I'm ready to stretch myself beyond what I thought my capacity could be in the form of choosing life goals that terrify me.

I was throwing aReset Your Life event in New York that was meant to encourage attendees to not be afraid to press reset versus settling for a life they no longer loved. Although I sat alongside a phenomenal panel of women, I couldn't help but think, What am I doing here? I need to be in the audience. I need to be the one being inspired.

And then it happened.

Best-selling author and Karma Bliss founder Devi Brown turned to me and said a few words that would change my life:

"Necole, you carry yourself with such humility, that you never stand in the fullness of who you are and say 'look at what I'm doing.' But to change your life…

"It was so successful to stay where you were, but you chose DISCOMFORT. And all of us should be that courageous."

At the time, I didn't understand the magnitude of her words. But today, it has become a key component to my journey.

I could have stayed where I was. Where it was safe…

During that time, I was 36 years old and enduring one of the lowest years of my life. I was coming off of my first year of pivoting from running the very popular celebrity gossip blog, NecoleBitchie.com, to launching what is now xoNecole.com, a motivational media empire.

And the future wasn't looking so bright.

A month prior, I had just told the world in an emotional video titled, "What They Forgot To Tell Me About Leaving A Successful Brand", that I was literally struggling with rebranding, and the headlines that followed made me feel as if failure was looming. I started questioning everything: my decision to publicly and abruptly shut down NecoleBitchie.com, my decision to launch a new venture so soon (while swallowing up my own money and resources), and my willingness to go broke to see my vision come into fruition.

Looking back, I'd rather live a few years in discomfort, than live a lifetime of suffering knowing I deserved more than the life I had settled for.

Fast forward to present day, and I am coming off of one of the most progressive years of my career. In 2019, xoNecole moved its headquarters to Atlanta. We launched events such asPajamas and Lipstick - a first to market Girls Night In Experience,ElevateHer - a curated festival celebrating women-owned brands, and the Table of 50 FoundHers Brunch. We also launched popular videos series likeBoss UpandManCrave, and ended the year introducing ourHappy Hour Podcast which peaked at #6 on Apple Podcast All Time Relationship charts. As we've blossomed, our readership has quadrupled, surpassing the audience of my former gossip site.

There were features in Forbes, HLN/ CNN and BET.

And we added a few phenomenal women to the team! 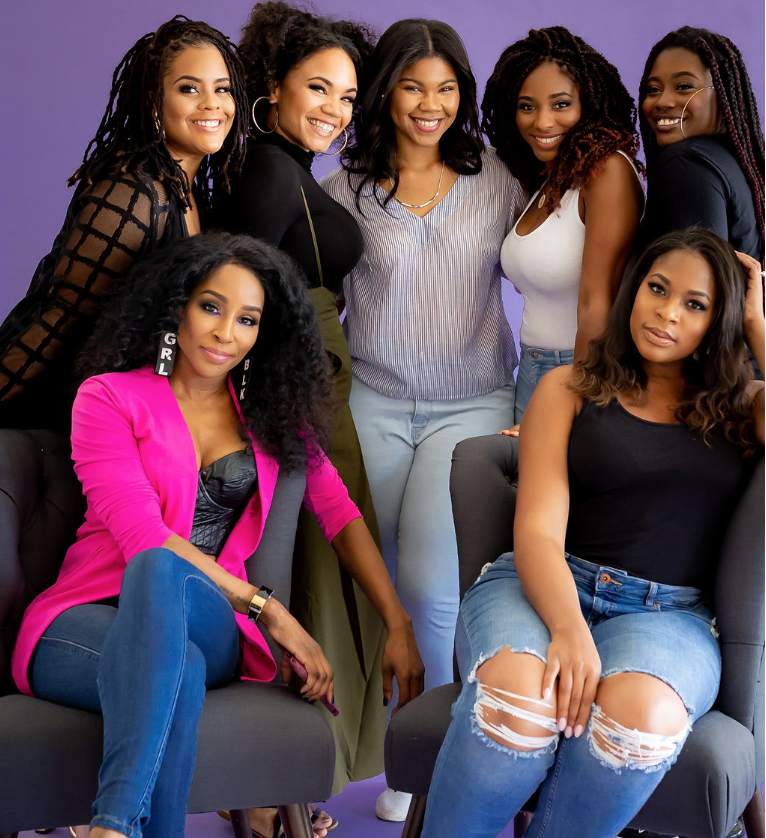 We would have never experienced this success had I given up in 2016.

I wanted to share this as a reminder to keep going!

If you are about to make a major life pivot or are switching career paths, just know, it will be uncomfortable, but you have to be willing to live in that space! That's where you are going to build the muscle you need to climb to the next level of your life.

That's where you are going to grow.

I'll end with this:

In 2020, I'm ready to stretch myself beyond what I thought my capacity could be. But this time, it'll be in the form of choosing life goals that terrify me.

I'm sharing them with you for accountability.

I'm committing myself to:

Rooms that are filled with Black Girl Magic is where I feel at home and the most comfortable. But it's time for me to use my influence to pull up in rooms where there are people who do not look like me, so that I can be a voice and create more seats at the table for black women.

Now that I've shared my terrifying goals, I'm ready to hear yours. What are three goals that terrify you? The three goals that you know that if you work to accomplish them, they would push you to the next level in your life, career or relationship?

I want to know!

Drop me a comment on Substack (I'm housing my weekly newsletters to you guys there) or leave me a voice message onspeakpipe! (I'll return the favor and leave you a voice message back!) You can also keep up with me on Twitter orInstagram @hellonecole.

Let's hold each other accountable and claim that 2020 is the year of tremendous growth, and showing up in the fullness of who we are!

Necole Kane is the founder and Editor In Chief of xoNecole.com. After spending 7 years as a successful celebrity gossip blogger, the Maryland native launched xoNecole.com with the mission to promote positive images of women of color as well as empower, educate, and inspire millennial women to live their best lives. Keep up with Necole on Instagram and Twitter@hellonecole, or through her personal website NecoleKane.com.

Idris Elba and Sabrina Dhowre Elba are gearing up for the second season of their podcast Coupledom where they interview partners in business and/or romance. The stunning couple has been married for three years but they have been together for a total of six years. During that time, they have developed many partnerships but quickly learned that working together isn’t all that it’s cracked up to be.

Before she was Amira Unplugged, rapper, singer, and a Becoming a Popstar contestant on MTV, she was Amira Daughtery, a twenty-five year-old Georgian, with aspirations of becoming a lawyer. “I thought my career path was going to lead me to law because that’s the way I thought I would help people,” Amira tells xoNecole. “[But] I always came back to music.”

A music lover since childhood, Amira grew up in an artistic household where passion for music was emphasized. “My dad has always been my huge inspiration for music because he’s a musician himself and is so passionate about the history of music.” Amira’s also dealt with deafness in one ear since she was a toddler, a condition which she says only makes her more “intentional” about the music she makes, to ensure that what she hears inside her head can translate the way she wants it to for audiences.

“The loss of hearing means a person can’t experience music in the conventional way,” she says. “I’ve always responded to bigger, bolder anthemic songs because I can feel them [the vibrations] in my body, and I want to be sure my music does this for deaf/HOH people and everyone.”

Amira Unplugged and other contestants on Becoming a Popstar

In order to lift people’s spirits at the beginning of the pandemic, Amira began posting videos on TikTok of herself singing and using sign language so her music could reach her deaf fans as well. She was surprised by how quickly she was able to amass a large audience. It was through her videos that she caught the attention of a talent scout for MTV’s new music competition show for rising TikTok singers, Becoming a Popstar. After a three-month process, Amira was one of those picked to be a contestant on the show.

Becoming a Popstar, as Amira describes, is different from other music competition shows we’ve all come to know over the years. “Well, first of all, it’s all original music. There’s not a single cover,” she says. “We have to write these songs in like a day or two and then meet with our producers, meet with our directors. Every week, we are producing a full project for people to vote on and decide if they’d listen to it on the radio.”

To make sure her deaf/HOH audiences can feel her songs, she makes sure to “add more bass, guitar, and violin in unique patterns.” She also incorporates “higher pitch sounds with like chimes, bells, and piccolo,” because, she says, they’re easier to feel. “But it’s less about the kind of instrument and more about how I arrange the pattern of the song. Everything I do is to create an atmosphere, a sensation, to make my music a multi-sensory experience.”

She says that working alongside the judges–pop stars Joe Jonas and Becky G, and choreographer Sean Bankhead – has helped expand her artistry. “Joe was really more about the vocal quality and the timber and Becky was really about the passion of [the song] and being convinced this was something you believed in,” she says. “And what was really great about [our choreographer] Sean is that obviously he’s a choreographer to the stars – Lil Nas X, Normani – but he didn’t only focus on choreo, he focused on stage presence, he focused on the overall message of the song. And I think all those critiques week to week helped us hone in on what we wanted to be saying with our next song.”

As her star rises, it’s been both her Muslim faith and her friends, whom she calls “The Glasses Gang” (“because none of us can see!”), that continue to ground her. “The Muslim and the Muslima community have really gone hard [supporting me] and all these people have come together and I truly appreciate them,” Amira says. “I have just been flooded with DMs and emails and texts from [young muslim kids] people who have just been so inspired,” she says. “People who have said they have never seen anything like this, that I embody a lot of the style that they wanted to see and that the message hit them, which is really the most important thing to me.”

Throughout the show’s production, she was able to continue to uphold her faith practices with the help of the crew, such as making sure her food was halal, having time to pray, dressing modestly, and working with female choreographers. “If people can accept this, can learn, and can grow, and bring more people into the fold of this industry, then I’m making a real difference,” she says.

Though she didn’t win the competition, this is only the beginning for Amira. Whether it’s on Becoming a Popstar or her videos online, Amira has made it clear she has no plans on going anywhere but up. “I’m so excited that I’ve gotten this opportunity because this is really, truly what I think I’m meant to do.”

As her fame continues to rise, Tiffany Haddish has remained a positive light for her fans with her infectious smile and relatable story. Since Girls Trip, fans have witnessed the comedian become a modern-day Cinderella due to the many opportunities that have come her way and the recognition she began to receive.

Staying grounded is one of the actor's biggest priorities.

Cree Summer Opens Up About Being A Single Mother: ‘You Find What Sisterhood Is About’