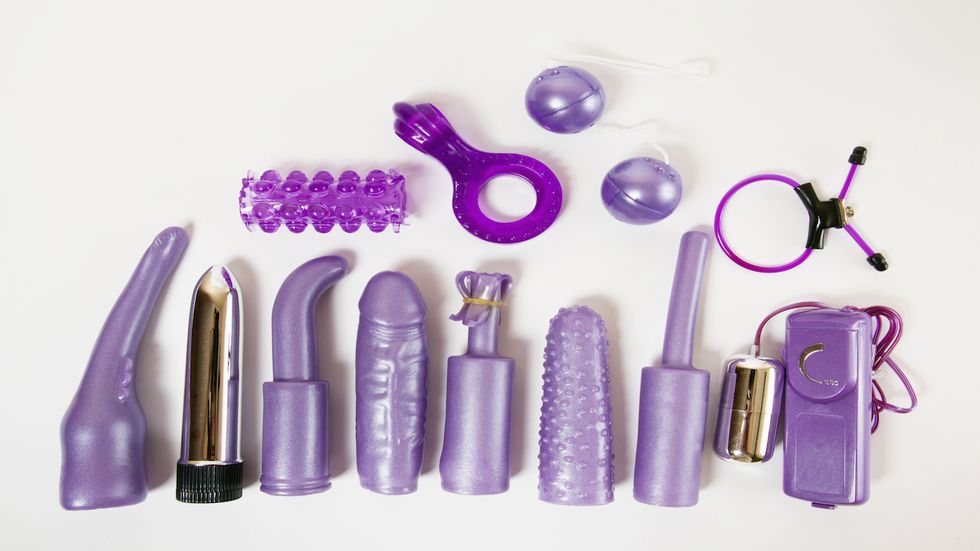 So Your Man’s Not Feeling Your Sex Toys, Here’s How To Change That

The other day, I was having a conversation with some of my girlfriends about the topic of sex toys, and somehow, we came across the fact that sometimes men aren't so into it. I was taken by surprise because every man I've been with has never objected to me whipping out my sex toy box and choosing what to play with for our evening of kinky fun. But, to hear that some guys have attested in the past for her piqued my interest quite a bit and I decided to take my curiosities to the street to speak to some random guys about their feelings on the subject at hand.

I got very mixed feedback.

The first guy blatantly and outright said, "Hell no." Another guy shared the same feeling and added the question of, “Why would she need me if she has that?"

One guy grew mildly interested when vibrators were introduced, and I noticed that pattern more and more as I talked to men closer to me in age. I came to a conclusion that, 1) yes, with age, some men are very set in their ways and sometimes irrevocably so, but that 2) it is not necessarily that guys aren't open to it, but instead that maybe they haven't been introduced to sex toys in the right way. So either way, it's worth exploring together to see which category your guy fits into.

Ease them into sex toy land the right way and ensure him that the toys are for mutual pleasure and you can have whatever you like. Always.

“I feel everyone should be open-minded to incorporating sex toys in the bedroom. I know for men it can seem a bit taboo, as we often attach an ego to our sexual ability. But it does not take place of you, rather, it is a bonus or a helper. And I believe men should be open to some of the sex toys being used on them. My fiancé has a small vibrator and it can be used to stimulate both you and her. It all comes down to communication and willingness to try new things. When you're willing, it can benefit in not just the bedroom, but the relationship itself." – DaVion Lee, @daeizm

A c-ring is a great couple's version of the popular sex toy and can be used for mutual pleasure too. Shop together at an adult novelty store or online and pick out items that interests you both. He might be more interested in things to use on you like restraints or a whip, and that can be your “in" to introducing him to sex toy playland. Men are incredibly visual creatures, so watching you play with yourself is another way to get what you want. Entice him by giving him your own version of a Red Light Special featuring you and your sex toy.

He'll bite his lip and salivate at the way you're writhing against the sheets without him and immediately want to tap in to join in fulfilling your fantasy. Seductively say, “Come here," or express your lust for him in some other way: “I can't come without you daddy," in a breathy voice is a line that never fails, he'll come. Then you both will.

“Just like within any relationship, you have to condition your partner to certain things. If your man's not into it, try to find a compromise in the form of reciprocity. If you try this, I'll try that… If you try that, I'll try this. It might not even be a feeling of inadequacy on his part; he might not be something he's into. Warm him up to it. If you want to try a c-ring, condition him to it. I wasn't always into trying a c-ring; I had all of these thoughts about my dick exploding, but she coaxed me into it and I tried it." - Michael

Most men are down when you help them to see the light. Tell him, teach him, guide him to that waterfall girl. I'm certain he'll oblige.