Not many moons ago, society would've deemed Rihanna a maneater.

Hell, I'm willing to bet there are probably some people who would say the same thing at this very moment as news has broken that Rihanna has allegedly broken the heart of another man, and a billionaire at that. The public will hang onto the words of Media Takeout's source who claimed:

"It was a good relationship, but now it's over. Of course Rihanna broke his heart. That's what she does: break[s] men's hearts. Rihanna just got tired of him. She gets tired of men sometimes."

With that, can we take a moment of silence just so that the people in the back can hear my sigh of disappointment at this sexist logic? Okay. Now that we've done this, let us carry on because I'm about to count all of the ways that Rihanna is one of the best role models on the scene right now and not just for black women, but for women of all ethnicities.

I've said on several occasions that I prefer Rihanna over Beyonce, simply because it's abundantly clear that she practices what she preaches via lyricism. She embodies her art and the message that it sends, which if we're being frank can be summarized in four small words: eff you, pay me.

Rihanna is about her coin and while she's in the zone, men are secondary to that.

She has learned the lesson many of us are still trying to master and it's that we should be content with focusing on our goals, happiness, and financial security. The men and love? That stuff will follow effortlessly once we put more energy into wholly filling our own cups. Furthermore, being single is not something to be ashamed of but something to celebrate and a time to enjoy, regardless of what your end goal is.

Through thick and thin, Rihanna has taught us so damn much about love and is goals for our inner girl bosses dying to break free of the f*ckery of social conditioning. So, let's get into it with these 5 things that we can learn about love from the Queen Rih.

Being a modern woman is met with the conundrum of being told to have our own in one breath, but then having the world and the media criticize women for taking the necessary steps to secure their own. We suddenly become "too" independent, right? Which is why the fact that Rihanna has a bag and a half all by her damn self is not enough, the media is fixated on the fact that she had the audacity to end things with her wealthy boyfriend. 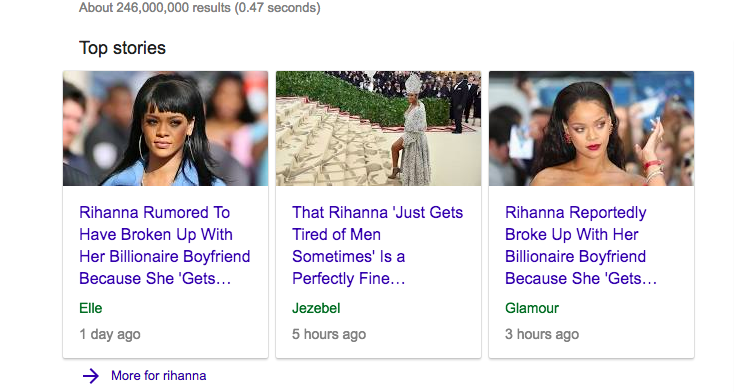 Apparently women should find the company of men desirable in the presence of a big bank. Ever since her futile relationship with Chris Brown back in the day, Rihanna has spent a great amount of time denouncing love (remember the "Eff love" interview?) for the time being and working to build an empire of her own, through entertainment and fashion alike. She is, if nothing else, a role model and lesson in independence.

All too often the world we live in tells us that we should have a man to take care of us, back us, and love us. Rih has taught us that the only person you need for all of the above is your damn self.

2. Sensuality is Not a Sin.

Post-"Pon De Replay" Rihanna is all sex, unapologetic, and has no f*cks to give any hater. Black women are historically condemned for the way they choose to be sexual -- you're a hoe or you're a prude. And, unlike our white counterparts, we can never simply just be and live in the sexual truth of our desires. Everything about Rihanna helps to silence the shame surrounding black women's sexuality. She's got each of us chanting how amazing sex with us is and she's created an equally saucy lingerie line that helps to reinforce the sexiness of black women by catering to all shapes and sizes. I could go on all day here, but really, her sexual empowerment speaks for itself.

With a very public and messy parting with Chris, we got a glimpse of how Rihanna rebuilt herself after the on-again-off-again relationship. And then, we rooted on an annual basis for her and Drake to make things official because bigger than finding a man with deep pockets is the emphasis on asking women to choose a good man. We spun the "good guy" storyline super hard when she curved Drake upon professing his love to her on national TV, without considering how embarrassing that was for Rihanna, until she copped to it her Vogue interview. We often guilt trip women when they admit to the disconnect they feel with men because they might be the one. We insist that they force an attraction because they're being "too picky" all in the name of keeping a proclaimed "good guy." We chose to ignore that all of the signs pointed to a greater disinterest in Drake, rather than interest (as she's been curving him for years).

However, she has seemingly never let her choices in men or men's choices in her to put a value on her worth. She's realized early on that her worth is not tied up into any one man or the perception of that man. This makes it easier for her to walk away when her gut speaks to her, like it does for so many of us. Bringing me to this next point:

4. Settle for Nothing or No One

Call it breaking hearts or whatever, but Rihanna has the balls (and rightfully so) to do what so many people refuse to do, and that's let someone go instead of feigning interest that's just not there. Even as we see Rih dating, it's clear that she still has one focus and one priority: her happiness. You can't achieve happiness by staying in relationships that no longer serve you whether that be socially, romantically, spiritually, or any other way you deem necessary. Stop settling for men when you see red flags. Stop settling for men just because they feed you (and that's literally the only thing you enjoy about them). Stop settling for unhappiness, in hopes of garnering it through men. Stop settling, period.

5. Single and Shame Are Not Synonymous

Last but not least, stop being ashamed of your single status. Whether you hope to attain a relationship or not, your singledom does not need to be explained to a soul. Our ancestors fought too damn hard for us to not enjoy the perks of being a working woman, so really let's take this time to do so. Like Rihanna, we can have the pick of the litter when we're genuinely ready for it.

But, what we're not going to do is allow the shame of being single force us into relationships that just don't fit. Rih has always been an advocate for singledom. In fact, during a 2015 interview with Elle, Rihanna said she'd wait forever before she settles for some hot ass mess of a man and I feel that those words were genuine. She's always seemed comfortable and unbothered by being single. That's something that feels very difficult for women at times, myself included.

Nonetheless, we too must learn to trust the process.

What Is Human Design & How To Use It To Increase Intimacy

For some time now, the Human Design System has been picking up mainstream traction! And like so many other explorative journeys, the concept of Human Design took off via social media. Similar to Astrology, Human Design requires your birth time and date, and it also provides a map of sorts to help you navigate this world with purpose while being uniquely you (and tapping into your purpose). In fact, if you desire, the information can work simultaneously with Astrology.

Saweetie Shares Her Three B’s For A Healthy Life

The more Saweetie prioritizes her mental health, the more gems she drops in the process. The “Icy Chain” rapper has been open in the past about her mental health struggles due to being overworked and not properly taking care of herself. After having a few mental breakdowns, she has been on a mission to put her health first and focus on self-care.

These Black Women Are Shifting The Narrative On Wellness

Black women have been redefining what wellness looks like since the beginning of time. (I even have a real-life, sassy, still-walking-signifying-driving-gardening example of this via my own 92-year-old Granny, who is the epitome of manifestation and self-preservation, as she has always defined wellness on her own terms.) We continue to shift the narrative, especially when it comes to what "wellness" actually means as a Black woman in a world where it can be so hard to simply exist in fullness.

Idris Elba and Sabrina Dhowre Elba are gearing up for the second season of their podcast Coupledom where they interview partners in business and/or romance. The stunning couple has been married for three years but they have been together for a total of six years. During that time, they have developed many partnerships but quickly learned that working together isn’t all that it’s cracked up to be.