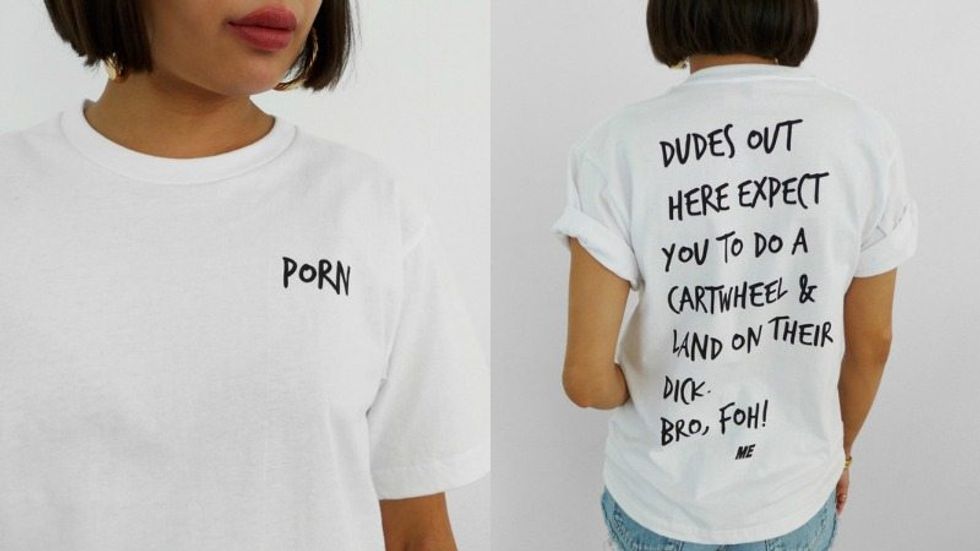 Sexpectations can be stressful.

Sexpectations can be stressful, right? Recently, designer and your royal flyness, Melody Ehsani dropped a new tee for the 2016 and let's just say the PSA couldn't have "come" at a better time.

"Dudes out here expect you to do a cartwheel and land on their dick. Bro, FOH! --M.E."

Ahh, simplici-tee at its finest!

Melody also goes deeper into the tee's description, breaking down the meaning and inspiration behind the shirt, regarding the distorted lines that separates computer love from real lovemaking:

If this isn't the truth! And per Mel's suggestion to "talk about it," we're going to do just that!

1. Distorted Male Body Images: the idea that the size of a male's member is the leading factor in measuring your pleasure. When in reality, camera angles play a huge role in how a penis looks on a monitor. Not to mention, it's not always fair to lose interest based on inches.

2. Distorted Female Body Images: The same goes for women feeling like they need to be insanely curvaceous and have fake breasts and/or butts in order to be desired. All shapes are beautiful, and your partner should love and cherish you as is!

3. Party of 3: Sex between two people is so 90's... according to porn these days. Pornography will have you thinking that a party of two just won't do, and that casually throwing in a third person is clutch for a climax. But not so fast. Sex is a beautiful bonding of the bodies and a very personal act. Unless this is something you and your partner both agree to, no woman should feel pressured into inviting someone else into their bed. Just ask our relationship writer, sometimes less is more when you're trying to score. And the extra sweat isn't worth the regret.

5. Duration: Pornography is a movie- literally. And most of us know this. However, something about trying to "recreate" a movie seems to be goals for those going at it in the bedroom. Especially when you're young and impressionable. Truth is, after foreplay, the actual act of sex can last a anywhere between a satisfactory 3 to 7 minutes. Don't believe us? Peep how "Most women are here for 5 minute sex."

All in all, it's okay to watch a good movie but it's important to know the difference between pause and play. The dangers of such explicit exposure for most adolescent and teen introduction to intercourse, is that it is much less a setup for a healthy sex life later, than it is a disaster. Long gone are the days where the "first time" was once portrayed in movies by high school seniors who, although inexperience, at least had enough sense to keep it sensible and sensual more than anything.

Even rapper J.Cole recounted losing his virginity in his track, "Wet Dreamz," where he rapped a few lines about his first time, admitting he felt pressure to satisfy his partner, who herself was a virgin: