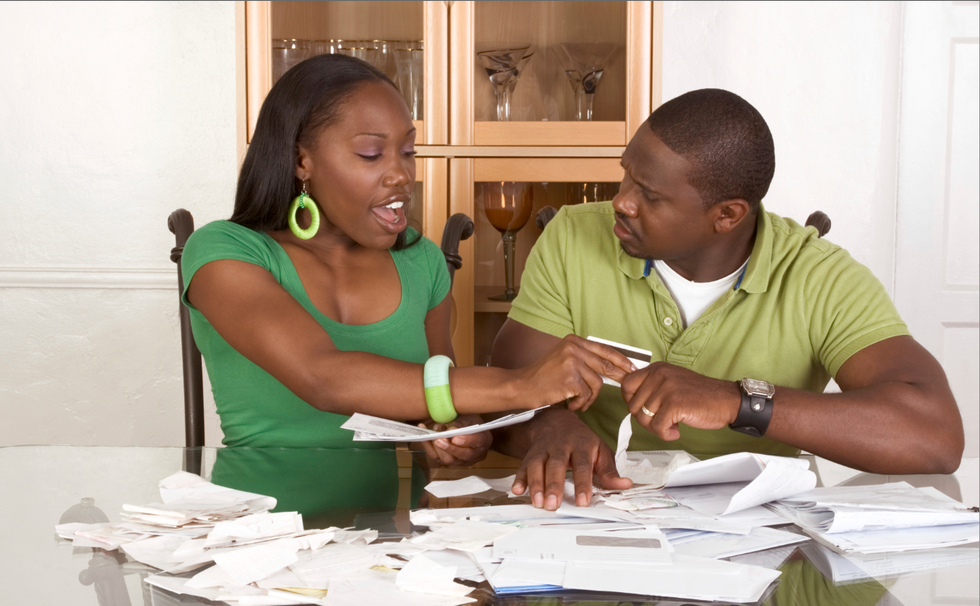 How Important Is It To Be Financially Independent In A Relationship?

If you're cohabiting or married, the conversation on if you should have your own or depend on someone, always comes up. xoNecole weighs in.

I never really considered the notion of saving for a rainy day until I went through my own struggles with money. As a child, going shopping for school supplies filled me with both anxiety and excitement as the thought of having tons of fresh, unopened items meant the start of something new ahead. As an adult, August signifies the beginning of my wallet dwindling in preparation to send my sons off to school again.

When my significant other and I couldn't start our kids off with what was supposed to be mandatory for their first week, my inner guilt came across as fury towards my children's father. I blamed him for not having enough to send just one off with everything he needed, cursed him for not making enough to make ends meet, and argued with him over bank statements and spending habits from months prior. In hindsight, he did the best he could with what he had and his response to my tangent reminded me of a lesson I learned through observation growing up: "What do you have? Where is your money?"

A girl has to have her own, right?

I recently spoke to a friend who told me about some financial roadblocks she's hit. She was a stay at home mom who worked really hard to maintain her household including raising her two daughters alongside her husband. They were now faced with living with in-laws or moving into a shelter. Without prying into any of her business she did not expose herself, I listened to the weariness in her voice as she told me stories of depending heavily on her husband.

"I didn't think to work. He took care of anything me and the girls wanted and needed, and I grew comfortably into life at home, without a job," she told me. I've heard this story too many times before. I sympathized with her, trying the stay-at-home mom move myself and realizing a mere a month and a half in that I had to support my own family, even if my partner did work.

There were things I wanted for myself that I could not buy. I grew accustomed to sticking my hand out to my partner for money and in a cycle of asking for things excessively, my partner felt frustrated and eventually, rejected my demands. What did I have for myself? What was I doing for myself?

Through my own experience and taking my friend's account of dependency into consideration, I was led to ask several married women and stay-at-home mommies about their thoughts in relying on their partners. Many had careers and suggested having separate bank accounts to avoid the headaches and hassles of finances. Some found purpose in their lives in raising their children at home and still held their own from past jobs that didn't allow them to be contingent on their spouses paycheck. Others reminded me of trust and the significance of that part in traditional wedding vows that swears you tough it out for richer or poorer. "For me, I have to believe my husband won't leave me without anything, especially with children, because we made an oath before God," one girlfriend told me.

In watching my mother marry someone with a much higher credit score and more stable lifestyle, who later divorced her and left her in a financial bind that affected immediate family members, I've become slightly cautious of putting all my faith in one basket and living off of someone else's income. I don't ever want my reality to suddenly shift because my world was wrapped in someone else's and I couldn't do for me. As a young girl, I did bad all by myself, and as a woman, I know the importance of having your own.

Read what these five ladies had to say about the importance of women having their own, trust, and financial dependency:

I have always been independent, down to changing my own motor oil. When I got married, that didn't change–I just learned to combine my powers with his. The freedom of being able to buy what I want without having to explain why is awesome. Plus if he ever falls short financially, I have the power to pick up the slack. – Kimani Fisher-Wynter

Too often a woman “having her own" in a relationship is positioned solely as financial independence. But, we forget that money is tethered to other aspects of our lives. Obviously having your “eff you" money in place is important. But, having your own is also about mental and emotional independence. Financial freedom equates to freedom in so many other arenas of your life. There's peace of mind that comes from knowing you have options. – Tyece Wilkins

The first time I realized that women were supposedly an extension of their man was post nuptials when a woman asked me "so, who are you married to?". That immediately gave me pause because I am my own woman and although my husband is an amazing man, he is my partner, not my parent. I never knew that some women were assumed to be codependent because my mother was always very independent and my husband's mother was as well. I have never felt like I had to choose my relationship over my career because I married a man who wanted an independent and capable woman. I think that is one of the most important parts because it is difficult to have and maintain "your own" if you are with a person who wants you to rely solely on them. As the director of an education nonprofit, I am many things to many different people. It certainly helps to know that I'm married to someone who supports that and is not envious or annoyed by it. My independence is not a burden to him but a blessing, and I love him for it. – Brittany Brady

At 28 years old, I will be celebrating 6 years of marriage this Fall. I've worked outside of the home and have also had the pleasure of being a stay at home mom for over a year - a personal choice that was very important to me. While I now take pride in being able to significantly contribute to my households income, I never felt less than when I wasn't bringing in a check as a SAHM. Being home gave me a chance to re-group, figure out exactly what I wanted to do and most importantly bond with my baby. I also financially prepared to be home, so I made it a point to have my own and even started a successful small business from my kitchen. My clique of millennial mommy friends all have hustles and business' that we run when our families are asleep - it's all about maintaining a sense of self. – Jhéanell Adams

I've been a stay at home mom for roughly nine years and being financially dependent on my husband is honestly the best fit for the vision we have for our family. It's our highest priority for me to be home raising our children and my mind to be fully dedicated to that at this point in our lives. So, while he's out making the money to support our family, I'm home building the foundation for our lives–emotionally, spiritually, and academically. Sure, it hasn't always been easy not having my "own" money to do what I please, but at the end of the day, the bigger picture requires a joint effort, and my contribution doesn't require a financial aspect. Sure, I worry about the what if's, but aren't the most financially independent people as well? I mean we live in an unstable world. I definitely try to take the time to stay abreast with the job market, to better myself and hone my skills so I'm prepared when and if the time comes that I may need to support myself and my family. I trust that it will be okay. I trust that my husband will hold it down while he has to, and in the event that he can't, I trust that I'm resourceful enough as a person to pick up the pieces and do what I have to. Having a trustworthy partner and having the utmost confidence in yourself is what makes financial dependency a somewhat easy pill to swallow. – Tiffany Perez-Figueroa

Should you have your own or is it okay to depend on your significant other? Let me know your thoughts and share your own stories in the comment section below!

*Editors note: this article contains information about sexual assault, child pornography and rape. Please read with care. If you have experienced sexual violence and are in need of crisis support, please call the RAINN Sexual Assault Hotline at 1-800-656-HOPE (4673). If you are thinking about suicide, please call the National Suicide Prevention Lifeline at 1-800-273-TALK (8255) or the Suicide Crisis Line at 1-800-784-2433.

Halle Bailey and her boyfriend DDG are one of the cutest celebrity couples in the game right now. After confirming their relationship in March 2022, Halle, 22, and DDG, 24, made their red carpet debut as a couple over the weekend during the 2022 BET Awards. In an interview with Extra, The Little Mermaid star shared that she was “nervous” about their debut. “We’re like tryna figure out what we were going to wear. All this stuff,” she said. The couple matched each other’s fly with both wearing all-black outfits.