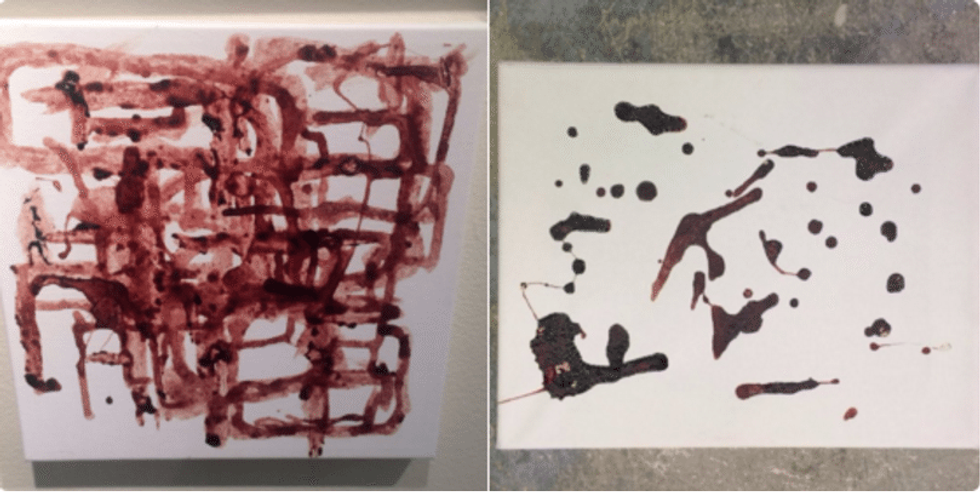 Period Paintings: Why One Artist Is Using Menstrual Blood For Art

Paz fittingly named her photo series awaiting her menstrual cycle, and used her menses as paint on a blank canvas to create her perception..

Samera Paz has always been into art. Her personal Tumblr account is a compilation of black and white photos, bright hues here and there, and perfect lighting. She's a 21-year-old who lives through photography and was featured in Dazedin late 2015, but Paz has been the talk of the art world with her new collection, “One Week Late."

Paz fittingly named her photo series awaiting her menstrual cycle, and used her menses as paint on a blank canvas to create her perception of art. Her first piece is a splattered portrait of dried blood created in hopes of destigmatizing women's bodies and normalizing periods. In case you think she's just a narcissistic millennial seeking attention for her work, Samera drops a little knowledge on her Instagram account about the origins of “period paintings."

She also tells Cosmo, when a delayed period finally arrived, she was “relieved and full of so much emotion."

“The urge to create something was present and I instantly knew what I had to do. Periods are natural and what better way to normalize them than use it as a medium. I want people to feel something when they see my work. It could be disgust, joy, inspired or confused...just as long as they feel something."

My way of normalizing periods and turning blood that would just be discarded into something I consider beautiful ⭕️ pic.twitter.com/6c3SaQ8VER — Samera Flowers (@nahpeach) February 3, 2016

And her controversial pieces, which debuted on Instagram and Twitter, have definitely made both men and women feel everything from inspired, curious, outraged and queasy. A recent BuzzFeed poll showed readers agreed that it was art, but her social media accounts reveal how nasty (no pun intended) people have been to her. She's been called racial slurs and told to die, all because of art. Others have questioned if periods even needed normalizing and if this was simply a need to be more “woke" than everyone else. Is it radical acceptance or is it a cry for attention?

Related: Period Sex: Why Some Men Don't Have An Issue With It

But the artist isn't the first to get people talking about the boundaries in art. In 2013, Casey Jenkins introduced the world to vaginal knitting as her way “to address taboos surrounding female genitals" for her performance art piece “Casting Off My Womb." For 28 days, the Australian artist knitted wool out of her vagina–yes, even through her menstrual cycle.

Then, just last year, Kiran Gandhi ran the 26.2 mile London marathon without a tampon, soaking her pants all in the name of shifting the narrative on womanhood. She wrote about her experience on her website, saying:

“I ran the whole marathon with my period blood running down my legs. I ran with blood dripping down my legs for sisters who don't have access to tampons and sisters who, despite cramping and pain, hide it away and pretend like it doesn't exist. I ran to say, it does exist, and we overcome it everyday."

There's a method to the madness (or mess), but some may think that it's going too far! All three women, despite the backlash of how they chose to send a message, have stuck by their beliefs that they're defying the norm and breaking barriers with their art.

So, what's more important: the message or the messenger? Weigh in below with your thoughts on using menstrual blood for art.

The 5 Winter Nail Color Trends You're About To See Everywhere

Cozy season is here. Guess what that means? Winter nail trends. We know that spring and summer typically mean bright hues like neons, yellows, and of course, white nails. Who can say no to white toes? On the other hand, fall means deep colors like moody blues and skin-matching nudes. So what does winter have in store as we sip hot toddies and snuggle under our favorite blankets? Well, some trending hues are to stay along with more calming colors that evoke calm and, dare we say it, a feeling of coziness.

Any time we can see ourselves on TV, holding court, taking up space, and being our most beautiful authentic selves while doing so, it's always a good look. And it's more than just magic. For Monica McNutt, it's also a mix of hard work, determination, experience, and training. The University of Maryland and Georgetown University graduate was a shooting guard who decided she wanted to lend her voice to perspectives behind the scenes in sports through broadcast. She started out covering the Olympics during the summer of 2021, and she'd move on to work with Fox Sports 1, CBS Sports Network, Turner/NBA TV, and NBC’s family of networks. She was also a game analyst for the WNBA's Connecticut Sun.

Christmastime is here and what better way to spend the most wonderful time of the year than cozied up in blankets with a cup of hot cocoa watching a classic holiday film? Of course, there’s an almost overwhelming abundance of options available for one to watch during this time, but what makes Christmas particularly special is the return of tradition and nostalgia.

Julien and Kiersten Saunders met in 2012 while working for the same company and they quickly fell for one another. However, their whirlwind romance was cut short following an extravagant vacation. When they got home from Panama, reality set in, and they were forced to have a tough conversation about money after they both had different opinions on recouping the money spent on the vacation.