A few brave souls share their skydiving experiences and the zen facing their fears and conquering their goals made them feel.

They say the sky is the limit and for these brave few, that means literally!

Recently, we asked a few adventurous readers to tweet their skydiving experiences and we must say, the response was overwhelming. xoNecole readers and tweeters did not just sum up their dives from the sky in 140 characters. They sent video, photos and detailed anecdotes that only captured half of the moments. We were in awe at the emotion and background stories that inspired most of these brave souls to jump off a plane suspended 14,000 feet in the air.

While some skydived in seek of adventure and admitted that it started off as a mere feat to scratch off of their bucket lists, there were others who skydived to conquer their fears and for other reasons deeper than themselves. However, one thing all these beautiful souls had in common in the end, besides their desire to go higher, was the feeling of love and limitless inspiration they felt the entire seven minutes they were falling.

Skydiving is definitely something to try at least once if you're in your 20s or 30s. If you haven't yet, it might be time to take that leap of faith!

Peep some of our favorite stories below:

My mother and I use to talk about possibly skydiving together when I was a teenager. We both felt that skydiving was okay but bungee jumping was definitely out of the question (weird I know but the thought of bouncing back up just was/is too much for me). I found out some real life friends of mine actually felt the same way, and wanted to about do it as well! So for my 25th birthday three of my friends surprised me and said, "We're going to Vegas for your birthday and we're skydiving!"

Let me tell you, jumping from a plane was THE MOST BEAUTIFUL THING, I've ever seen next to the birth of my daughter. I'm very spiritual in the sense that I was touched by how small human beings actually are from up there. Just realizing that on a larger scale of things. We are just THAT small. It's so peaceful so serene. It was like nothing I've ever experienced. After my jump I immediately told my mother, and surprisingly she was upset at me for not taking her! We agreed that we would do it together for my next jump, no if's, and's or but's about it.

Unfortunately that day never came... My mother passed away early last year on April 14, 2013. She was cremated and initially I wanted to take her ashes with me on my next jump but that didn't work out, unfortunately. But on July 14th, four days before my 28th birthday, I went skydiving again and this time I went out in California where I currently reside. I immediately broke down thinking of my mother, and dedicated my jump to her.

I can laugh now looking back at it, but it again was one of the best, freeing, exhilarating, cleansing, and so worth it experiences I've ever had. Would I do it again? ABSOLUTELY!! I Hope this paints the beautiful picture of the world that is skydiving.

I'm not exactly what you'd call an adrenaline junky, but I do love adventure for no other reason than I like to be the girl to say I did something that most people I know haven't- like skydiving. Frankly, the only reason I did it was because I was running out of cool things to brag about.

That one minute of free fall with this miniature man on my back was without a doubt the most out of control I've ever been of my own body, yet I've never felt more in control. After the initial thought of “I've just jumped to my death", I realized I'd probably live and giggled tremendously between breaths on the way down.

[Tweet "It is truly unexplainable the level of peacefulness that took over my entire body."]

The opportunity to take in all of nature's beauty from OUTSIDE a plane 13,500 feet above is a feeling I'll never be able to fully articulate, but I can say, by far, it was one of my bravest and proudest moments.

Next up: Shark Diving. I do what I want.

Skydiving has always been on my bucket list because it seemed like the ultimate form of freedom and a crazy adrenaline rush! I'm not afraid of heights, but jumping out of a plane that's 14,000 feet in the air will make anyone semi-terrified. Once I got over the initial shock, I felt an inexplicable feeling of excitement and some sort of unspoken revelation. Being able to see the beautiful world from another view makes you realize that there's so much to see, do, and influence beyond our reach... and that is truly a life changing experience.

[Tweet "You realize that sometimes you just need to leap forward and take a chance."]

Don't hold yourself back, because anything is possible.

Will I go skydiving again? OF COURSE I will! I recommend skydiving and other outdoor activities to everyone! Sometimes you need to get out of the typical routine of life and try something different. Since then, I've gone white water rafting, swam with whale sharks, and zip lining, so there's plenty more in store for me!

My friends and I were discussing our 30th birthdays, which were all coming up within a year or so. We wanted to be more adventurous and someone mentioned skydiving as a possible activity. This discussion also lead us to develop a saying: “30 by 30", which entails completing 30 extraordinary things by our 30th birthdays.

Ultimately, a group of us decided to go for it and take on skydiving! I think we jumped from the plane at 14,000 feet in the air. After I jumped out of the plane, I was scared for the first few seconds, but then I became awestruck at the spectacular view and the idea of me gliding in the air.

[Tweet "I became awestruck at the spectacular view and the idea of me gliding in the air."]

It was definitely a life-changing experience and I would certainly do it again! #30by30 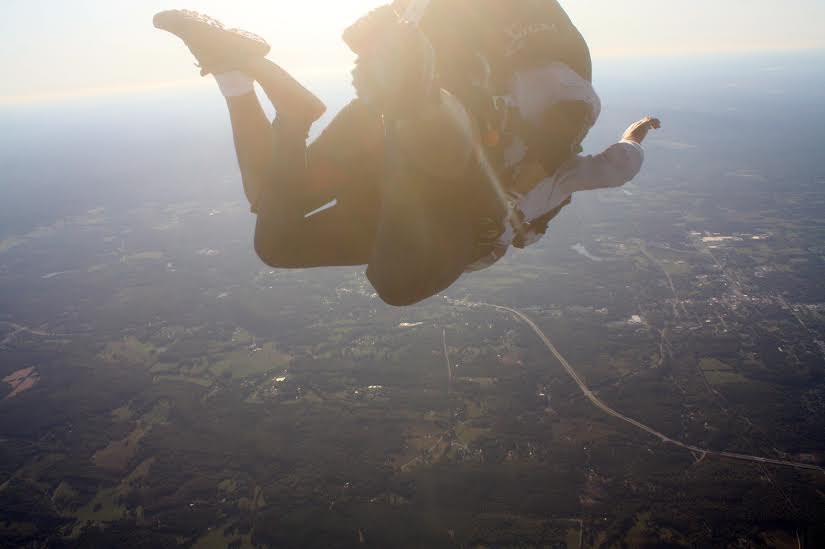 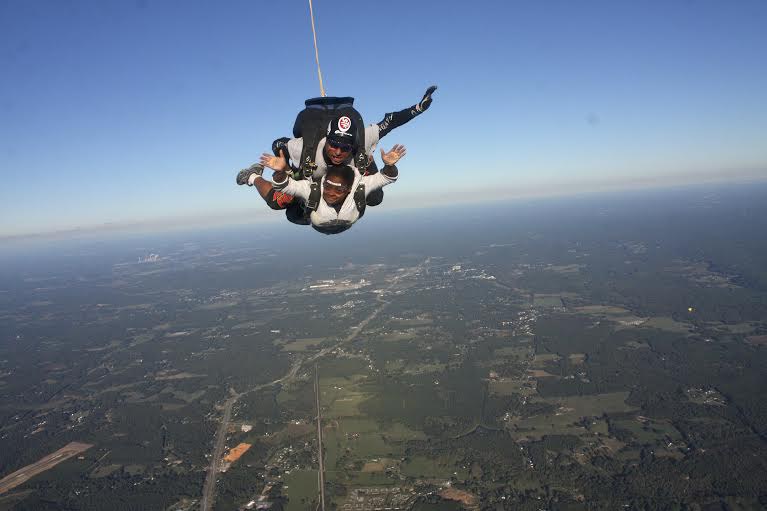 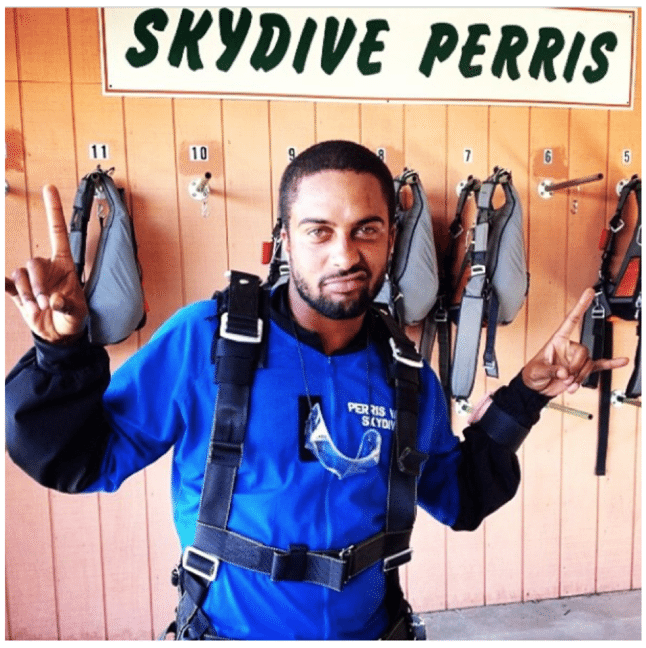 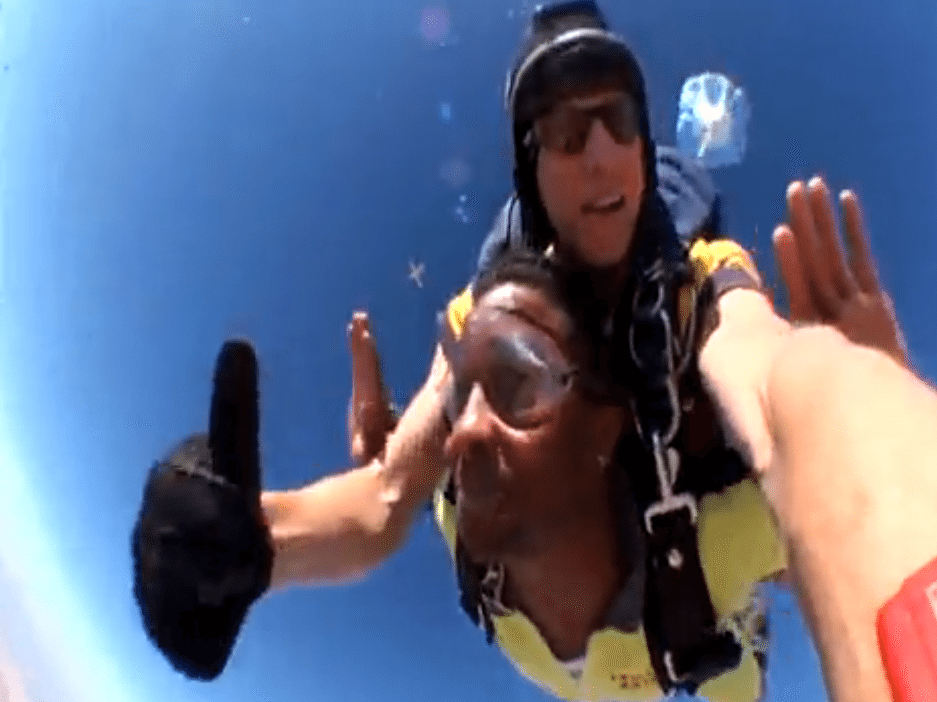 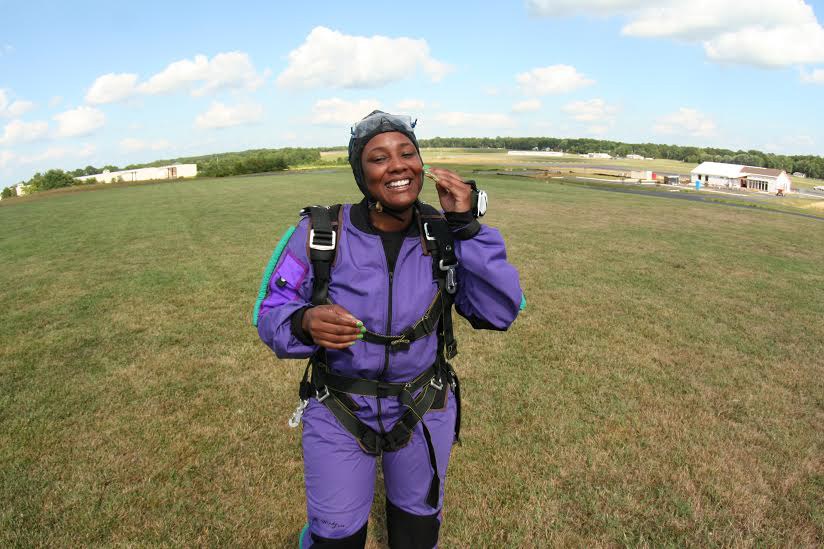 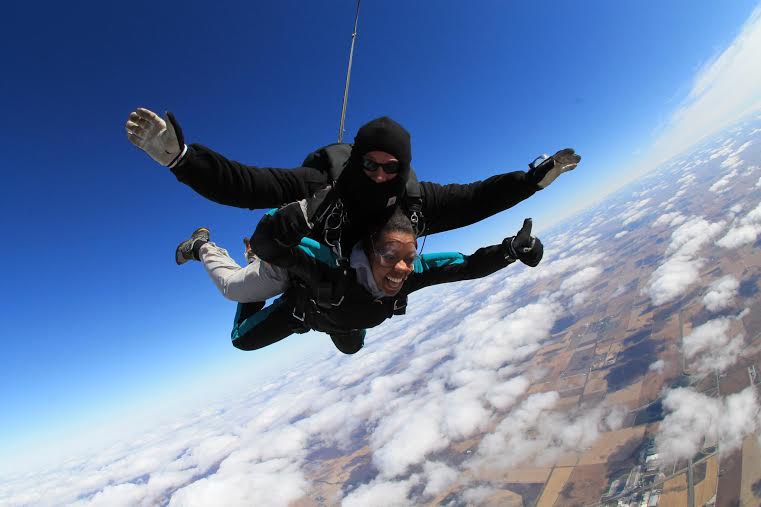 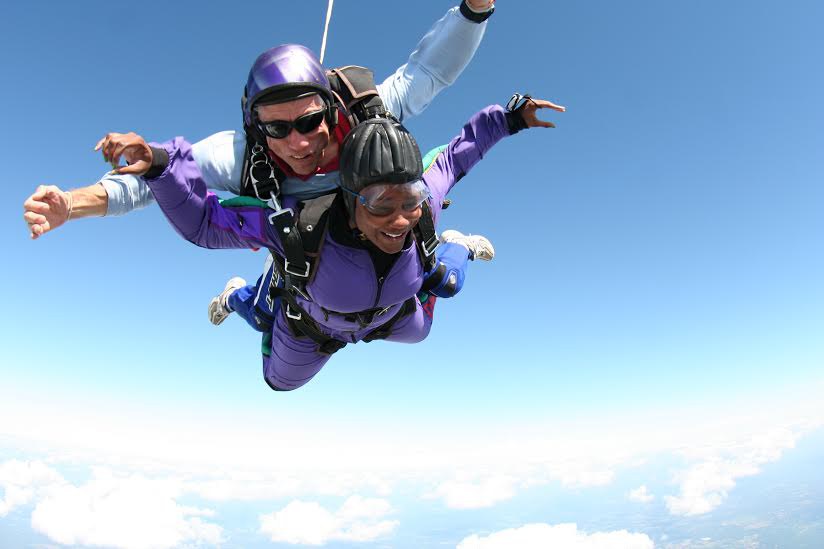 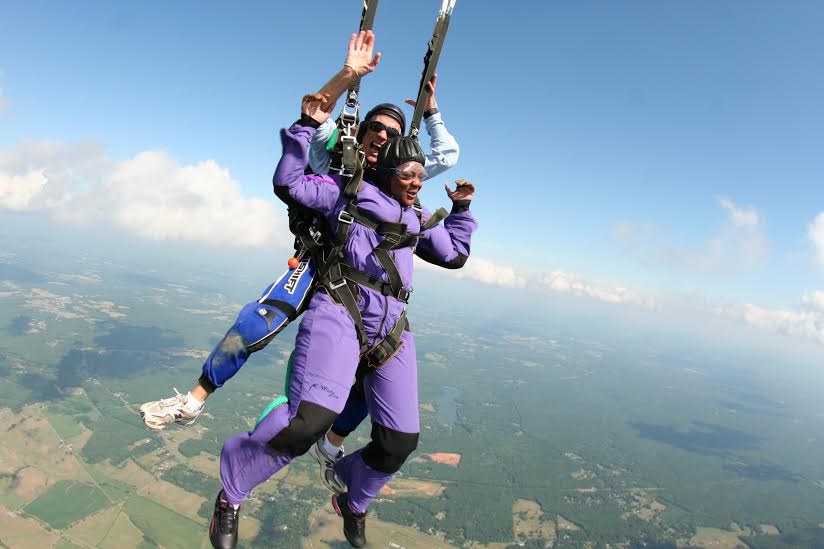 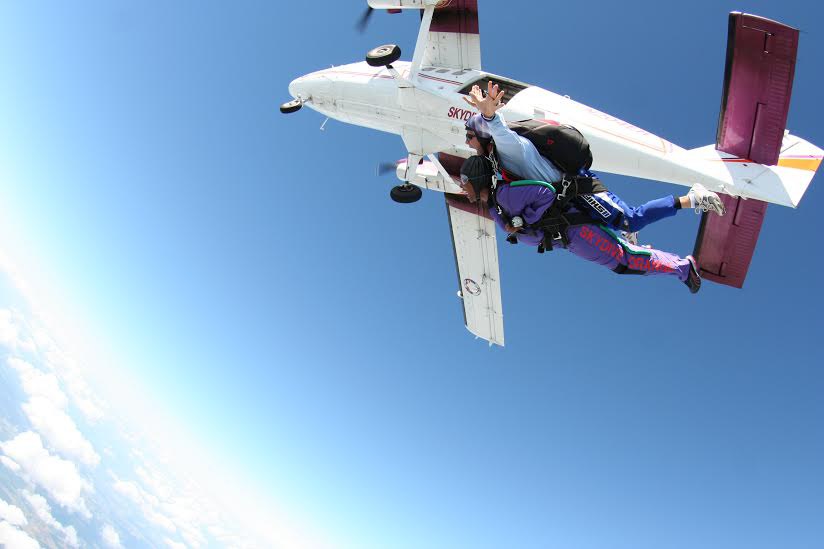 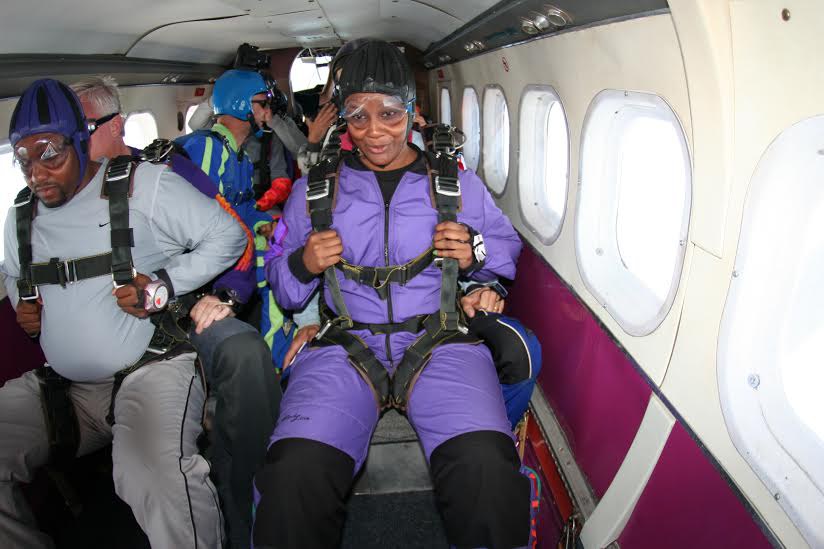 Have you ever skydived? Or done anything über adventurous for that matter? If so, we'd love to hear from you! Let us know your experience in the comments!

3 Tips For Creating A Clean & Safe Haven During A Pandemic

The Only 2020 Boot Trends I’m Wearing This Fall

Rock The Vote: Here's A Rundown Of Where Kamala Harris Stands On The Issues

Sometimes life's greatest journeys are the ones that begin without a roadmap.

Getting To The Bag With Wall Street Rapper Ro$$ Mac

Throw It Back Like A Zodiac: Mercury Retrograde, Horoscopes, & Tarot Reading Defined

All Of Our Favorite Halloween 2020 Makeup Looks So Far