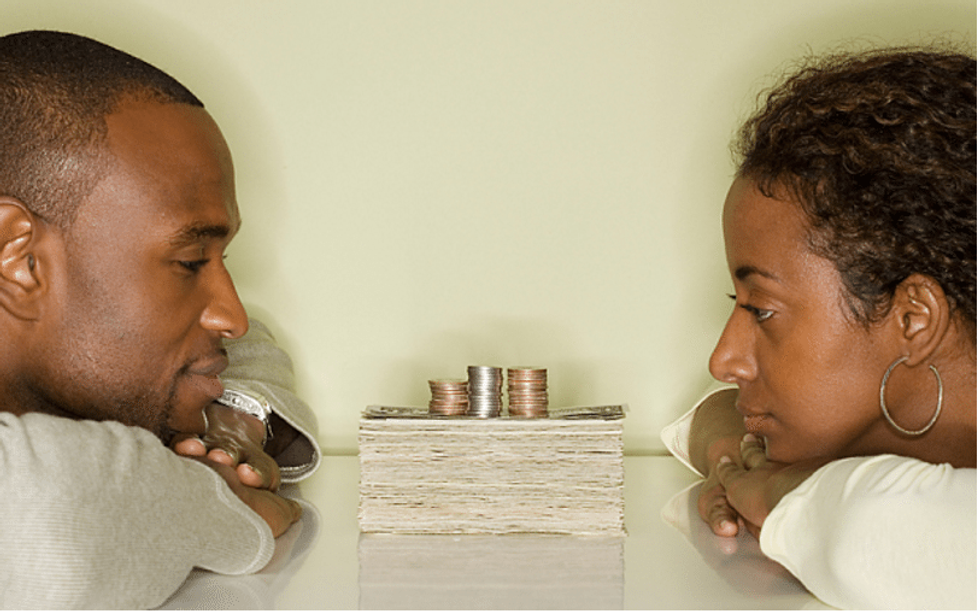 Overspending, debt and poor credit are some financial deal breakers some couples can’t get past.

Do you have more deal breakers than you do deal makers when it comes to your relationships?

We often talk about dating potential, but for many of us, we substitute red flags early on for hope that falls into the should've/would've/could'ves, ultimately leading to larger issues that are detrimental to the relationship in the long run. While some factors contribute to us turning a blind eye, like clinginess, regular communication with an ex, and a combative attitude, other things are considered definitive turn-offs when it comes to dating. We get into the nitty-gritty when it comes to sex, as it's one of the most named determinants that turn both men and women off when not done right, but what about something we all have to deal with, but don't like to delve too much into?

In a new report, GOBankingRates administered a Google Consumer Survey for all 50 states and Washington D.C. where adults were asked to choose their biggest financial deal breaker. Categorized into six divisions–one party doesn't bring into sufficient income, overspending, poor credit, being secretive about finances, one party being too cheap, and having excessive debt. The results?

In states where residents live paycheck-to-paycheck (Hawaii, California, and New York make the top 3), it's easy to see why a partner who overspends is noted as the top financial deal breaker, whereas states like Kansas, Mississippi, and New Jersey where residents are faced with the highest rates of poverty, have the lowest levels of financial knowledge, the largest credit card debts, and the highest rates of households that live beyond their means, avoid getting into a relationship where the person has too much debt to handle.

If you don't believe these things aren't of any significance in a relationship, guess again, with research showing disputes over finances oftentimes lead to breakups and divorce.

Sonya Britt, a Kansas State University researcher concluded that “arguments about money [are] by far the top predictor of divorce. It is not children, sex, in-laws, or anything else. It's money–for both men and women." That comes as a surprise to me, but money is so much of a big deal in relationships, that financial infidelity is actually a term used to describe couples who aren't forthright about their finances.

Time reports that 22% of husbands and wives have made purchases they didn't want their partner to know about; 35% of those who hid purchases kept quiet to avoid a lecture, and CreditCards.com conducted a survey that found 1 in 5 couples commit financial infidelity, with 6% of Americans (or 7 million out of 120) have a secret bank account or credit card that their spouse or partner isn't aware of. Out of those surveyed, here's what was found:

That number is heavily skewed toward men, with 26% of males reporting a hidden major purchase compared with only 14% of females. But it's not necessarily because men are more dishonest. A previous study showed they're simply more likely to make large impulse purchases than women, meaning guys may just be a little more freer with funds...a surprisingly high number of men–31%–are okay with their partners dropping more than half a grand without notice. Only 18% of women said the same.

Over the course of 11 years in my relationship, I can easily say disagreements on finances have been the most challenging, with me struggling with student loan debt, garnishment of my work wages and income taxes, to say the very least. Every little dime counts and having to scrape pennies together to make ends meet, while being involved with a man who wasn't the breadwinner, definitely added to an insurmountable level of stress in my home.

Sharon Gilchrest O'Neill, author of A Short Guide to a Happy Marriage, suggests something I wish I would have asked at the very beginning–or at least something my partner should have asked me–in order to ensure we were on the same wavelength when it came to money before life coached us in the right direction.

Crucial Questions To Ask A Potential Partner Before Marriage:

There's even a financial compatibility test you should take to determine if you and your significant other are a money match. Living a financially double life affects both of parties. In an article for The Guardian, one writer accurately states what all couples should be asking before choosing to settle down.

You may need to decide if you can live with your partner's bad habits or not. Living with secrets, however, is another matter altogether...When you decide that you're going to combine your lives, talk openly about what it means to combine your finances.

Don Grant, a financial advisor at Carey, Thomas, Hoover & Breault Investments, goes on to say that he believes “a reason that these problems arise is that for so many years, we are independent and make our own money decisions," making it “hard for many of us to acknowledge that anyone else has a right to a say over that."

I wanted to pick the brains of three women to get their thoughts on how just how important are finances to them, how it affects their personal relationships and financial deal breakers. Check out their thoughts below.

I believe the right time to discuss finances and credit with your significant other is when you two start talking about moving in together, having children or getting married. It's incredibly important for me to know my significant other knows how to effectively manage his money now. But when he and I got together (I was 21, he was 19), I wasn't that smart. I wasn't thinking about anything like that. I was more concerned with who I had the most fun with, who made me laugh, who was good in bed, etc. We have both grown and made money management a priority, but only after suffering and making so many mistakes over the years. If I were single now, I wouldn't get serious with someone who refused to be candid with me about overspending, poor credit, or debt. Communication and growth are just way too important to me and if we can't know honestly where each other is financially, then how are we going to grow together? So, dishonesty and repeated recklessness are financial deal breakers for me. We all make mistakes, but making no effort to grow is a deal breaker. -
I had a bank account; he didn't. We kept a small hat and when he got a paycheck, in the hat it went. When I got mine, same deal. It was always our money. If I needed something, I would let him know and vice versa. We were very open about how much we made and if I found an extra dollar somewhere, it was ours.
I'm not sure how we got to that point, but we were always very open with everything else, so money was just another thing. He was nervous about getting a bank account because it was so easy to click opposed to actually getting the money out of your wallet and handing it over. This method helped us prioritize and I'm a frugal at heart, so I was glad with that decision. I still had my bank account, but we would literally put enough to pay bills once a month and let it rock with a minimum balance until the next cycle of bills.- GG Renee Hill
--------------------------------
Last summer I left my job and we were back to the broke pair. My bank account was nil and the money we did get from his job was just enough for survival–nothing else. It was rough because our relationship suffered. I blamed him for not being man enough to sustain his family; he blamed me for the same. It was hard to see ourselves growing apart, but we understood that money was the issue.
We knew what had to be done, but had no way to fix it. We couldn't have conversations about it because it was that hard not to point the blame. Eventually when I started working again, in December, we had the sit down. I told him we needed our financial life together and I was recently reading articles about it being possible. He told me he just wants to save–saving for us to build our credit and saving for us to create a bed for Ryder. I watched my parents lose a lot without good credit and I barely made it into my apartment because of it and I needed that to change. We're on a road to financial recovery with a method of saving.
What was really important for us to keep in mind was that we needed to be on the same page. It is always a team effort and even when one is making more than the other, it's crucial to remember that teams win- solo acts don't. If we work together, we can learn how to build our finances together.- Stella
-----------------------------------
My husband and I met in college. We were both poor and both eagerly anticipating finishing school, graduate study and beginning our careers. The first few years, money was never discussed and when we moved in together, we realized that we should have been talking about it all along. I lucked out with him because when we began discussing finances, my husband was very knowledgable about credit and mortgages and basic household finances. Since my father was a CPA, I would call on him to give us basic advice about beginning to save and what steps we should be taking as young professionals, but I only asked for advice–I never disclosed details about the money in my home (never do that, keep your business in your house).
However, it was not always easy. Student loan debt, credit card debt from having to have a dream wedding, first job salaries, bills, all make saving extremely difficult, but it makes it easier when you marry a man who can be honest about his finances. We decided to have a joint savings account and separate checking accounts and thus far, money is never a concern because we contribute what we are supposed to and pay bills as a unit. If I could do it all over again, I would have discussed saving and financial goals from day one because not everyone is blessed enough to avoid that conversation and still work out.- Brittany

How do you approach the conversation on credit and what are some of your own financial deal breakers? Weigh in in the comment section below!