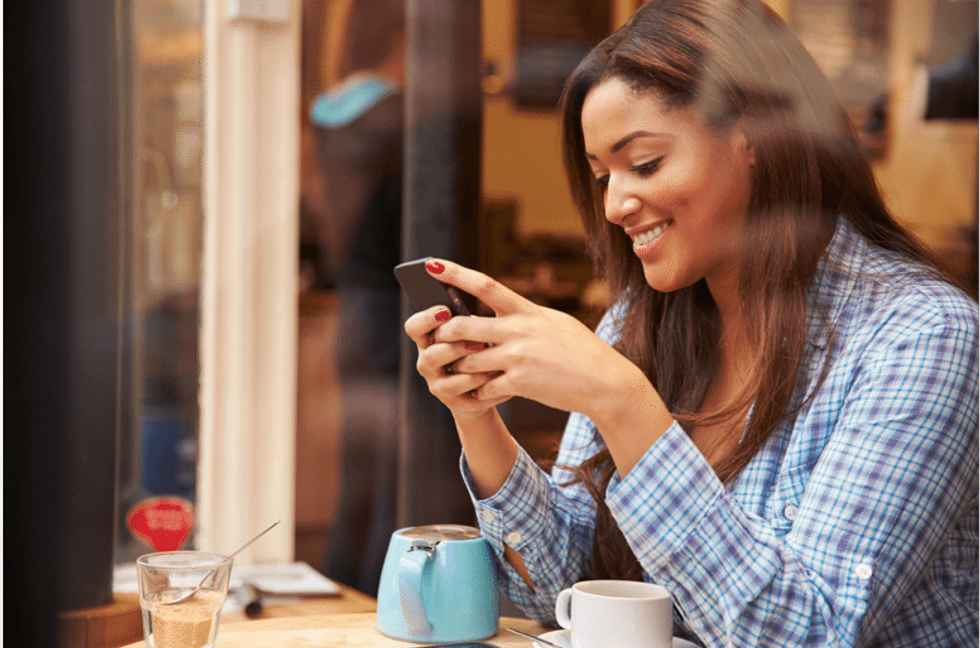 Starting a little over a week ago, we decided that our communication solely had to occur through talking and no texting for a week.

"The only time I actually talk to you is in person," is what I told my husband a few weeks ago when I called to vent about another day of being frustrated at work. His hands were tied up at a job of his own so he tried to rush me off the phone as politely as usual, but I knew he secretly wanted to be like, “Ask yourself this question before calling me: Is this textable?"

Let's be honest, the "phone conversation" is quickly becoming a lost art thanks to the magic of emojis. But is that such a big deal? When I first met my husband I remember staying up until 2 am talking to him about everything from Tyler Perry to fish tacos. Now we exchange "Hmm's" and side-eye emoji's on a daily basis. We both work full-time jobs in addition to a few part-time hustles we both keep on the side in regular rotation. In between working and getting through our first year or of parenthood, I noticed our communication was falling into a pattern of “Did you make it to your work alive?" texts and touching base for the few hours of the day we actually saw each other only to complain about work.

Maybe I am overreacting, but ever since we got married last September I've been fighting any symptom of becoming “that" couple. You know, that stereotypical couple that looks like they have it together but secretly spend every waking moment fantasizing about running away to a tropical island to escape their whiny kids and their borderline, psychotic bosses. I refuse to have our lives be passing moments of bliss filtered from a life of always having to be somewhere or do something and not really living. I figured one of the ways to prevent that from happening is to keep the communication flowing and have actual conversations to check each other's sanity that aren't about work, kids or other adult responsibilities.

In an effort to see how much better (or worse) we communicate when we miss each other with the SMS, I decided to try a little experiment. Starting a little over a week ago, we decided that our communication solely had to occur through talking and no texting for a week. Even if I was just letting my husband know I made it to work, I had to call him. I wanted to see if actually hearing each other's voices improved our communication, or at the very least made us stop and take those few minutes we had to stop what we were doing to really tune into each other and listen.

Usually my husband just rolls his eyes when I tell him we have to alter our lives in some way for one of my writing assignments, so I was surprised when on day one he made a sincere effort when answering the phone and asking, “I almost texted you a picture of the baby. Do pics count? I don't want to mess you up." But after day one ended, I knew not being able to text probably wasn't going to be the big deal I thought it might be.

First let's talk the advantages of texting. We all know it saves on time. Even if it was only a few seconds, the time I spent excusing myself from an office of nosy co-workers to call and let hubby know I made it safely to my destination could have been spared with a five second text. I didn't feel anymore connected hearing his actual voice say, “Have a good day," over a “have a good day" text followed by a smiley face and sunshine emoji. Text-messaging also makes multi-tasking that much easier. It's not like I'm some undergrad strolling the college quad thinking of ways to save the world in between Art History and Business Law. If I'm teaching a class of high school students about HPV or my contractor husband is carrying a water heater up a flight of steps, the last thing we have time for is to answer a call about that crazy co-worker I just caught in another lie.

Texting can be a great bulletin board for conversations you want to have, but may not immediately have time for. Which brings me to my last point: not being able to text made me realize how many conversations I could go without having, not just with my husband but with a lot of people. Not every conversation we engage in has to be some profound discussion on the prevalence of the human spirit, but it made me realize how much time we spend wasting sharing Kermit memes and other social media shenanigans. Don't get wrong, I'm already laughing over what that little African boy will tell that concerned white woman next in a meme, but some of us could probably build a Fortune 500 company in the time we spend sharing, reposting and inviting friends to play Farmville.

So what are some couples missing by only talking through text? One thing I quickly realized is how much talking forces you to listen. We all have that friend who may not text us back until hours later, after we've completely moved on to the next random thought. But remembering what topic you thought was so amazing a few hours ago, requires simply just scrolling down. As my husband and I made a habit of having actual conversations, I realized how constantly being “connected" had screwed up my attention span, and it took much more of an effort to listen to him and follow what he was saying. There were plenty of times when I'd tune in in just enough time to hear, “So what do you think?" and find myself scrambling for an answer that made sense because I was too busy checking the “likes" on my latest Facebook status instead of listening.

The most important thing I learned is that my husband and I didn't have the communication problems I thought we did. The thing is, texting can really be a great alternative to talking, but only when you're with someone you have mastered communicating with in person. My husband isn't a big texter anyway nor is he heavily into social media. It's something I believe has saved us a lot of the drama and negativity that can come with today's digital dating. Because of this I've gotten to know him on level that didn't involve stalking a Facebook profile or harvesting through Instagram history. I know that his common “hmm" responses aren't code for him thinking something I wrote was weird or a complete waste of his time; he just doesn't know what to say. Having built a strong connection based on getting to know each other without the static of Facebook comments or me having overthink the real meaning behind his one word responses has led to a relationship where I'm not constantly over-analyzing everything he does (or doesn't say) and questioning the whole relationship just because he doesn't respond to me after ten minutes.

DM's, instant messages and emojis should never be a substitute for getting to know someone or reconnecting with someone you care about. There are some things that can only be clearly communicated through good old-fashioned conversation complete with revealing body language and awkward moments of silence.

Emojis can only say so much. Whether it's your lips or your fingertips that are doing the talking, the important thing is that you are communicating and doing so clearly, which can only happen when you take the time to get to know someone both on and off-line.

Do you think you can make it through a week of no texting?

Writer, sexual health superhero, and #BlackGirlMagic and #BlackBoy curator regularly featured on @Madamenoire. Toya can usually be found in between her earbuds, listening to trap music and refreshing her browser for concert tickets. Tweet her @thetruetsharee.

What is the difference between bad, average, and great sex? If I ask thirty people this question, I would get thirty different answers. As someone who's had their fair share of both good and not-so-good sex, I understand that there is no one size fits all answer to this question. "Great sex" can mean different things to different people. Case in point, I once had an amazing sexual experience with a guy that a mutual “friend” had a horrible experience with. Great sex is subjective AF! According to the mutual friend his sex was subpar at best. One person’s trash is another one’s treasure. Great sex boils down to what is good for you and your partner at the moment. No two people are the same so no two sexual experiences will be the same either.

When the trailer for The Little Mermaid dropped, everyone finally got to see Halle Bailey as Ariel. Black women and girls raved over the singer/ actress’s beauty as the beloved character while she belted out the Disney classic song “Part of Your World.” And one of the most noticeable things that many fans pointed out was that the character’s red hair was made of locs.

Ari Lennox Talks Therapy And Strained Relationship With Her Father

I Read It, So You Don't Have To: 'The Power Of Vulnerability'