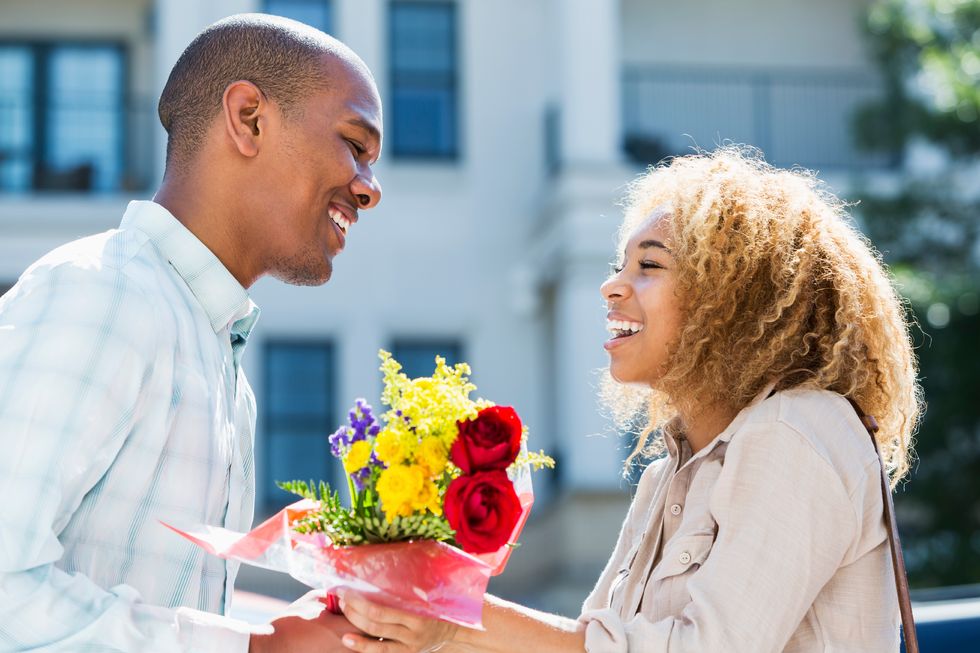 Texting Is Not Courting: 5 Reasons Why Courtship Needs A Rebirth

In this day and time, it's not unreasonable to think that some men have never heard of the term courtship.

Some would even respond, “Date? What's that?"

Unfortunately, that seems to be the reality for so many single women nowadays. Months (years for some) have gone by leaving women to only imagine what it would be like to go on a real datebecause the idea of meeting a guy who understands or believes in courtship almost seems non-existent.

Gone are the days when men would call up a pretty lady, ask her out, take her on a date, open the doors for her, pay for the date and continue putting his best foot forward in an attempt to win her over. In this day and time, it's not unreasonable to think that some men have never heard of the term “courtship" or have a totally different interpretation of it when it comes to dating. Consequently, there are single women who, for the life of them, can't even remember the last time they went on a real date.

They're left to imagine what it would feel like to go on a real date in hopes that someone would ask them out.

Of course we can't discuss this topic without acknowledging that some ladies have in fact made it easier for men, but harder for other women, in that we don't always require as much effort from them when it comes to dating and/or “the chase." Some of us have allowed them to do the bare minimum, so when the next woman requires more within reason, it makes her appear as if she's asking for too much.

You know it's time for a reminder when you see and hear about women who have to initiate everything and ask a man for his phone number, or she has to ask if she can buy him a drink or take him out on a date. That being said, I'd like to challenge the men to really understand a few things as it relates to courting and why it needs a rebirth.

Although the methods were slightly different than today (e.g., hand-written love letters vs. calling vs. texting, etc.), the values and emotional affect still remain the same. Courting may have been coined as an “old-school" term, referring to a man who is proactively pursuing a woman, but it's more than that. Ultimately, it's about getting to know a person and realizing that it could ultimately lead to a more meaningful relationship; it's also the romance of it all.

It's the butterflies in her stomach when a guy first calls to ask her out on a date. It's the excitement of picking out the right outfit for the first date. It's the flowers and candies she receives when he greets her. It's the chivalry she experiences when she's with him that makes her feel appreciated for the woman that she is, and also reminds her of what it feels like to date a real man. It's the fascination of the “chase" and the reality that she's being pursued and not the opposite way around. It's literally the spark that lights and keeps the fire burning between two individuals who are attracted to each other. Courting is like investing in a home; you may have to invest a bit more upfront in order to get and keep something that will last and eventually yield innumerable and priceless benefits.

Texting is not courting.

Contrary to popular belief, texting is not and should not be the single indicator for the status or magnitude of the relationship, nor does it count as real courting. Sometimes, you have to get back to the basics. A text message on Facebook is not a replacement for picking up the phone and calling to ask her out. A poke on Facebook or a “like" on Instagram isn't a clear sign of flirting or the most effective way to show her you're interested. Flower and candy emojis aren't replacements for real-life flowers and candy. Watching a movie at your place shouldn't be a substitute for going to the movie theater, a concert, or a play.

Try to change it up and do something different. Here's a thought, instead of sending a text all of the time, why not give her a hand-written note every now and then? Instead of always going to a restaurant, take her on a picnic in the park or on a boat ride near the city. Nowadays, you can even take her to a couple's painting class.

Whatever you do, do something at the very least.

Yes, it's 2018 and we have a lot of cool new technology and gadgets, but that doesn't mean it should completely take the place of certain traditions or habits.

Some men make excuses and say that courting is lame, shows signs of weakness, or makes it seem like the man is “sprung," but I beg to differ. Real men are unafraid and uninhibited when it comes to pursuing a woman they're truly interested in beyond just the sex and physical attraction. Call it old school or outdated, but real men understand what it takes to get and keep a good woman whether single, dating, or even married. They are confident enough to show a woman how much they're interested and how cool and trendy they can be, while at the same time exhibiting some of the traditional behaviors and values of courting.

Let's be honest. There are some men who would rather lie, play games and mix and mingle with different types of women for the rest of their lives. Then, there are those who would rather date on a more serious level in hopes of finding that special someone. Either way, courting isn't a game and it shouldn't be used as a devious plan or trick just to get a woman in the bed; rather, it's when a man realizes that he's met, or is looking to meet, someone they consider special and worthy of their time, money and/or resources. Hence, for some, it requires a certain level of maturity and certain type of man to do it right.

Some men will even say it's a waste of time because women nowadays don't really want it. “They don't want the 'good guy,'" but that's not true and that's just an excuse. I know way too many women who would say the opposite.

If you avoid wasting your time doing the right thing with the wrong woman, then you won't feel like it's a waste of time.

Besides, don't you want to stand apart from other men and not be known as “that guy" because you act just like everybody else?

Men have to be resourceful and creative when it comes to pleasing that special lady even if that means enlisting the help of a female family member or friend to help give you ideas. Sometimes it's as simple as searching through Google to find ideas. Women love to see men take the initiative and come up with things to do. We love to hear a man say, “I'll be by to pick you up at 8 pm sharp. Be ready." That makes a woman want to get dressed up and look as cute as she can be! While some women actually enjoy doing things for their men and surprising them as well, they also appreciate when the man takes the initiative to pick up the phone to call instead of the woman having to do everything that has traditionally been the guy's responsibility.

Furthermore, women loveto see a man putting in effort. She wants to feel like the man is really interested and really trying to win her over whether he's calling consistently, courting on a regular basis, doing his best to be a good man, and even making time to see and spend time with her. I remember when my husband and I were dating long distance, he made an effort to come and see me every month and sometimes twice a month. Effort goes a long way in a relationship and at the end of the day, that's what it's really all about --putting in effort on both sides.

Anything worth having is worth fighting and working for – including a good woman.

It's time to revive the spirit of courtship! It's time to “man up" and get rid of the excuses. Why? Simply put, because women deserve it. There are way too many beautiful, sophisticated women with wonderful personalities who deserve to know what it feels like to be “wined and dined" and to go on a real date. I don't care if you're young or seasoned, courting never gets old because it's made to last a lifetime.

Shonda Brown White is a bestselling author, blogger, life coach, and brand strategist. When she's not jumping out of a plane or zip lining, she's living the married life with her husband in Atlanta, GA. Connect with her on social @ShondaBWhite and her empowering real talk on her blog.