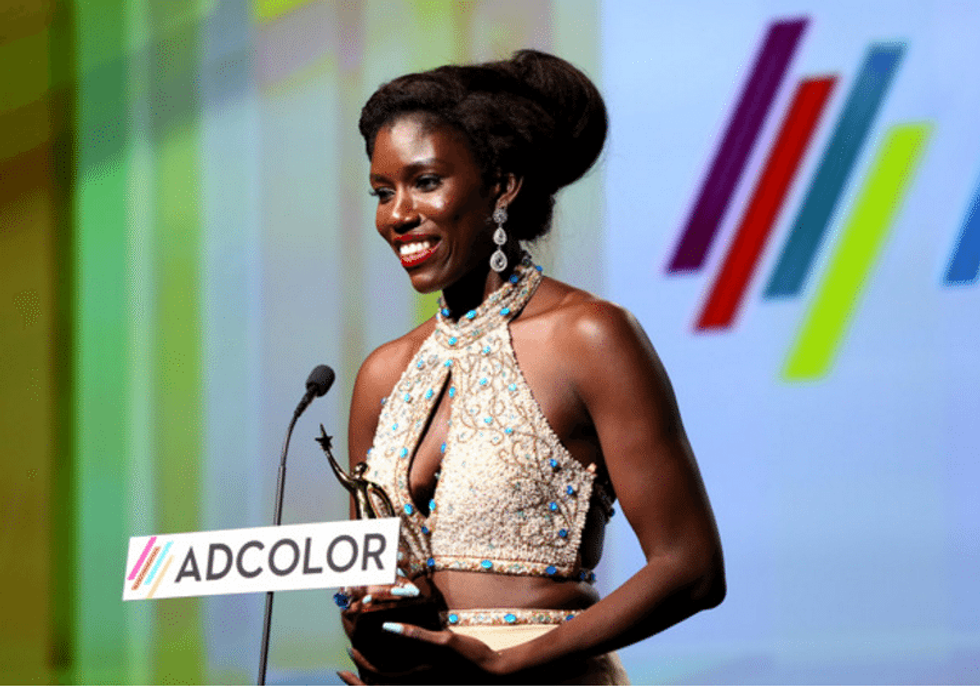 Bozoma Saint John Is A Badass Boss Every Woman Should Know

It only took one conversation with Bozoma Saint John for me to add her to my list of inspiring boss women that are mentors in my head. She radiates wisdom, light, and positivity. Not to mention that she's absolutely hilarious. Within minutes of our call we're already talking about how we're going to find all of the unicorns in the world and form us a unicorn gang. Hashtag and all.

“Unicorns are mythical creatures who aren't like anything else, but the truth of the matter is, there are enough unicorns out there where we could form a gang and we can take over," she explains this with such assurance and enthusiasm I can't help but to get excited, too.

See what I mean? Hilarious.

In case you were wondering, being a unicorn is somewhat of an honor, a blessing will you. It's the term that Bozoma used to describe herself as a child of Ghanian parents who, as a new transplant to Colorado Springs at the age of 14, was different than her peers in every way possible: too tall, too skinny, too black with the kinky hair to match. Too everything as she would say. Instead of being ashamed or trying to conform to the masses, she embraced her differences, proudly donning the braids that represented the beauty of her West African homeland throughout most of her adolescent years.

She may not have known it then, but at the time she was making a statement that would become the mantra she would continue to follow throughout her career: be bold and fearless, never compromise who you are just to please another.

As the former Marketing Director for Apple Music (formerly Beats Music), a position that she held for three years after transitioning from her role as the head of the Music and Entertainment Marketing Group at Pepsi-Cola North America where she helped to secure multi-million dollar endorsement deals with the likes of Nicki Minaj, Kanye West, and Eminem. She was also behind getting Beyoncé to do the half-time performance at Super Bowl XLVII. If that doesn't impress you, maybe being named one of Billboard Magazine's Top Women in Music, Fast Company's 100 Most Creative People, or AdWeek's most exciting personalities in Advertising (which I'll attest to) will have you clamoring to be Boz's bestie.

On this particular Friday afternoon she's managed to slip our call in between meetings. Though she's certainly racked up an inspiring list of credentials, she admits that it wasn't always glitz and glamour for her career; there were many instances where she tried and failed. She specifically remembers a time when, shortly after giving birth to her daughter, she transitioned into the fashion industry—taking on an executive position at a fashion brand, which at the time she perceived to be a great idea given her admirable fashion sense with her own personal style. But she quickly learned that just because you have a love for something, doesn't mean you have to make it your career.

“That was a bad career decision. It was a very noble effort, but I didn't last. I wasn't used to the pace of fashion, I didn't know the business of fashion, and I thought I could just jump in there and do it and I failed miserably. I was out within a year."

But that didn't slow her down from taking risks, after all, without risk there's no reward. And Boz is too fearless not to take a leap of faith.

Even taking the position at Apple Music was her stepping out of her comfort zone, but it's allowed her to integrate her love for storytelling and marry it with business—something that she set out to do even as an English major at Wesleyan University. Her parents wanted her to be a pre-med major, which Boz says is more acceptable in the West African culture of career options (other notable career paths include: engineer, doctor, lawyer, and a “businessman" Boz says), but she had a love for the written word, and was determined to make a business of it.

At Apple she was in charge of crafting authentic messages that were impacting the culture and society. If you've ever caught a Beats commercial, there's no denying that they tell a story so real that it will make you forget that they're even marketing a product. Oh, and the Apple Music commercial that aired during the Emmy's with Mary J. Blige, Kerry Washington, and Taraji P. Henson and directed by Ava Duvernay? Yeah, Boz helped bring that to life too.

It's important for her to not just tell stories, but to tell OUR stories. There's often this expectation for creators and curators in Hollywood to tell the stories that are often overlooked, but it extends beyond the big screens and trickles down to the advertising and marketing executives who are responsible for inspiring people to want more of these narratives. For Boz, being in a position where she can positively impact mainstream's perception of men and women of color is something that she doesn't take lightly.

Speaking of influence, I ask Boz whether she has a lot of women who positively influence her.

There's the work squad who hold her down while she's ripping and running in and out of meetings and events across the country. The squad that she can run to when going through difficult challenges, and who can advise her whenever issues arise. The ones that she can kick back and pop bottles with when celebrating big career and personal achievements. Then there's her home girls whom she turns to when talking everything from guys to her hair falling out.

And, of course, there's her mom.

“Lord knows that woman has some wisdom. She tells me stuff and I'm like 'oh God, I would never,' and two days later I'm like, 'what did you say?'"

I'm debating what squad I can be in, and decide that I'm okay with being a part of the “invisible squad," silently rooting for her as she continues to make waves in an industry where Black women executives are the minority.

Boz is not only wonder woman in the workplace, but also at home as a single mother to her daughter. A couple of years ago she lost her husband of 10 years to cancer, three months before leaving her position at Pepsico and moving to Los Angeles to start her new position at Apple Music. She references this time in her life as one of the points of pressure that have allowed her to become a “rockstar," or diamond if you will. Although it was a devastating loss, Boz hasn't missed a beat, balancing her mommy role with her executive one, sometimes waking up early enough to treat her mini me to a special breakfast, but not chastising herself if she only has time to serve up a bowl of cereal on the way to school.

She also makes sure to take time and show appreciation for herself every day, whether it's a glass of wine or watching a show for an hour instead of answering e-mails. Or splurging on a tube of Flat Out Fabulous MAC lipstick or stylish threads for her many red carpet and event appearances.

Boz says that there's no such thing as balance, but she certainly has shown us that you can have it all—the career, the family, the time for self. As a self-described badass, she's certainly proven that she's worthy of the title.

Perhaps it's something that has taken a lot of trial and error to achieve, and if you ask her, she's still not mastered it yet. She's still taking risks, trying to figure out what works and doesn't work. She's still growing and pushing herself to go to that next level. Still evolving.

“You know it takes a great person to actually evolve. Of course you grow up and change directions, but you know, it's not that easy. You may start off one way and then say you know what, actually I'm going to change it. You know, that takes some big cojones."