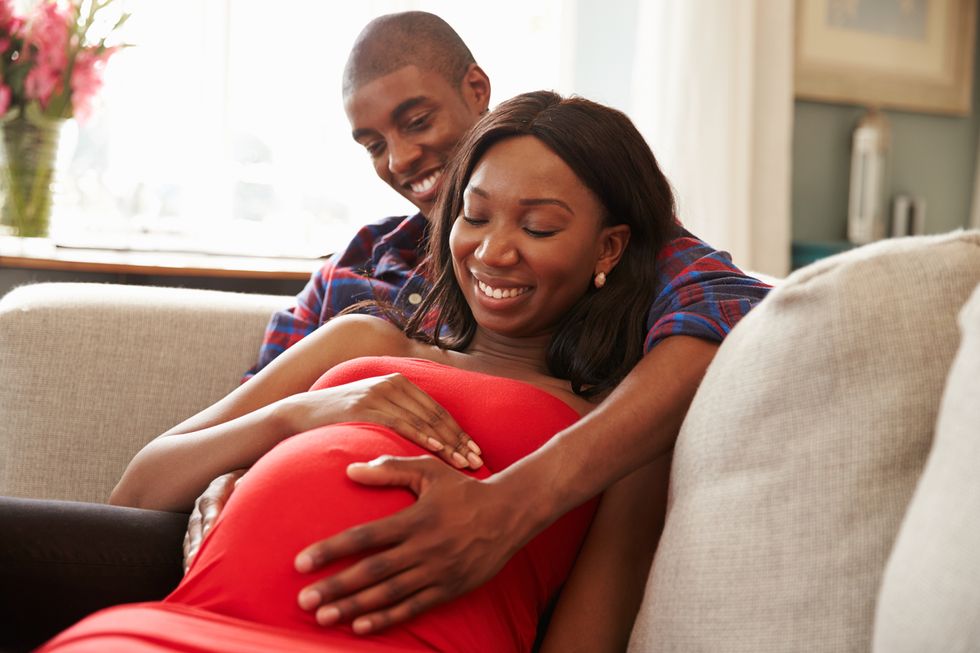 We Gave Up Sex After Having Our First Child

Celibacy after having a baby is definitely not a conventional path, but it is the path my partner and I chose and one that made us better.

There is this order that life is supposed to follow.

I've just never been that cookie-cutter. I tend to be sporadic and off-centered.

I was the type of woman who knew she wanted to be a mom and while dating, I quickly eliminated any guy who didn't fit my vision of what a father should be. When we found each other, we clicked. We vibed. We were also a bit of inseparable. I knew this man would be the father of my child. The question was, when? Would it be before or after the wedding? After the careers, after the courtship? I didn't know but I knew that I wanted it to happen when I felt ready and when I was at a time of my life when I could be the best motherly version of myself.

The one thing that I was most certain about was the fact that in the event that something happened to me, or if our relationship failed, my unborn child would have an amazing father in the man that I chose. I knew that I would have the most amazing parenting partner; one who would never leave me to be a "single parent" no matter if I were married or unmarried, if I was in a relationship with him or not. That was enough for me because I wanted to be a mom. Whether I got to be a wife and a mom would be a bonus but I definitely wanted to be a mom. It was enough for me.

So much so that at age 29, when I began to have strong feelings about wanting to become a mom, we chose not to rush into a marriage. Instead, we decided to plan a pregnancy and we decided to focus on parenting. Even while friends and family deemed my pregnancy a mistake or when people would say I got “knocked up" because they didn't see a ring, I knew that this was very well thought out. Six months of trying to get pregnant and the stress of that “two-week wait".. this was far from a mistake.

I knew that I decided to become a mom at a time in my life when I was ready and I didn't want to wait until someone gave me permission or rush those other areas in my life that I didn't consider ready. We were not ready for marriage. We knew it would come but we were not there yet. We were ready for parenthood and that is the direction we went in. Ass-backwards right? Maybe not, but definitely unconventional.

My son was 4 months old when I turned 30. Parenthood took his dad and I on a ride unlike anything we could have ever imagined but it made us stronger. It brought us closer. We learned so much about each other and we overcame many tests. After focusing on our son for the first year of his life, we were now ready to focus on us. Individually and as a unit. We had many nights of pillow talk about our new life and he spoke to me about how he had become a new man and wanted to be a better leader. I had evolved as well.

Motherhood brought this sense of serenity to my life. In the middle of all the chaos, I feel so much peace. I wanted to learn about this new person I had become. I was so proud of my decision to become a mom. It was the best decision that I had made, it made me better and I wanted to get to know this new me as quickly as possible. For me, that meant tuning in and listening closely. Eliminating distractions and becoming one with my spirituality. I began to meditate more and spend time alone.

For us, that meant getting passed the physical attraction that we had for one another and find ways other than sex to show our affection and adoration. We began to listen more, date more, and laugh more. We chose to be present in each moment we were together and we are falling more deeply in love every day.

Now, after the baby, we are challenging ourselves to remain abstinent until our wedding night and we are so excited about this journey. Sex is so easy when you are into each other but finding alternative ways to show that love takes a deep understanding of self and your partner. You have to be so deep into each other and willing to drown yourself in the overflow of love just to stay near.

What this has taught me is that things don't always work out the way society says it should. Do what feels right. Keep the end goal in mind and switch the middle part up if that makes you happy.

Kimberly Fleming is an author, speaker, and self-proclaimed motivator. Her life's mission is to encourage people to be the best versions of themselves while presently choosing happiness at each stage of their journey. Her work lives on her personal writing stage, graylove.com and on Instagram/Twitter @iam_KIMf.