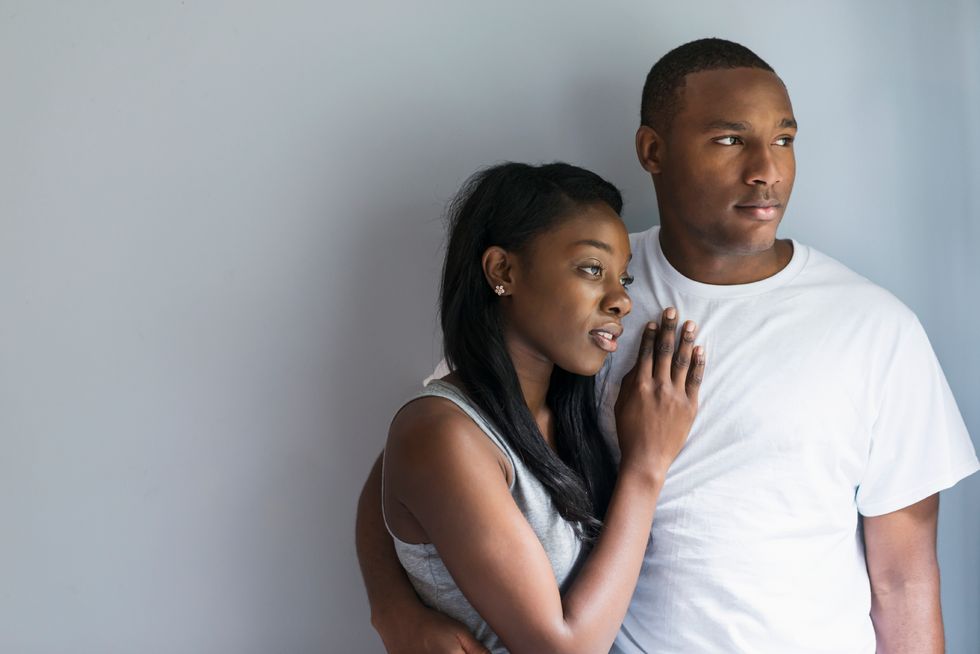 When I Realized I Couldn't Fix His Mental Illness

Loving someone with mental illness is driving through mountain passes at 2:00AM in early spring. Climbing up switchbacks and taking

Climbing up switchbacks and taking hair-pin turns way too quickly and listening to The Beatles' White Album. It's nurturing someone who is running from their demons--holding them on the side of the road while you huddle under a blanket and look at the stars on the edge of a mountain lake, and concurring the darkness and greeting the morning sun while inhaling your victory into burning lungs and gazing into sleepy eyes that radiate relief that the night is over, only to take a new adventure the next night to divert the memories again.

I fell in love with a boy who was officially diagnosed with extreme bipolar disorder, but it took two years to get a diagnosis. We were both 19, young, selfish, and ignorant to the details of mental illness. There were numerous nights when I would get a phone call and the only sound on the other line would be heavy breathing and a shaky, "Help...me." I would instantly jump out of bed and drive to his apartment and find him in a puddle of puke and reeking of alcohol. I would clean him up and put him to bed and pray that he would be "better" in the morning.

I continuously told myself that I could fix him. My touch would erase the dark circles that formed under his eyes from the impossibly long nights that he couldn't sleep. If I held him long enough his anxious, tight, wiry muscles would relax. If we partied and had fun we could be a normal couple like the rest of our friends. We could laugh and drink and be silly, not everything had to be so dark and dramatic. I did not understand that when he was on a manic high that it was not his "normal" self. The extreme happiness would not last and inevitably the other ball of fear and anxiety would swing and the Newton's Cradle that was his personality would slam back down again. The constant swing of emmotion was torturing him. I was in a perpetual state of fear that he would die and I was frustrated because I knew that I was not helping him.

He was constantly self-medicating. He drank... a lot. He cheated on me multiple times. Our relationship was crushing me and I was already working and attending school full time. During the year and a half we were together he ran away more times than I can count, stopping all contact completely. His illness was causing me to have severe anxiety and there were days when I desperately wanted to ignore him, leave him, and forget about him. But then he would call and I would criticize myself for being so selfish. I could never voice my worst fear out loud, especially to him:

He was finally brought to a rehabilitation center where he was first diagnosed with bipolar disorder. The words schizophrenia, manic, and depressed, were tossed around like common cold and a possible ear infection. The smell of bleach and ammonia was such a sterile contradiction to the moldy, dusty appearance of the neglected building. There were cracks on the tiled floor and an eerie silence that trailed behind my reluctant footsteps as I followed a nurse to see him. I walked into a florescent cafeteria and to tell you the truth, I don't remember a single word we said. I know, I'm sorry for the let down, but I honestly can't think of what we said to each other. I remember him being very sedative and his eyes were incredibly sad. I distinctly remember going home and eating some banana cream pie only to expel it into the toilet 15 minutes later. I still can't eat banana cream pie.

Shortly after, I went off to Western Washington University to finish my four year degree. He went through more rehabilitation. We began to drift apart. I went to visit him at one more facility that was much nicer than the last. I didn't know how to tell him that I had found someone else. We weren't together, but I still felt heavy with a guilty heart that I was moving on. I made the incredibly cruel and stupid decision to tell him the day he was sent home that I was dropping out of our relationship. I will never forget the sound of his voice when he whispered in an exhausted tone, "Why would you tell me that today, the day I get to go home?" I selfishly decided that day that I was done; I wanted to leave our relationship in the past. I was bailing hard because I wanted to enjoy my two years of university life.

We have hardly spoken since that final goodbye where we literally hung up the phone and ended the conversation of "us." From our brief interactions following our breakup, and the gossip mill of Facebook, it sounds like he is doing incredibly well for himself. He went back to school and we now share the same alma mater. Without my help or influence he picked himself up and made a new life. In my vanity I thought it was me that was holding him together when ultimately he was always in control of his own life and didn't need me backseat-driving for him. His battle ultimately had to be fought with the aid of professionals and a loving family.

He has a new shotgun partner now. When I think of them driving through life together I feel a surge of emotion that hurls itself through the timeline of "us". I fiercely want her to be the one for him. I want her to stand strong where I crumbled under the weight of his illness. I won't ever get a chance to tell him that I am proud of him. Even though we shared soul-wrenching truths about ourselves, there is the ever present barrier that holds steady when lovers decide to take different directions. After speeding through the dark tunnel of time that was “us" and the discovery of illness, I hope he basks in the light on the other side.

Have you ever dated someone with a mental illness? Share your story below.