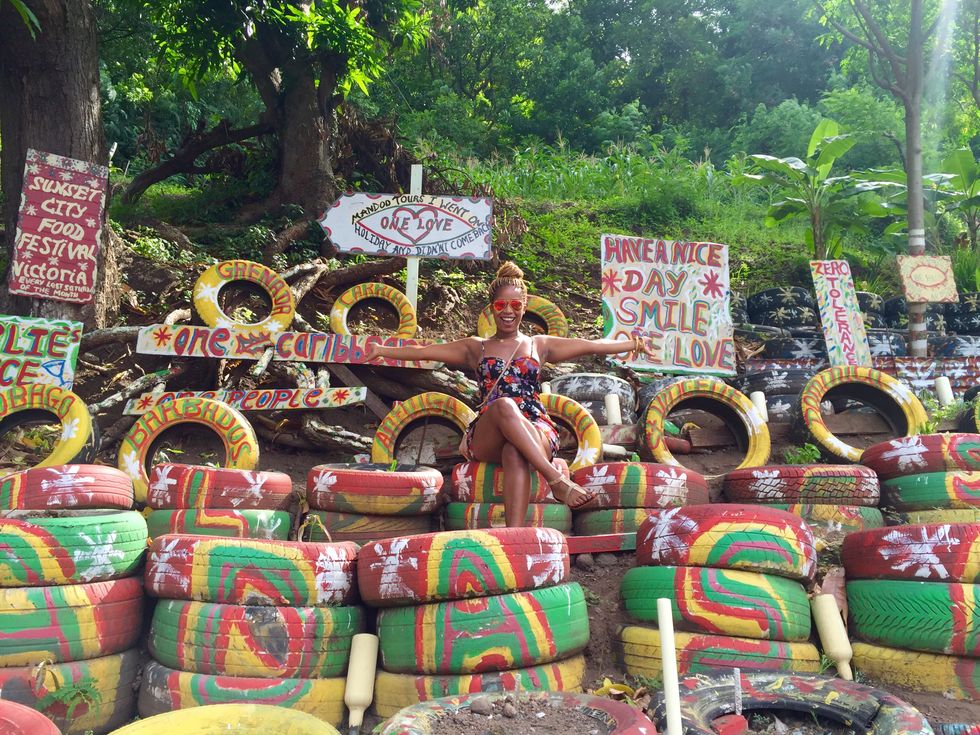 On a Monday afternoon, Christina Rice packs up a little early to head to an impromptu yoga class. She’s the teacher, not the student, with

On a Monday afternoon, Christina Rice packs up a little early to head to an impromptu yoga class. She's the teacher, not the student, with yoga being just one of the ventures that she has her hands in. As an owner of boutique PR and marketing agency LuxeLife Media Inc, and founder of lifestyle and adventure company LuxeLife Adventures, she's proof that when you're your own boss, you can make your own rules and create the life that you want—no permission needed.

In fact, Christina has always been one to not be confined by other's expectations of what her life should be. As a college student at Tennessee State University, she chose hustling over partying, and would spend her weekends in Atlanta to work with an artist management team. And at 21, when most college students were landing their first corporate job, Christina chose entrepreneurship instead. “I had graduated and I was like I don't really want to go into business information systems, I don't really want to work for a company because I had already had that taste of running my own business," she says. “So after three months or four months of figuring out what the next step was, I literally woke up one day and was like I'm going to start a boutique."

With limited knowledge about the fashion industry and running her own retail store, Christina made Barnes and Noble her office for the next eight months, spending eight hours a day researching and learning how to start a business despite what naysayers were saying. “People were saying to me, 'you've never worked in retail and you should get the experience with how to run a store' and I was like no, I believe in myself enough that I can do this. So I did that," says Christina.

With her newfound knowledge and savings from her stint in party planning, the then 21-year-old secured a line of credit to rent the space for her boutique, and also used funds to purchase her initial inventory from a New York trade show. Within a year she had opened the doors to what would be the first of many businesses.

Being her own boss was a dream, but it didn't come without its challenges. Running an inventory-based brick and mortar store with a small staff proved to be more costly than anticipated. “Anytime you open up a business, especially something that's product and inventory based, you want to make sure that you have six to eight months of financing saved up because you're going to learn that as soon as you purchase product and sell you have to replenish it and invest back into the business to help grow that business," she advises.

Christina's lesson in frugality helped keep her business afloat, but after three years of being self-employed she learned another lesson in entrepreneurship—that sometimes change is necessary.

“At some point I just got burned out because I had so much responsibility. I had staff, I had office rent, apartment rent, and I had even bought a condo to rent out as an investment property. I just realized I didn't want to live my life in Nashville, and I was ready for a change."

Christina Rice getting ready to teach a yoga class at Yoga To The People NYC in Manhattan.

Reconnecting with the women who she worked with during her college days, Christina soon found herself packing up and relocating to New Jersey to stay with friends and assist with managing their artist, but after six months money was getting tight. She called up companies that she previously bought inventory from, and soon was working in the Frankie B. showroom. Two weeks in she realized that she didn't have the passion to continue the job, and once again found herself unsure of what her next steps would be.

At the suggestion of her friend, she began looking into public relations. She had all of the right attributes—great communicator, go-getter, and a background in fashion, but what she didn't have was the knowledge about what a publicist really does. “I started reading up on it and I was like okay, I think I can do this. Maybe I can go into fashion PR because at least I have a fashion background."

Browsing the classified ads of Women's Wear Daily—which she refers to as the fashion industry bible—she found three companies to send her resume to, one being a high-end cashmere sweater company. “I did my research and found out everything about them, and I went into the interview just very prepared. And they really liked me and hired me on the spot. Even when I got hired, I was still like I don't know what I'm doing."

Not one to make excuses, Christina became proactive and started developing relationships with stylists and publicists of notable celebrities such as Kimora Lee Simmons, Diddy, and The Olsen Twins, as well as taught herself about writing press releases. With an influx of publicity coming in, the company started growing and at 25, Christina was making a name for herself in the industry with no prior background or experience.

After eight months Christina was ready to take her talents into celebrity PR at the 5W PR agency—it was another area that she wasn't extremely familiar with but felt compelled to try. Over the next couple of years she learned the business, walked red carpets, organized large album release parties, and continued to build relationships that would later become vital when she would venture out on her own. By 2008, she had made another job change, this time becoming the Director of PR for clothing brand Akademiks. Being on the corporate side of PR offered her a new perspective of the business, but it also came with a new pair of bosses that clashed with her personality and made it difficult to enjoy the position that she once loved. After two years she once again started looking to transitioning into another role. “At some point I was just like it's time for me to go. I don't know what my next step is going to be, but I can't be here much longer because I clashed with the two [new] executives so bad and I just didn't care at the time. I was like I need to finish this project and then I need to go because I'm very unhappy."

The project was to launch a major event at the Hard Rock Hotel in Las Vegas, which Christina hoped would be her last hoorah before turning in her resignation letter. But before she could go out with a bang, the company decided to let her go.

“I didn't know what I was going to do, I just knew I wasn't going to work for another company. I had gotten to a great place in my career to where I could strike out on my own. With PR, [people] wake up and they're like I'm a publicist, and you have no relationships or no formal training. Not saying you have to go to school, but working in an agency for me—as far as PR—I needed the relationships with record labels and I needed the relationships with editors. I needed that to be able to get good results for my clients, and over the years that's what my focus was."

Christina had built up a nice rolodex of contacts from her years working in the industry and freelancing, and within two months she had officially turned her side hustle into a full time gig under the moniker LuxeLife Media—a full service PR and marketing agency serving both celebrity, media and corporate clients alike.

For the next six years business was booming as Christina continued to build an impressive list of clientele. Days were spent meeting with clients, chatting with friends over cocktails, and working a job that she loved—all on her own terms. But something was still missing. Her weeks began to turn into a repetitive cycle where the lines between work and play were blurred, and she was doing little to satisfy her thirst for new experiences. One day, she took to social media to discuss her interest in indoor rock climbing and found that there were a handful of people equally lusting for life. She put together the details of the outing, and when 20 people showed up, it sparked yet another idea for the serial entrepreneur—a company centered on creating memorable moments.

Though the idea came to her around the same time as starting LuxeLife Media, it wasn't until the end of 2014 that she was able to make LuxeLife Adventures official. Throughout 2015 she traveled across the world, putting together itineraries with one-of-a-kind experiences that not even a camera phone could capture. “We want your experience to be like what the local does, not just what you see when you Google the top things to do. What are some of those hidden places or the beach where locals go? Or the hole in the wall restaurant that serves the best food in Colombia? I think people miss that because they're going to all of the cool places and I'm just going to take my photo and that's going to be the trip when it could be so much more. You spend a lot of money, so you might as well get more out of it than just cool photos."

For Christina, not being afraid of change has afforded her a life that she's proud to say she doesn't regret.

“I think you have to follow your heart," she says. “You have to really be in tuned with what makes you happy. And of course making a very smart decision, financially and things like that, but also having confidence in yourself that you're going to land on your feet is what's really important. I talk to quite a few women who are afraid to make that leap, and I tell them if you want to start your own business or you want to change careers or whatever the case may be, you're only going to get out of it what you put in."

Whether she's launching her own PR agency, helping others to get the most out of life through unique experiences, or simply teaching a yoga class for some much-needed stress relief, Christina proves that the root of fulfillment begins with fearlessness—and sometimes that means betting on yourself.

All images courtesy of Christina Rice