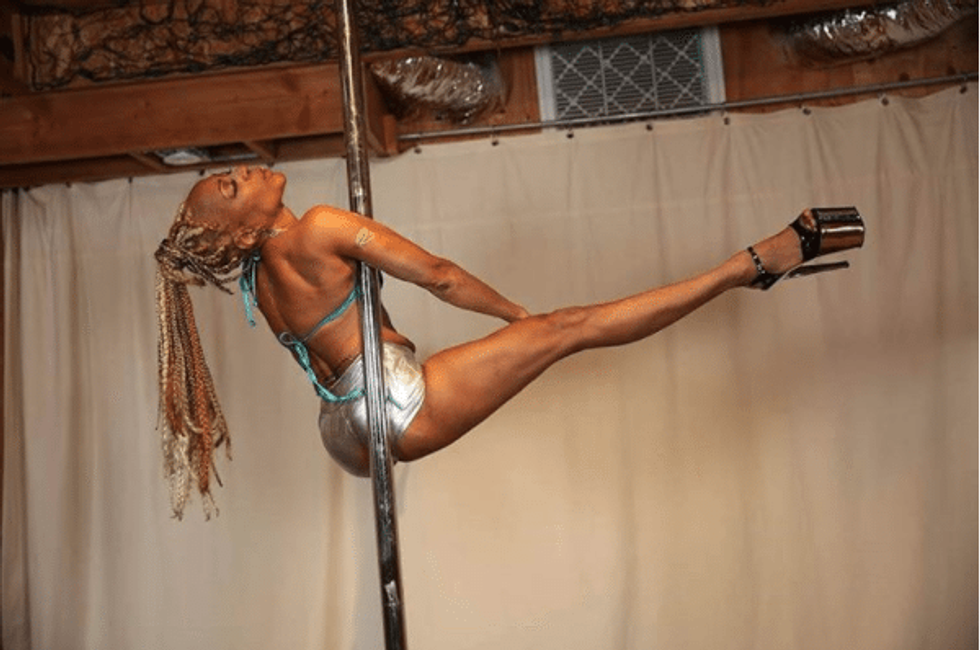 Again and again. The real estate market crashed, causing her to lose dozens of properties in the process. Due to financial setbacks, she had to file for bankruptcy. The IRS came knockin' and she was audited. Shortly after, her home was foreclosed and her car was repossessed. Her man wasn't man enough for her, and left her for good. She had to give up her dog, too. As her life turned completely upside down, Makeda found herself suffering through more losses than she thought she had the strength to bear.

Again and again. Loss after loss.

While others might have crumbled, never having fully realized the power of their strength, under this tremendous pressure, this woman was determined to rise up not only the ladder of success, but also the pole of success. In fact, it was the pole that ultimately led her up the proverbial ladder.

While enjoying some much needed reflection time, Makeda found herself strolling on the streets of Hollywood and Vine one day. She wasn't certain of what she was looking for, but she definitely found it. A lively 74-year-old woman provided the match to ignite the spark within her. The elderly woman went by the name Magda, but what intrigued Makeda about this lady was that there was nothing elderly about her at all. The woman was lively, known for taking pictures and performing limber splits. It was like nothing Makeda had ever seen. Magda was youthful despite what her age would suggest. Makeda looked at her in awe and wondered what was the secret to her eternal youth.

In her forties, Makeda began to attempt to tap into the “fountain" and acquire some of that youthfulness displayed by Magda by taking some yoga classes. “I was inspired to take a yoga class and did, but it didn't excite me. Soon after, I saw a deal on LivingSocial for pole dancing," Makeda shares. “I figured, 'What the heck!' So, I signed up. [I took] one class and I was hooked!"

As a successful publicist for more than 25 years, and working with well-known entertainers that include Mo'Nique, Jamie Foxx, and former Tonight Show band leader Kevin Eubanks, it wasn't too far fetched that the 55-year-old Makeda strutted her stuff into the world of entertainment – but she was not sure how others would react. Especially since pole dancing can be a bit taboo for some people, despite its mental and physical health benefits.

When Makeda first started, she was very conflicted about her choice to participate in pole dancing and sharing that hobby with her friends. “One part of my mind kept telling me I was too old and just crazy to be starting this regimen at my age," she reminisces. “But there are so many women pole dancing now over 40, over 50, and even over 60-- you would be amazed."

For some, pole dancing is how they make their money (stripping, go-go dancing), for others it has become a way to get in shape and live a healthy and happy life. Makeda definitely falls more into the category of the latter. Although Makeda Smith has made it rain in the club a time or two, it is purely something she does as a hobby, she doesn't undress, and she has not quit her day job!

“My first performance was in a bikini bar, Cheetahs, in Hollywood," she shares. “It was an Amateur Pole Night, specifically for pole dance students and amateur performers."

As she laced up her 8-inch heels, Makeda couldn't help but get the jitters. Though she was so confident about her body and her moves, fear has a way of creeping in wherever there's uncertainty. “I was a little nervous, but once I hit the stage, I was ready to entertain," Makeda remembers. “The fun part about the Amateur Pole Night is you get to invite your friends to come out and 'make it rain.' The place was packed and I felt amazing."

For Makeda, hanging upside down on a pole enhances her superwoman abilities. “It is more than exercising for me," she declares. “It is total rejuvenation of the mind, body, and soul. It pushes me to limits I never dreamed of and the effects of physically doing what may seem impossible."

Although pole dancing assisted in anchoring her life and getting back her mojo, in July 2016, Makeda went viral for her skills – but not in a good way. She became a victim of cyberbullying, ageism, and body-shaming by commenters on websites like Worldstar and Baller Alert. Even comedian Earthquake got in on the humor when he asked, “Whose Granny is this???"

“I was totally exhausted after three consecutive dance classes," she explains about the video that made millions of people click and tap into the hype, “I also felt very sad with all the news of the week. People were being murdered by police and police were being murdered, and I felt compelled to dance it out because that is what dancers do."

While many might have hung up their heels and headed back to their usually scheduled agenda in light of controversy, Makeda simply shrugged her shoulders and stated, “I wasn't fazed."

She is now affectionately known by some as a #polepriestess and she has laughingly accepted the hashtag #grannyonapole.

But don't get it twisted, not all of the comments were cruel. She has also gained a lot of new watchers that radiate and outpour positivity and support of her acts of self-love and empowerment. “I don't have all haters, now!" Makeda laughs. “The admiration from men is really a wonderful ego boost as well."

Yes, this #grannyonapole is flexing her skills!

And her love life?

“For the last several years I have not had a sex life, at all. Period," she claims. “Pole dancing kept me in touch and in tune with my sexuality. Dressing up and going to class, wearing high heels, and dancing to great music is a terrific adrenaline boost. I would say that pole dancing promotes self-love!"

Because love makes the world go round, Makeda says that she has recently gotten back into the “swing of things" now that she is dating a new guy. “All my exercising and poling is finally paying off," she says blushing from ear-to-ear. “Pole dancing definitely increases your libido, stamina, and flexibility."

So, if you're thinking of clicking your heels in the air, here are a few tips from the sexy granny that will get you ready to reach the height of that pole:

Do you think that there is an age cap for pole dancing? Have you been inspired to pole dance too? Drop your comments below.