Is my hard work and time only worth 79% of yours? 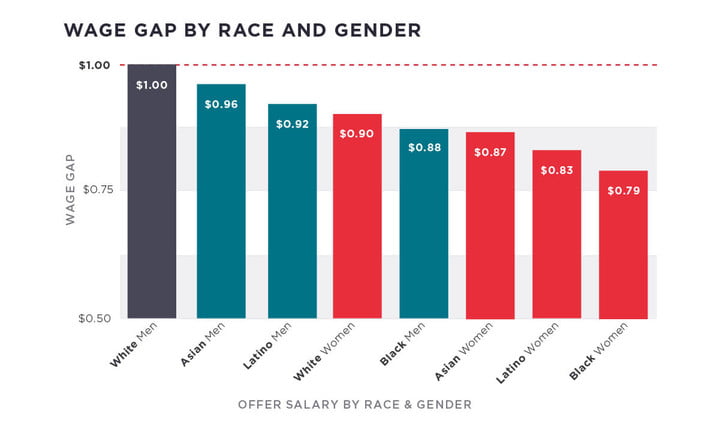 This is the question that has ascended to the forefront of the American workforce conundrum in regards to the continued pay inequality based on race and gender. While this isn't a new phenomenon, the discussion has been given an added boost thanks to the Time's Up movement.

Organized by a group of over 300 women in Hollywood, Time's Up's goal is to "create concrete change, leading to safety and equality in the workplace." And while this list comprises of women who are, for all intents and purposes, doing better financially than the average American woman, the rest of us can hope that their efforts will trickle down to every working woman.

However, actress Thandie Newton has also taken charge despite being "left out" of this movement. Though she has spent many years speaking out about the sexual assault she has experienced at the hands of a casting director, she also says she wasn't deemed "hot enough" to be included on the list. Instead of backing down, the Westworld star continued to use her platform to speak out against inequality and sexual violence in the workplace and most recently discussed her surprise at the glaring differences in her paycheck.

This week, Newton, 45, told a crowd at Cannes Lions, "When I first discovered how much they were offering, it made me realize, 'Oh, my god, men have been paid so much more.'" And while it was recently revealed that HBO now offers pay parity for both and male and female leads, Newton recognizes that this effort might not have been possible if it weren't for the Time's Up movement.

The Solo: A Star Wars Story star also notes that she even has to remind herself that she is actually worth it.

"Every year, I go into a new production or a new season of 'Westworld,' and I didn't even think to ask for more because I just feel so grateful to be working. But we need to expect more for ourselves."

Sometimes we downplay our own talents to our detriment. Earlier this year, she told Vanity Fairabout the pay negotiations that were going on for the third season of Westworld:

"They're all happening right now, and yeah, we're all equal across the board. It's really exciting. It's unprecedented. It's—goodness; it shatters so much calcified pain, resentment, frustration. It just shatters it."

There, she also expressed her unwillingness to ever accept a role that didn't at the very minimum offer her what an actor was being paid:

"I wouldn't do anything if it didn't. Definitely not. Fuck that. It literally sets a precedent, and [HBO is] leading the way, which is amazing."

One thing Newton and the Time's Up movement has shown the world is how unfair these practices have been and how long these issues have persisted. Her TED Talk on diversity in and embracing your "otherness" has been viewed 2.6 million times, so she is helping to pressure Hollywood into changing their unfair practices. She also told the Cannes crowd:

"HBO, to a degree, they were pressured into it. But we need pressure, we need to disrupt. It is not [a] wicked thing to do, it's part of change and growth. It's another word for encouragement. So that pressure has worked."

And while many of us outside of Hollywood are still waiting on this pay parity, so many more of us are going above and beyond the average on the daily. It's definitely time for all of us to receive equal pay for equal work, period. Thandie reminds us of that mission.

Michelle Schmitz is a writer and editor based in Washington, DC originally from Ft Lauderdale, FL. A self-described ambivert, you can find her figuring out ways to read more than her monthly limit of The New York Times, attending concerts, and being a badass, multi-tasking supermom. She also runs her own blog MichelleSasha.com. Keep up with her latest moves on IG: @michellesashawrites and Twitter: @michellesashas