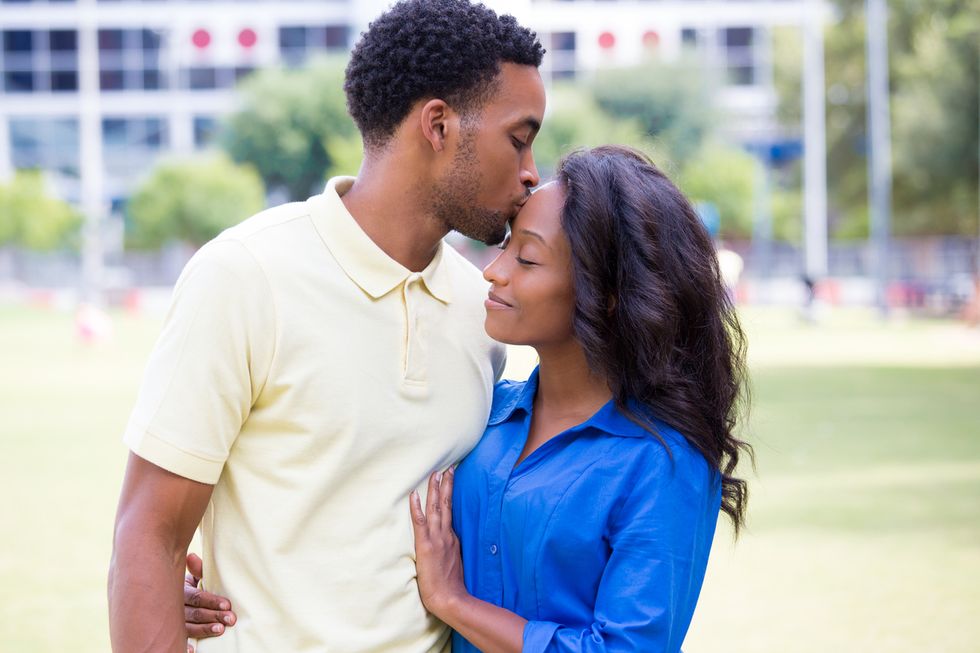 It was four years after we began dating. I gave him 30 days to leave.

We shared a two-bedroom apartment together with our two dogs and had unofficially but mutually agreed to share our lives together. Only, I was unhappy.

My unhappiness began to grow into resentment. Like every couple, we had been through our share of ups and downs and had plenty of arguments and bruised egos to show for it. This time was different and my decision to leave was sporadic – almost as if I had woke up one morning and my inner conscience said, "Kim, today you have to take control of your life."

That was the day I walked my dog to the leasing office and handed over a 30-Day Notice to Vacate. I cried to my sister near the same oak tree that he and I carved our names when we moved there. I wiped my tears as my sister said, "Rest in your decision Kimberly, be sad, but don't stay there... Pick yourself up and move forward."

My dog and I walked back to my apartment with dry eyes and a sense of peace that didn't exist in a relationship where I constantly ignored my wants and needs to please the man I was with. Prior to that day, I was in a relationship where the things that made me happy were mocked and ridiculed. "Why should I take you on a date? No man really wants to go on a date," he would say. "Why do you want to celebrate your birthday? You are near 30, grow up," he laughed.

He never kissed me and blamed it on his lack of affection from his mother, but I needed to be kissed. He never told me that he loved me and said that I should know that, but I needed to hear it. It always saddened me to hear my desires mocked. I truly liked the idea of dating the man that I loved for the rest of my life. I truly loved my birthdays even if I was closing in on 30. I loved to be kissed and I needed affirmations. I was good at voicing my wants, but I wasn't so good at moving towards them. Instead, I began to convince myself that they weren't a big deal. "At least I have man that doesn't cheat," or "He loves me, so I can do without those things."

I remember being sad at every family function or social event when I was always seen as the "single" girl even though I was in a relationship. I was too ashamed to tell my family and friends that my man refused to come out with me so I covered for him and, in turn, buried my true feelings under the perception of perfection.

I look back and I see that hurt and infidelity in past relationships triggered my desire to hold on to Mr. Good Enough in fear of subjecting myself to that same hurt and loneliness. He isn't right for me, but he is better than them.

But one day I realized that just because Mr. Right Now isn't as bad as the guys before him does not mean he isn't bad. He didn't cheat on me or curse me out like those other guys, but at the same time, he was not delivering love and affection to me in a way that I could recognize it. He failed at all of the things that I considered necessary in a relationship with a life partner. I decided that I didn't want to waste another second unhappy in this relationship and I convinced myself that the end result would be: one, him evolving enough to open his heart to fulfill my needs or, two, I would find someone else that would be more than happy to have me. I would be happy either way.

Two hours after the submission of my notice to vacate, he came home and I told him, "You have 30 days to pack your things and find another place to live. I love you but I've decided to love me more. You've made it very clear that you are happy with the way things are in the relationship. I've been feeling like a single woman with a roommate and, for me, that is not love. So... you have 30 days before the lease is up and my things will be gone by the end of the week."

I moved into a one bedroom apartment with one of the dogs. I found a new job so that I could cover my solo bills. I bought a car and for a while, I endured and ignored his anger voicemails and texts until he eventually stopped calling. Though they hurt and I missed him, I shifted my focus from him to me and began to reconnect with the things that I loved. Family. Friends. Fitness. Fun. I began to meditate and reconnect with my spirituality. I had even opened myself to the idea of starting to date. It was the happiest I had been a very long time. I was alone but not once did I feel lonely.

I hadn't spoken to him. I needed to completely disassociate myself from him in order to focus on me. I wanted him and me to grow separately. I knew that when the right time presented itself, I would reconnect with him and his growth (or lack of growth) would become apparent and my newfound inner strength would move me toward (or away from) him.

When the phone calls began to fall off, my desire to reach out to him increased, and I could feel the anger and resentment leave me, but I still kept my distance. Previously, I had always been the fixer of the relationship, the one to initiate conversation or brush off disappointment in an effort to avoid an argument. I knew that if change was going to happen it needed to be as a result of his pursuit of me.

I was always in control of the relationship and this time I wanted to relinquish all control.

When he did call, my voicemail greeted him graciously. If he wrote, my reply was brief and amiable. He even appeared at my home wanting to enter, I declined tactfully. The message I wanted him to receive is I don't hate you, there is no anger, and I wish you a world of happiness, but please allow me space to move on. Silence is so powerful.

Being pleasant paired with that silence is even more powerful but this was no plot to play a game, I simply had no words for him and I was too emotionally connected to him to hold strong to the non-negotiables that I had set for myself so I could not let him in my space. But I knew that one day the words would come and I would have the strength to speak with no remorse or regret.

And, that one day came.

11 months, 47 voicemails, and about 100 missed calls later, I decided to take his call. The very first thing he said to me was, "Will you allow me to take you to dinner?"

That was the start of something new but this wasn't the man I knew. I went to that dinner with an open heart and open ears. I remember looking at him and seeing the man that I fell in love with and if the tears that I held back had a voice, they would scream, “How did we get here?"

That night he talked. I listened. I smiled. He kissed me. He said to me, "I didn't know how to show you love. It made me uncomfortable to be vulnerable. When you left you took a piece of me with you and I can't imagine a life without you."

I exhaled and he continued, “I'm not perfect. I've never been in a relationship this deep but I do know that I want to be the man that you want me to be and over the past few months, I've figured out how to love myself and control my anger so that I can give you the love that you need. All I need is a little help."

That was all I needed to hear.

A desire to do better was a compromise that I was willing to accept. We committed to frequent date nights. We signed up for couple's therapy. We began to pray together. We listened to personal development podcasts together and read books at night. For nearly 16 months, we completely eliminated sex from our relationship.

This was the first time that I realized that growth and personal development have to be intentional. People mistakenly assume that it will just come to you with time but it needs to be a deliberate action.

We were students of each other, willing to communicate and adapt for one another. Even our arguments were different. Before the breakup, he had a bad habit of dismissing my feelings and I had a bad habit of withdrawing or walking away during confrontation, but now he practiced empathy and I vowed to stay through resolution.

Those first months after we rekindled were followed by months of conscious effort to learn one another and he began to deliver love in a way that I could recognize it. He frequently kissed me, touched my face, held my hands, and affirmed his love for me. He was present.

The next 36 months were blissful. There were still ups and downs, but the ride was much smoother with both of us balancing and guiding each other. This time I didn't feel like I was in it alone.

I can honestly say that I learned more about him and him about me during the first year after we rekindled than the first 4 years prior to the breakup.

A relationship of any kind requires one to pour out and into another person, like a vessel of water into a bed of flowers to help it grow. That vessel will eventually become empty if it is not consistently refilled. I was that vessel that had become empty with nothing left to give.

He finally began to pour back into me the love and adoration that I had been pouring into him.

We were finally together.

Two broken people found a way to stand strong on their own and became whole individually, which led to a healthier, happier union. Today, we are proud parents of a one year old baby boy and happy in a balanced relationship where we both strive to serve each other.

...All because I shifted my focus to that which made me happy and had the strength to walk away.

Kimberly Fleming is an author, speaker, and self-proclaimed motivator. Her life's mission is to encourage people to be the best versions of themselves while presently choosing happiness at each stage of their journey. Her work lives on her personal writing stage, graylove.com and on Instagram/Twitter @iam_KIMf.

xoNecole is always looking for new voices and empowering stories to add to our platform. If you have an interesting story or personal essay that you'd love to share, we'd love to hear from you. Contact us at submissons@xonecole.com