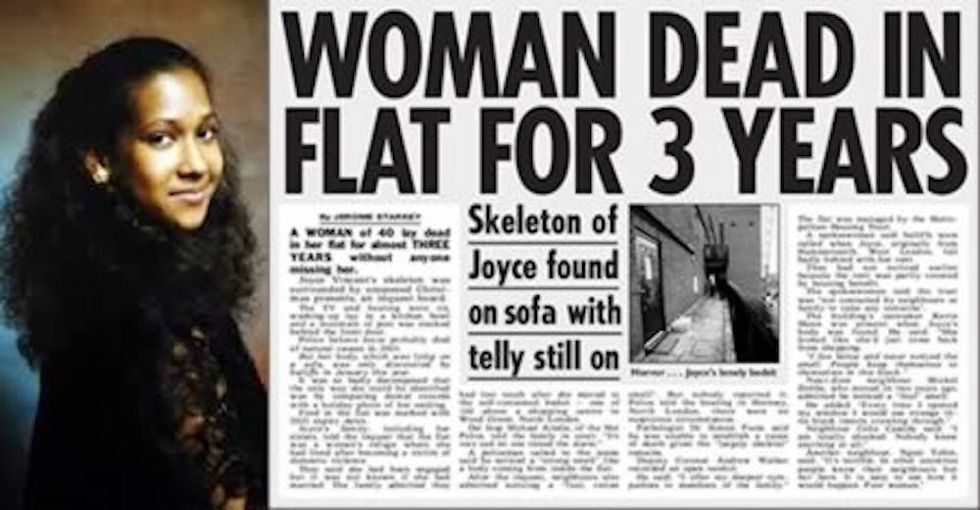 When You Are Dying And No One Notices: What We Can Learn From The Joyce Vincent Story

I cannot fathom dying alone with nobody even picking up the phone to check on me.

I cannot fathom dying alone with nobody even picking up the phone to check on me.

Imagine sitting in your living room one evening, wrapping some last minute Christmas gifts, when for some reason or another you take your last breath. Nobody around to witness it, nobody in your life who even cares. Even worse, to sit there for three years as your body slowly decays, the static that once crackled on your television dying along with you.

I'm sure many of us cannot imagine such extreme circumstances, but that is exactly what happened to Joyce Vincent in 2003. She was a beautiful young Caribbean woman from North London whom many confessed to being someone who everybody loved--just not enough to make sure that she was still alive and well. This real-life tragedy was recently depicted on an episode of Being Mary Jane, and the story is so heartbreaking that even portraying it on a TV show couldn't mask the emotional impact of what it must be like to die alone.

To date, no one knows what caused the death of the 38-year-old woman who by many accounts seemed to be living “the life," but more disturbing is the fact that her death wasn't realized until three years later during an eviction. It's a mystery that filmmaker Carol Morley set out to explore in her new documentary Dreams of Life, which debuted this past October at the BFI Film Festival in London and has garnered nomination buzz for best documentary.

While researching the mysterious events following Joyce's death, Carol Morley initially had a difficult time finding anyone who even knew the young woman. The ones who did--the family members of the deceased who attended her funeral--would not respond to Morley's inquiries. Finally after some time, past friends and associates began to reach out to share their memories of the woman they saw as a beautifully talented, sociable and intelligent woman who they thought had it all together. By many accounts Joyce was popular, lovable, and charismatic. She was a singer, whose gift led her to meet celebrities such as Quincy Jones, Stevie Wonder, and even Nelson Mandela.

So what happened within the life of this budding singer/socialite that forced her to withdraw from the public, resulting in her death going unnoticed for so many years? While many people focus on how a seemingly healthy young woman died suddenly, I believe many don't consider the possibility that she died of loneliness--something that many people quietly suffer from every day.

The signs are sometimes there, but we're too busy to see them. Here are three things I personally took away from Joyce's story on what to look out for before those I cherish drift away.

Just Because They Smile Doesn't Mean They're Happy

I'm acquainted with so many young women who insist that they're so independent and they don't need anyone in their lives, so they focus on work and never make time for anything else. I know women who have given up on love due to past heartbreaks, and given up on friends because they're unable to trust others. Is this what happened to Joyce? Did she give up on building new relationships with others due to past hurts, and eventually waste away in her loneliness?

I'm sure many of us have heard the saying “smiling on the outside, crying on the inside." The truth is, this world and everything that comes with it can be depressing. There have been plenty of times that I've kept my emotions inside, pretending like everything was okay, when inside I was breaking down. Mental illness, specifically depression, is a disease that more and more people are being diagnosed with, but many are not being treated for. Depression is often linked to anti-social behavior, and total withdrawal from others. I've been at the point in my life where I was so consumed by my own issues that I withdrew from my loved ones in order to “spare them" the ordeal of having to deal with my problems. I've since learned this is not the way to go. Everyone needs some sort of human interaction (outside of work).

I was taught in my youth to show kindness to others, especially those who may be singled out and made fun of. You never know what someone else is going through, and just the simplest gesture of kindness to someone you may not know well or at all, to let them know you're interested in them and that you care, can make a big difference.

In a world consumed by digital media, we a as a society seem more likely to type hello to strangers online rather than say hello to the strangers we pass on the street everyday. Taking the time to notice someone who may not have been told hello in years can make a huge impact in their life. A lot of the time we tend to judge others who seem to keep to themselves, assuming they're strange or something is wrong with them. Why not join that quiet person who always sits alone at lunch and start a conversation? Maybe they won't engage, and that's fine because the effort was made, but what if they do engage and what if you make a new friend? No one should die alone, and that is exactly why the story of Joyce Vincent continues to haunt me.

Let Your Loved Ones Know You Care

One thing I've learned not to do is a hold a grudge. There isn't much my loved ones can to do to me to force me to never speak to them, and I make a conscious effort to never hold grudges.

A few years back, I almost lost my mother to symptoms of MS, and from that day forward I vowed to never let petty things get in the way of showing my love and appreciation for those I care about. I couldn't imagine any one I loved leaving this earth unsure of how I feel about them. I also do my best to not distance myself from others.

So often I find myself consumed by work and my immediate family, that I often neglect my loved ones who I don't see everyday. A few years ago, my grandfather died suddenly from cancer. Prior to him being hospitalized, he was having a hard time getting around to run errands and do everyday things like laundry and shopping. At this point in time, we thought he simply had a bad cold. Being his oldest granddaughter, I was the one he called for assistance a lot. There were times where I became overwhelmed with running errands for him as well as my disabled mother, and managing my own family. I did it, however, without complaint, and I am so glad I did.

Sometimes I question whether I could've done more, or if he thought he was bothering me before he passed away, but the truth is, though it was difficult I did it without complaint, and with a smile, and I have no doubt in my mind that he knew I loved him when he departed this earth.

The tragic end to Joyce Vincent has caused me to wonder how many people I know or have encountered who are just like her; who may die a death that no one will notice. I've personally decided to make a conscious effort to be kinder to others, specifically to those I don't know. Whether it's a casual compliment on someone's outfit, or a smile and hello, it's the little things that make people feel noticed and part of a world that many of us can get lost in.

I pray that Joyce Vincent is now at peace.

What do you do to show others that you care?