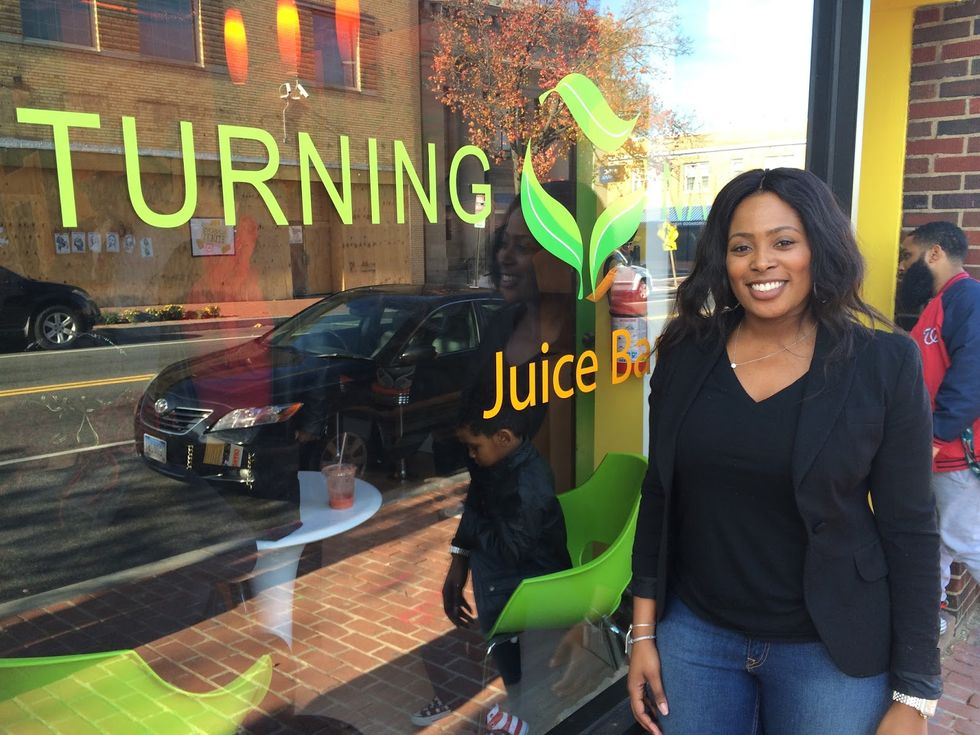 After Losing Her Mom To Cancer, This Woman Quit Her Job And Opened A Juice Bar

Oftentimes it's life's wake-up calls that lead you to your purpose.

Losing a job, hitting financial hard times, or even encountering a health scare can unexpectedly lead you from a moment of tragedy to a lifetime of triumph.

For Jerri Evans, founder and owner of Turning Natural juice shops, it was her mother's diagnosis of breast cancer that lead her to a lifestyle that would not only impact her family, but the thousands of customers who filter into her stores daily.

I first learned about Jerri after she supplied an array of her signature juices at a Toyota Green Initiative VIP dinner during the Broccoli Festival in Washington, DC. After hearing a snippet of her story, I knew I wanted to learn more.

I caught up with Jerri via phone on an early Friday afternoon as she navigated from one of three stores in southeast Washington, DC to the other just fifteen minutes away. “The free time I do get is driving from store-to-store," she admitted to me, hinting at her hectic schedule that often accompanies being an entrepreneur. Not that she's complaining, though. Because when you're in a position of service the reward comes not with the amount of sleep you get, but in the amount of lives you change.

As the closest sister to her mom, Jerri's mother took note of the lack of improvements that came with watching her sister go through chemotherapy and other unsuccessful treatments. When she was diagnosed with her own bout of breast cancer, she chose another route to her healing. “She took a holistic and alternative approach to it mostly because she saw how things didn't work for my aunt, and how chemotherapy and all of the different treatments that they were shoving down people's throat to those who had cancer just really wasn't the best option."

Growing up in Southeast D.C. the idea of healthy eating was unprecedented. Though her mom made sure her and her brother always ate something green, she counteracted the “healthy" with the typical diet of a community flanked by liquor stores and carry-out shops—chicken with mambo sauce, honey buns and fruit snacks from the corner store, and hot sausages and pickles from the neighborhood candy lady.

While there are many stories of cancer patients never being made aware of alternative options for treatment, the doctors at the Cancer Treatment Center of America in Chicago did well to inform Jerri's mother of how much her diet was contributing to her declining health. Foods filled with added sugar, processed foods such as lunchmeat, and genetically modified organisms (GMO) such as corn and soy products all played a role in the development of cancerous cells. "I will never forget her doctor asked her, 'Do you want to survive? You have to want this more than what I could do for you.' And of course if you ask any cancer patient the answer is yes."

After her mom returned from the Cancer Treatment Center she decided to no longer feed the cancer, but to starve it altogether. “She realized that if she was going to beat cancer it was solely going to be up to her and the things she consistently did, and she became very aggressive with the transition."

Jerri came home one day to find her fruit snacks and honey buns tossed out, and shopping trips to Costco and Safeway soon replaced by ones to Whole Foods. “We're like whoa, lady, we don't have cancer, why do we have to eat this? But ultimately she was just teaching us that it's a lifestyle. It's not about what you have to change; it's about making that change now.

"It's not about what you have to change; it's about making that change now."

For nine-and-a-half years Jerri's mother successfully fought against cancer by replacing the standard American diet with one filled with organic fruits, vegetables, whole foods, and juices, which she often shared with family and friends who would come by the house. But in 2010 she lost that battle, and Jerri's world came to a halt.

At the time she was working in Atlanta at Lockheed Martin where she oversaw the building of weapons for F-22 fighter jets. Shortly after the news of her mother's transition, she quit her job. "I did absolutely nothing for about two years; I just traveled. I bought any and everything that I could. I had a closet full of unhappy because I just wanted to feel something again, and my mom and I were extremely close. All of my friends were like well what's next, what are you going to do? And I just didn't know, and I didn't want to do anything. I just wanted to be unhappy because that was just the safer place for me and the most normal thing.

“I just wanted to be unhappy because that was just the safer place for me and the most normal thing."

It took her mom appearing to her in a dream to pull Jerri out of her slump. “She was standing in my door while I was in my bed and she was like, 'why are you so broken?' And I'm looking at her like really, you're really asking me this? And she said, 'you're obligated to continue creating.'"

Jerri wasn't sure what her next steps were, but she knew she had to get back to her hometown of D.C. Once she relocated she realized that though she wasn't overly passionate about juicing, she had an obligation and love for helping people. She continued what her mother started years ago, which allowed her to fulfill both the part of her that wanted her mother's legacy to live on while inspiring others to live healthily.

With just $300 and a newly purchased juicer from her cousin, Jerri launched Turning Natural out of her kitchen. At first she started with just doing juice cleanses, which she offered to friends and family. But word spread of her healing beverages and soon people were looking for individual juices that they could consume outside of a cleanse. “Now people want individual juices, and I was not about to deliver individual juices because it just didn't make sense. And so I said okay, now we may need to look into getting a space."

Jerri, admittedly, was nervous about opening her first juice bar in what she calls a food desert. The USDA defines "food deserts" as areas in inner cities or rural areas were low-income residents have less access to affordable healthful foods. Though she knew the healing power of her juices, she wasn't sure if a community that was used to Popeye's and corner stores would be willing to shell out $6 or more on her healthy drinks. She considered opening the shop in a more health-friendly area, like Georgetown, but decided that her own people should have the opportunity to live a better lifestyle just as much anybody else. "I felt convicted. How dare I take something that my community not only needs but also deserves to another community that it's normal? Let's bring that normalcy in our own space."

Today, Turning Natural is successfully feeding and empowering the community with healthy alternatives. Walk into any one of her three shops and you'll see knowledgeable staff members educating customers on their menu items that feature fun and relatable names such as the Green Latifah and Swizz Beatz, as well as a full salad bar, and vegan and vegetarian food items.

For cancer patients, she offers juices for free.

"You just see the life come back into them. They feel hopeful again. They feel like they're aren't many plans out there for people with cancer other than just conventional medicine and so when we do the juicing they come back and they say my energy is much better, I don't feel as fatigued, and even though I'm still not eating, I feel nutritionally balanced because I'm getting all of the nutrients that I need in this juice. Those stories are very, very encouraging and it makes those difficult days a little bit easier."

Jerri hopes to open more stores in the DMV area and entrust stores to dedicated staff that's committed to her vision to build upon her mom's legacy. While she never imagined that she would own juice bars, it's possibly the very thing that's saved her life just as much as others.

“It makes me very emotional that people trust me with their health and that people believe in the vision, they believe in my mom's story. And I'm extremely grateful for that."