Remember That Elite Dating App From 'Insecure'? I Tried It .

This is what happened when I tried The League app for 30 days.

Issa Rae's Insecure has been taking millennial, men and women alike, to church for the past few summers. Mostly because it's a representation of us and how we date and how we do life that is more accurate than most. It's the most authentic show that the black community has received in quite some time and it shows.

So in season one when Molly was simultaneously trying to fix her broken pussy and prove to Issa that being single was not where it was at, she made mention of a dating app that many of us had never heard of before: The League. An alternative to the other mediocre dating apps that we are aware of, but especially Tinder which Molly refers to as a "fuck app."

Something like those inconspicuous 555-5555 phone numbers your favorite shows of the 90s and early 00s would give out, many of us weren't sure that this elite dating app actually existed until we were. Curious, I made it my business to try this app that was only for professionals (it even connects to your LinkedIn) — a truly elite concept. And, not going to lie, a standard that sits damn-high on my list with a handful of exceptions is a man who is career-oriented.

I reached out to the League and was able to bypass with mile-long waitlist with these xoConnects — not even going to hold any of you up, let's just keep it all the way real. And while in theory the app would be great, I'm almost positive that Insecure took creative license with the fish Molly was catching using this app (in that they were all black men). Spoiler alert: That was not my experience.

Let's start with the bad and just rip the bandaid off. When or if you decide to use The League, you might be surprised by the lack of black or brown prospects at your fingertips. As an elite dating app, there are a handful of possibilities to consider. So here it is: 1) as a people, we don't have the resources to frequently become the "elite" and thus there aren't nearly enough of us to use this app in hopes of finding #BlackLove. Although growing, we know that the ratio of institutionally educated black men to women is off kilter and it shows when you're using the app. 2) We know based on OkCupid's 2014 finding that Black women are the least desired amongst all races of men, including our own. And if this app is further indication, well then, the odds are only further stacked against us, me, we.

While I wouldn't go as far as to say that the app marginalizes users of color because that is beyond them, its elite touch serves as a bigger reminder of the prejudices held against black women and the difficulty that comes attached to our prematurely marginalized identity. And I was not someone who was only seeking out black men, but as a natural black girl, I can't say that this was my crowd. The reality is, to fit into elite crowds we are asked to do away with features such as natural hair and that translates to the microcosm of the world that is dating apps. 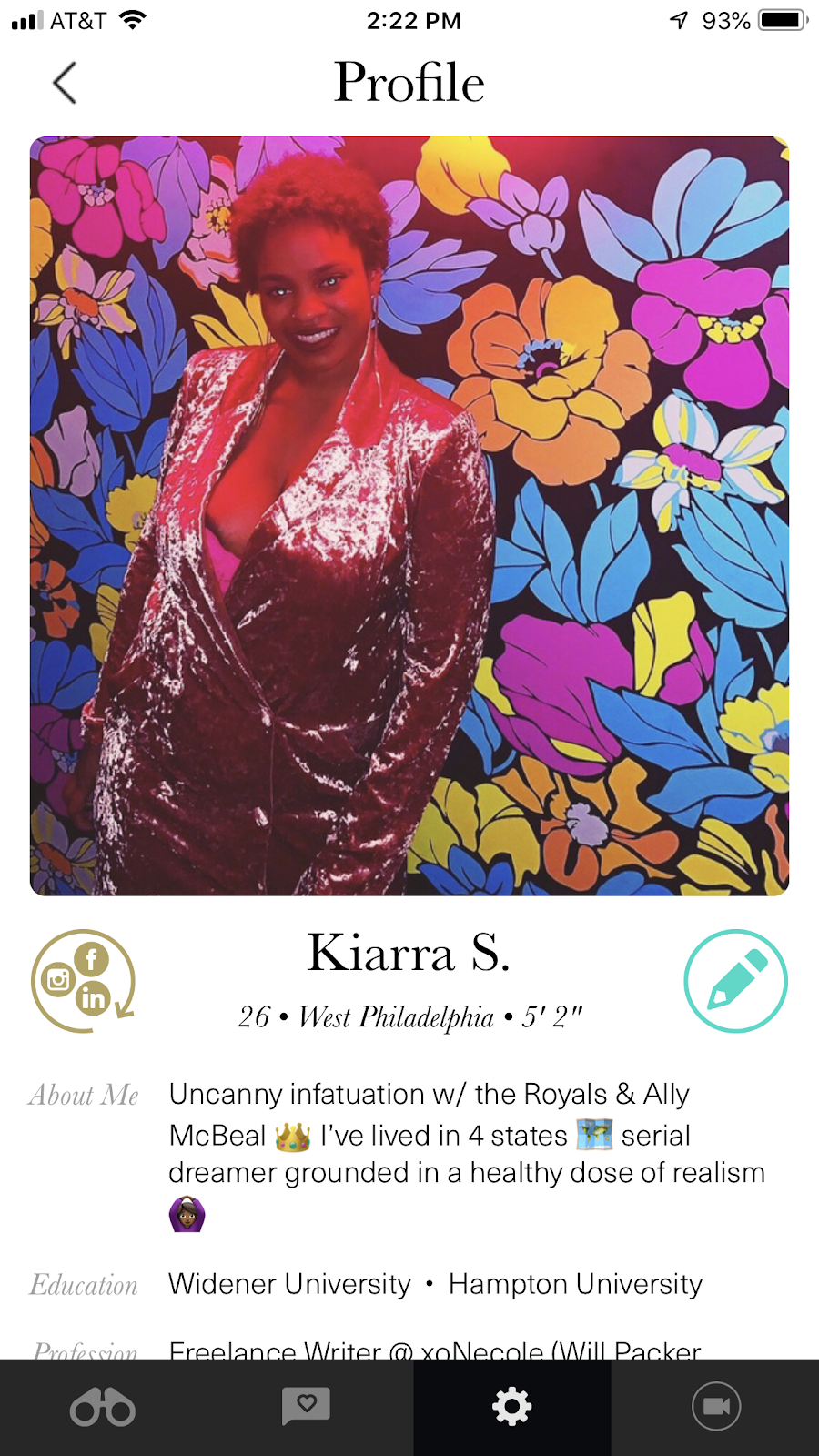 I also would like to throw out there that I was on the app consistently for a month (while they suggest spending three months on the app); nonetheless during my time, no dates came to fruition. Most of the men I matched with were stiff and the dialogue felt forced, as in I am of the belief that a person who is interested will not leave me on "Read" for days and then come back to the dialogue multiple times. Which is fine, it simply means we didn't vibe and that's bound to happen.

What the app gets right is that in asking users to pay for a better experience, you are absolutely weeding out the weak links from the winners because anyone who is not serious about dating in a promising way is not coughing up membership fees to utilize a dating app. Most might find the membership fee steep, but quite frankly it wouldn't be an elite dating app experience if the price didn't say so. Oftentimes, we don't see things as "elite" until the price point parallels the very definition of that and The League is no different than that in this right.

Furthermore, the way they hold users accountable by revoking privileges and membership when you've been inactive is another hurdle that weeds out the clowns and clownettes of the dating pool. This can feel both overwhelming but also exciting because you are only able to swipe on five people per day--leaving you with something to look forward to and a reason to return. New swipes are available at the cost of tickets (which can be purchased) or the next day at 5 o'clock i.e. Happy Hour.

But the best part is the concierge, who not only is there to gently nudge you when you have been inactive, but also provides personal customer service to help you create a profile that is worthy and winning. I took advantage of this element asking my concierge for tips on how to improve and took any feedback they provided to up my odds.

The algorithm, according to my concierge, is able to prioritize traits like humor and even better users who have six clear pics of themselves -- eliminating the hella annoying crowd who enjoy using group photos on their dating profile that have us stuck and confused like this:

They also provide a community of people with groups and local events that allow users to create meetups of their fellow league members. This brings back the traditional and desired, but nearly obsolete element in modern dating which is the potential to meet and connect with people in real life.

As someone who feels conflicted, I feel unsure about what platform best serves my generation as we seek out romance that lasts more than a few pumps.

I would say that The League has the potential to be the Match.com of elite millennials, bringing the modern to the Matches of the world. Perhaps as they become more known to black and brown elite communities, the potential for matches will increase, making for a higher rate of matching. As it stands, the app only serves a handful of communities but works efficiently to do roll outs in more cities each day.

Want more stories like this? Sign up for our newsletter here and check out the related reads below:

What To Wear On A First Date

Are You Guilty Of Making These Dating Mistakes?

This Is What You Can Get Out Of A BAD Date

Are Dating Apps Lowering Our Standards?

Gabrielle Union is not here for the label stepparent. While she became a stepparent after marrying Dwyane Wade in 2014, that doesn't mean that she wants to be defined by it. The actress spoke about the dislike of that term during her appearance on Glennon Doyle's "We Can Do Hard Things" podcast.

10 Creative Ways To Express Gratitude In Your Relationship

It was actually pretty close to this time last year when I penned the piece "How To Get Through The Holidays If You Don't Observe Them". Unlike some of the other articles that I write for the site, I pulled that one from very personal experience. Being that my personality is very wired to "be good" on something once I know its origin, holidays are something that I tend to take a pass on; this includes Thanksgiving (some insightful reads on its origin are found here, here and here). Still, this doesn't mean I'm not aware of the fact that many people use this time of year to reflect on their blessings and to say "thanks" for all the good that has come their way. Since I like to write on relationships a lot, I thought to myself, "Why not come up with ways for people to show gratitude to their significant other?"

Operating At A Low Vibration? Here Are 5 Ways To Change That.

I didn't want to say that I was having bad luck. That's not something I'd ever want to speak into existence over my life. But I will say something wasn't right. I had a few coins stacked in my purse from a one-time project as well as from an ongoing one. Then I received emails from not one but two publications within days apart asking me if I'd like to contribute a few articles every week. Opportunities and money were flowing in. If you follow the law of attraction, you'd say I was vibrating on a high frequency.

Tinashe has learned a lot about her mental health while growing up in the entertainment industry. The singer/songwriter began dancing at four years old and had her first movie role at five years old.

From there, she went on to be in a girl group The Stunners and act in TV shows like Two and a Half Men. Now as an independent artist focusing solely on her music, the "All Hands on Deck" singer opened up about the struggles she faced in the industry.

My favorite time of the year is the start of the official boot season which begins during the transitional period between summer and fall. What's most exciting about the sudden drop in temperatures is stepping back into those sleek pair of boots for the first time in months. Whether zipping up oldies but goodies or investing in a new fall 2021 boot trend, this year is all about the calf boot. Specifically, this is the best option when easing your summer clothes into the appropriate fall looks.

10 Warm Drinks That Are The Perfect De-Stressors