What Self-Care Looks Like To Yahoo Entertainment Host Kennedy Johnson

For xoNecole's Finding Balance series, we profile boss women making boss moves in the world and in their respective industries. We talk to them about their business, their life, and most of all, what they do to find balance in their busy lives.

If you ask Kennedy Johnson, she's always been a star in the making.

She recalls vivid childhood memories of her younger self, enchanted by the lights, cameras, and production behind shows like Zoom, TRL, 106 & Park and America's Next Top Model. The latter, specifically, acted as the initial spark to motivate her career path, as well as her 4th grade career day costume inspiration. "I showed up to school with my prompt cards and portfolio as a supermodel, which, looking back really meant that I wanted to be on TV."

Even though Kennedy had her mind made up on what she wanted to become, she still had her parents to convince. Growing up in a household with "9-5 focused" parents made Kennedy's career choice in the entertainment industry a difficult one to take seriously; so she tried things their way. After a short stint at her local community college, Kennedy instinctively knew that college just wasn't the path for her. In turn, she followed her mother's footsteps and for three years, she worked as a front desk agent at a hotel. Still, something inside was calling her beyond her Atlanta roots and into the concrete jungle where her dreams lied.

After being accepted into a performing arts school in New York City, it didn't take long for her to realize that this too might not be the best fit, "When I got there I realized it was a bunch of white kids coming straight out of high school. I was 24 and needed to work full-time. So I dropped out."

It was time for Kennedy to put all of her focus into her craft, so she took a leap. Now, the serial creative has taken full advantage of the stage that social media has created for her. As a YouTuber, model, host of her very own Instagram Live show, Live with Kennedy, creator of the natural hair page, Curlss for the Girlss, and on-air host for Yahoo Entertainment, Kennedy didn't idly wait for her audience to come, she created her own. Confidence is key in the industry of entertainment, and Kennedy's cup runneth over thanks to her mom and faith, "My faith was really the push that made me realize that if I don't have my shoulders back and my head up then I'm not really being grateful for what I have."

With the many blessings and endeavors on Kennedy's plate, how does she maintain it all? In this segment of Finding Balance, we ask this media maven just how it's done:

What does an average day or week look like for you?

Whew, girl. Now that I'm working for Yahoo Entertainment, I go there every morning, Monday through Friday. It's a lot different from my freelance schedule because I created my own schedule. I would get up, eat, record a YouTube video – if I wanted to – or I would just get on Instagram and do videos. Either way, it was about being active on social media, that's a daily thing that I have to do. I have to post on my pages in order to keep up that momentum and keep people interested in my content. Everyday requires that, and physically coming into Yahoo Entertainment every morning.

What do you find to be the most hectic part of your week? How do you push through?

Girl, just trying to get out the house! I'm trying to tell you, I am tired of getting up and leaving my house every day. I'm still trying to adjust to that and the commute everyday – getting on the train, dealing with MTA and their bull. That, every day, is so annoying. 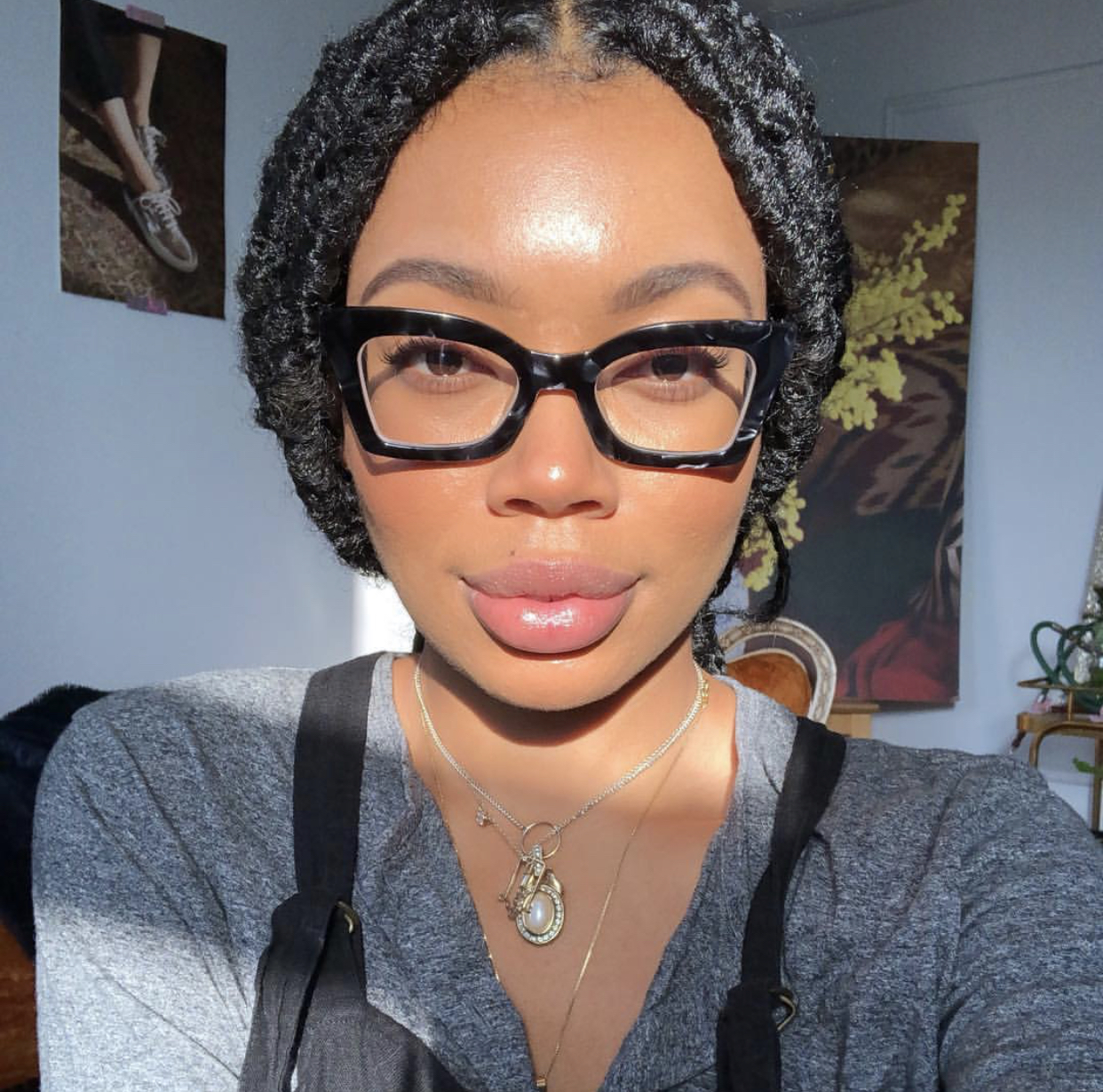 How do you practice self-care? What is your self-care routine?

I don't think that I do intentionally, but there are things that I enjoy doing that I'll make sure I make time for. For instance, I like painting my nails; it's very therapeutic for me. I have to do my hair every day and whenever I do my hair, I have to have a good Netflix show to watch. I really pay attention to what new Netflix shows or movies are out that I'd be interested in watching while I do my hair. For me, those are the simple self-care things that have to be done anyway and I would consider those to be my own personal moments to myself to gather my thoughts. Also when I'm vlogging or on my Instagram Live show called, Live with Kennedy, it's really therapeutic for me to just talk and get things out and share my feelings about certain things.

How do you find balance with:

To be honest, I have one best friend. So for me, it's not hard to balance that because I only have one person I have to worry about. (Laughs) Everyone else, I would consider to be great friends, but the type of energy I put into those relationship, it's not the same that I have with my best friend.

Ohh, girl… well… I'm newly single. I was in a four-year relationship with a man who was so great and I will love him forever. He lives in Los Angeles, I live in New York, and it was just hard trying to maintain the type of relationship we had without seeing each other as often. Now as a single woman, living in New York City, I'm just trying to figure it out. I don't really think my man is in NY, I'm not attracted to some of the guys up here. I'm from Atlanta and I just feel like the guys down South just move a little different and I don't have time to be looking over my shoulder every counter we walk by. I'm cool on that.

I feel like it would be a bit distracting to try to get to know someone while you're getting to know yourself. That energy, especially when you get physical with somebody, can be misinterpreted in what type of connection you have with them, and I don't have time for that. I'm not trying to feel like something is happening when it's actually not. I'm just trying to focus on myself.

"If I haven't stretched in a while, I'm going to feel it in my waist walking to work. I just try to be honest with myself and my body." 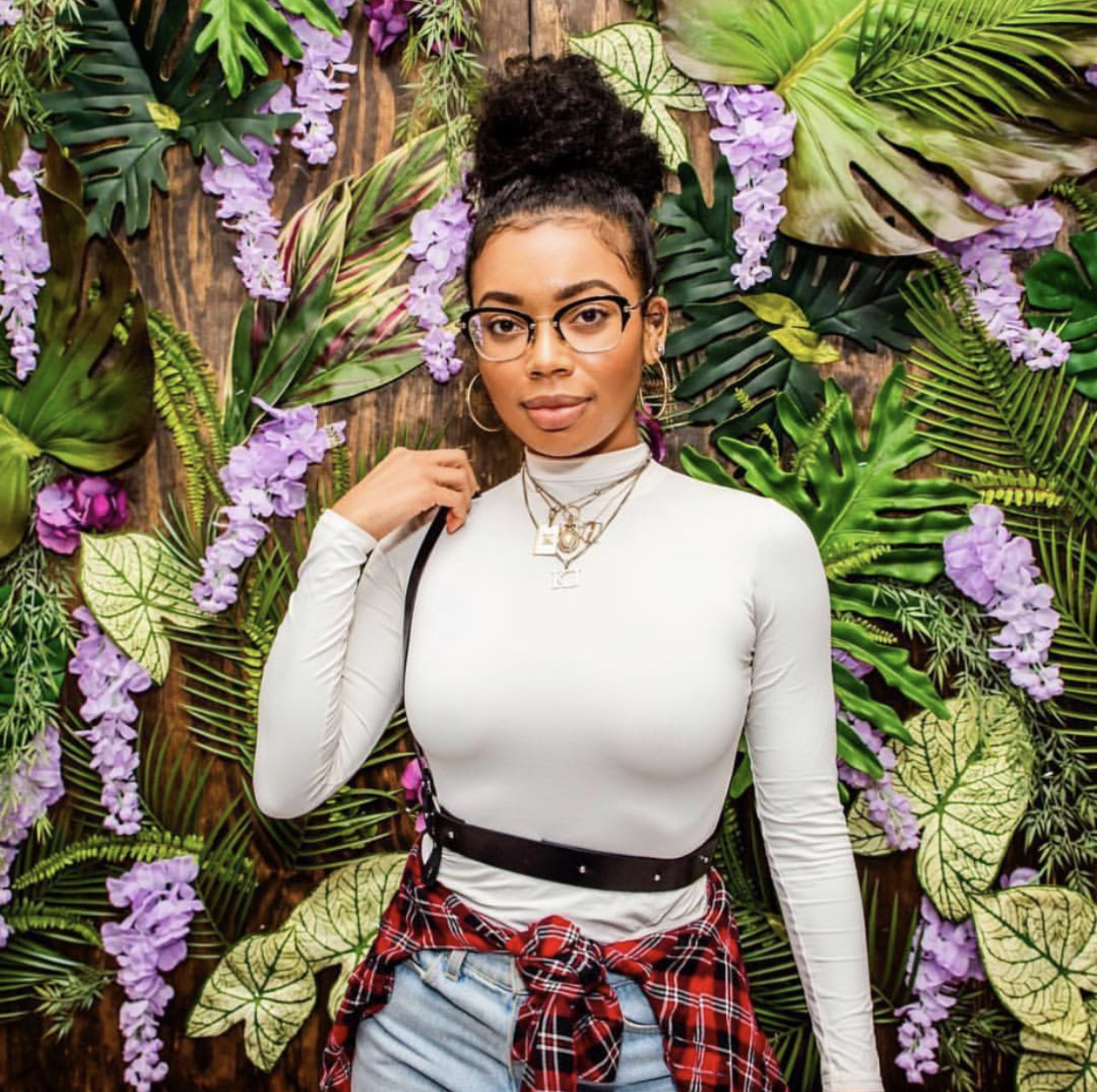 Exercise? Does it happen?

Look, exercise is cute and I know it's necessary, but one of the blessings that I have received is that genetically, I have a very fast metabolism. I don't have to workout like that, but just in terms of staying in shape, I do like to yoga every now and again.

Self-awareness is a real thing. I know that if I've been eating a lot of junk, I'm going to see it in my face. If I haven't stretched in a while, I'm going to feel it in my waist walking to work. I just try to be honest with myself and my body. I know that I need a certain amount of nutrients in order to be fulfilled. I gotta have my greens, my water, my fruit, and I have to do that every day. So I'm just being smart, moving smart.

Do you ever detox? What does that look like for you?

I haven't done a social media detox because I don't think that social media affects me in that way. I am on there a lot, but I'm not putting on an act, I'm being myself, and if I don't feel like talking, I don't. I'll post pictures of other things and inspiration. I'm engaging in other ways, so I've never felt like it affected me in a way where I had to completely remove myself from the app. Although sometimes it can be overwhelming, like I'm tired of hearing certain stories about certain folks, but I just don't look at those pages on those days. 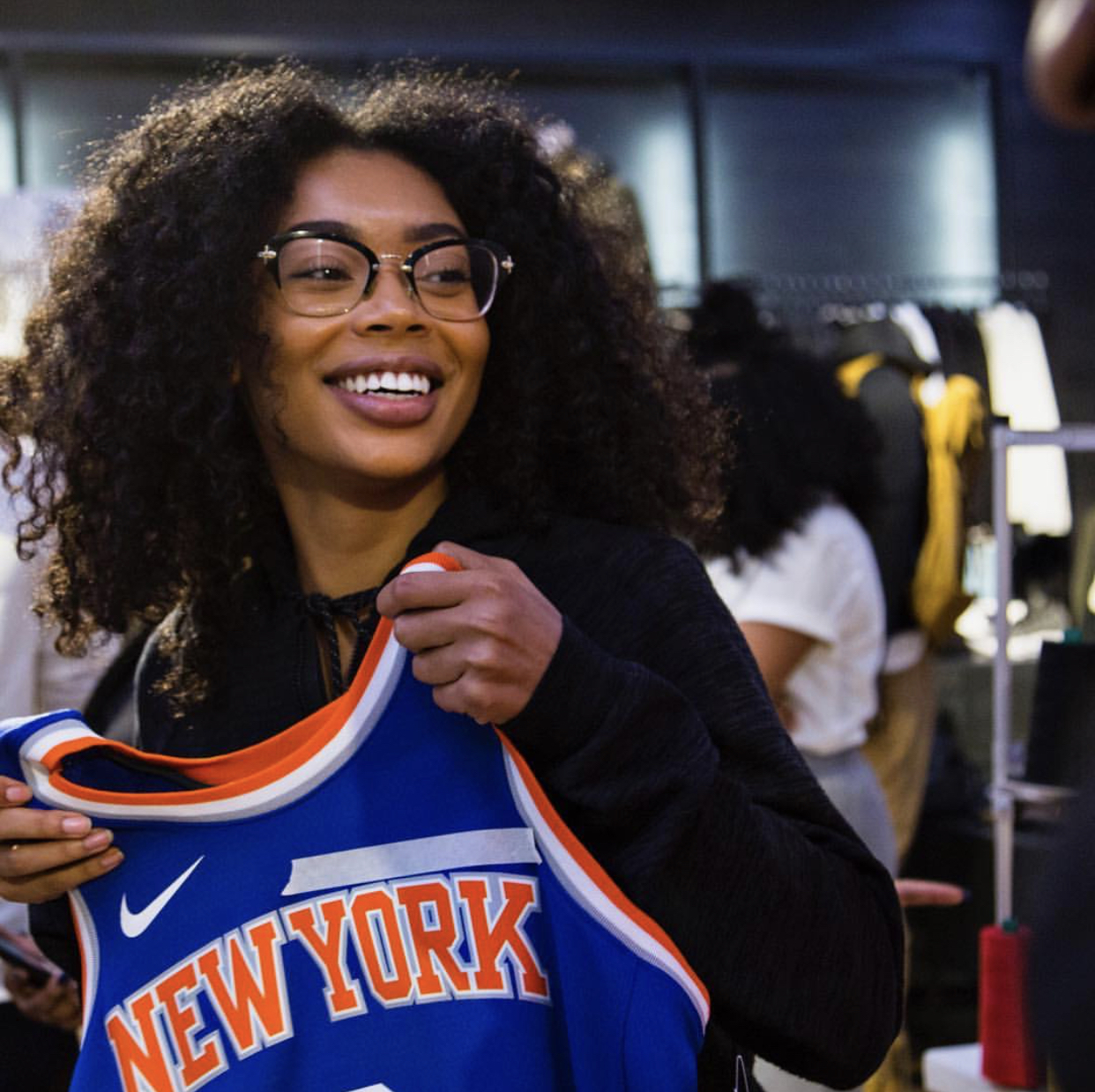 When you are going through a bout of uncertainty, or feeling stuck, how do you handle it?

I spend some time with myself. I trust my judgment and my intuition and I can't do that if I'm surrounded by a whole bunch of noise. I also just look at things dead-on, or allow myself to just take a break. Like, I'm not about to get fired from YouTube. One of the things that I've allowed myself to do is live in my truth: I am my own boss so if I don't want to do something, I'm not going to do it. It's a simple as that.

What does success mean to you?

Being able to do whatever the hell I want to do. Working with who I want to work with, talking about what I want to talk about, moving how I want to move, and money not being an issue. To me, that's my version of success. Freedom.

What is something you think others forget when it comes to finding balance?

I think people forget to be honest about where they are in their life. When we're trying to create some type of balance or self-care in our life, we want to go off of this script that we found from somebody else's life story. We try to follow those steps and it doesn't work for us because we're not considering the fact that we have different lives. For me, I always consider my own situation first, then I try to implement what I've seen in other people and see if it works for me, and if not, I just modify it. If you have responsibilities that need to be taken care of, don't beat yourself up because of what you see other people doing, everybody's story is different.

"One of the things that I've allowed myself to do is live in my truth: I am my own boss so if I don't want to do something, I'm not going to do it. It's a simple as that." 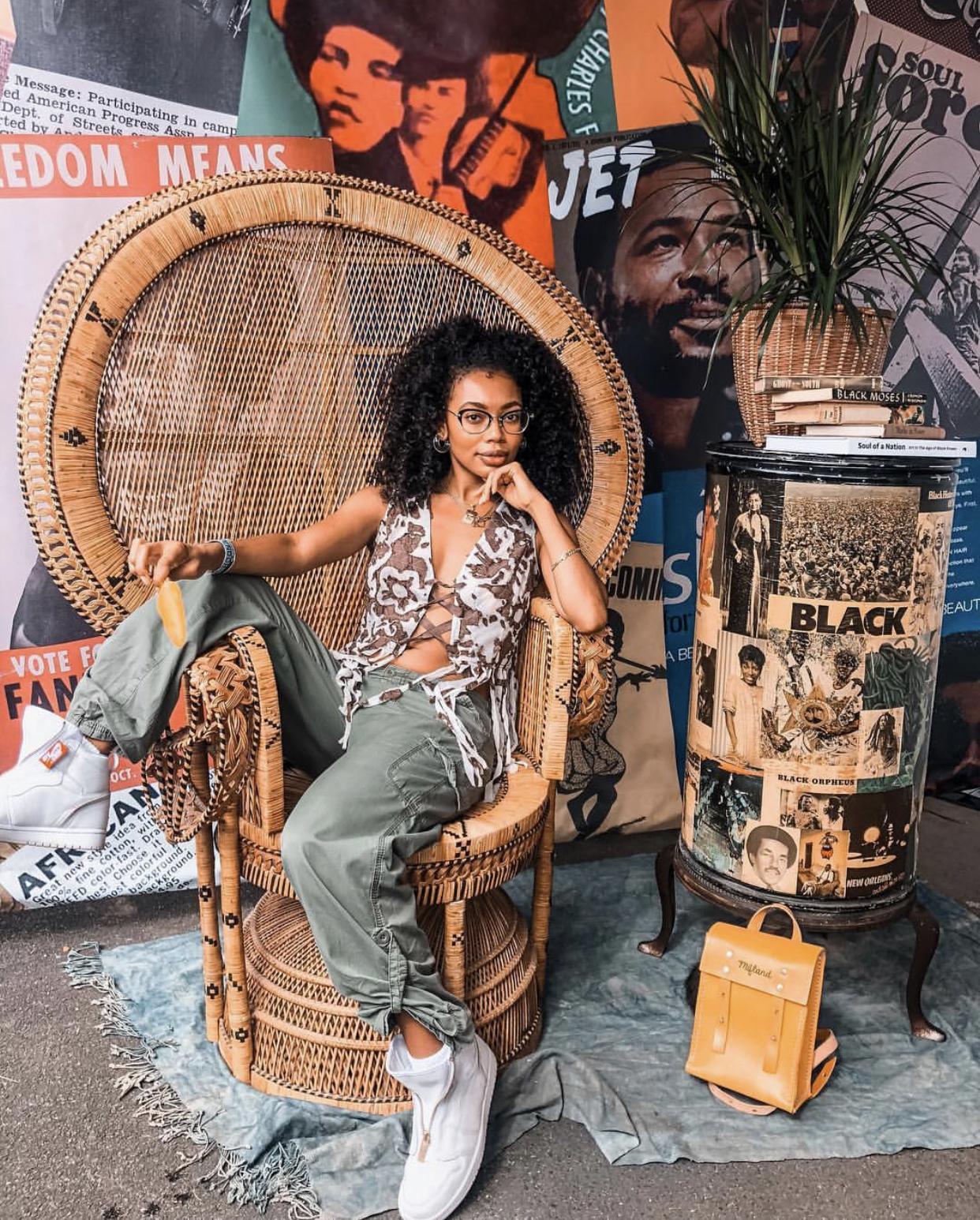 For more of Kennedy, follow her on Instagram. And check out past women we've featured on Finding Balance women by clicking here.

Aley Arion is a writer and digital storyteller from the South, currently living in sunny Los Angeles. Her site, yagirlaley.com, serves as a digital diary to document personal essays, cultural commentary, and her insights into the Black Millennial experience. Follow her at @yagirlaley on all platforms!

Actress Sasheer Zamata On Being 'Woke', Saying No & Manifesting The Career She Wants

Don’t Leave Your Next Job Interview Without Doing This.

How Becoming Spiritually Woke Is Empowering Women To Choose Themselves

Trust & Believe: These Finds Will Help Revive Your Second-Day Curls

Christian Keyes Doesn't Believe In Falling In Love With Potential

"When you date with a purpose, you date on purpose."

Is There Really Such A Thing As A "Perfect Match"?

10 Superfoods Every Woman Should Eat On The Regular