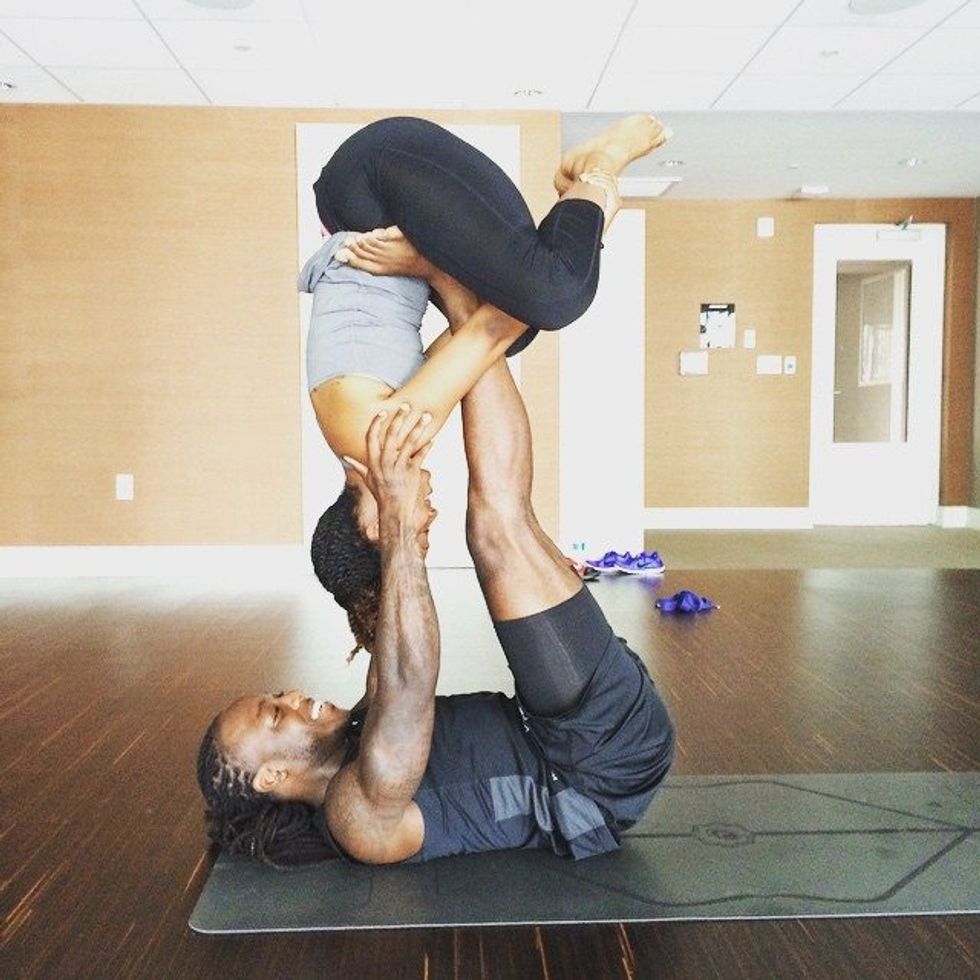 While the physical benefits go well beyond the mat, it’s the mental benefits that Shelah believes is essential to helping couples in and...

No, these aren't names of kinky sex positions (although they can be), but yoga poses designed to help get your mind and body right. It's a practice that actress Shelah Marie and her boyfriend, rapper Ace Hood, know all too well. In fact, it's part of what caught my eye when a post of the couple went viral with the caption:

It lead me to scour their Instagram pages, where images of Ace Hood—legs crossed, hands open in quiet meditation—graced his feed, while images of Shelah giving #bodygoals popped up with every downward scroll. I was certainly loving the cute selfies the couple took together, but it was an image of them meditating together that really stood out.

One, because seeing a rapper who's actually being still is freaking amazing. Outside of Russell Simmons and David Banner, I don't know too many hip hop artists who speak openly about meditation. Also, they both looked to be at such peace—with themselves, and one another.

While the physical benefits go well beyond the mat, it's the mental benefits that Shelah believes is essential to helping couples in and outside of the bedroom. “You have to sit and listen to yourself and be comfortable with yourself, and you also have to do the hard work. And I think yoga, when you practice sitting in a very uncomfortable position for a long period of time, that mindset is transferrable to other parts of your life."

Everyone is looking for that secret formula for a happy and fulfilling relationship. Great communication, willingness to compromise, and fulfilling your partner's needs are just a few tidbits that married couples have passed down to those of us who are single or navigating the murky waters of love. But what if someone told you the answer lies not just within your actions, but in your attitude? And that embracing the ancient practice of yoga can help prepare you for the trials and tribulations of relationships?

When Shelah first started doing yoga four years ago, her original intent was to get back into stretching to increase her flexibility. Although she's always been active in fitness, as she got older she started noticing a change in her body, and wanted to do something that would push her beyond her limits.

“I've always been interested in what you can do with you body, and I've always taken dance classes, so fitness is just an extension of me challenging myself physically and mentally and sharpening my tools."

Through meditation and discipline, Shelah continued to grow in all areas of her life, but it wasn't until her partner Ace Hood expressed interest in doing yoga that the practice begin to not only impact her life, but her relationship as well.

Shelah was admittedly surprised that Ace was open to yoga, mainly because of the stigma that yoga is a feminine practice, despite becoming more popular amongst males. But the artist, who is also athletic and does MMA training, was looking for something that would add stretching to his strenuous workouts. “Ace is an open person and he's very smart, so he can tune into when something can be good to you, and he's like I'll give it a try at least. But he was actually really interested in yoga before I introduced him he just never had the opportunity."

Not wanting to get his feet wet in a formal class (let's be real, it's can be distracting to be in a room of women contorting their bodies into unimaginable positions), Shelah reached out to a Racheal Weathers—a self-taught yoga guru who goes by Yoga Racheal, and who has gained a massive following on social media—who agreed to do private sessions with the couple while they were in Los Angeles for the summer.

“I followed her for like a year before that, and I remember thinking look what she's doing with her body! I'm attracted to people who do interesting things with their body, because it's a reflection of other things to me. I saw her discipline, she's super flexible, and can do all of these cool poses. She used to move me man," says Shelah.

The first session was intense. One that Racheal remembers being full of laughs and tears as the couple learned to come together as one through partner yoga. “When couples do [yoga] together, it's just total different connections. On a physical level, it's like if you do something wrong they're going to fall and vice versa. And the connection is just different; I feel like it taps into a whole other part of the brain, a whole other part of the emotional ecosystem in our bodies. It definitely creates a deeper connection," says Racheal.

Shelah accredits Racheal's soft style of leadership to making the session peaceful and productive. They pushed past their weaknesses and learned to be strong in areas where the other lacked. For Shelah, it was her core and arm strength that needed work. For Ace, his flexibility.

It also helped bring the couple closer together as they mastered each other's love languages. “I would say ultimately they're communication increased. Not that they had bad communication, but it got better and better," Racheal says.

And of course, adding to their sex life didn't hurt either.

Shelah also noticed a change in how Ace approached life. As a rapper, the “can't stop, won't stop" mantra is real. Running from show to show and in and out of studios at all hours of the night leaves little time for rest, and being in the game where everybody claims themselves to be hustlers, it's no wonder that sitting still can sometimes feel uncomfortable. But yoga forced Ace Hood to slow down, breathe, and take a moment to get his thoughts together. Now it's nothing for him to wake up and sit in silence for 10 minutes before paper chasing.

Shelah says in awe of her partner, “I think he's so brave. I used to tell him that in the beginning, just being with a black girl who has natural hair and not being afraid to go out and meditate, I think it's brave for somebody in his position. He's going to wake the game up and let them know what time it is!"

As far as the overall impact to their relationship? “I would say it changed many parts of our relationship. The fundamental idea of yoga, if I understand correctly, is yoga and meditation are together. Because it takes the meditation to soothe yourself and actual tangible actions that you have to do. And that's why it's beneficial for a couple because it goes both ways."

As the saying goes, couples who sweat together, stay together—great sex is just a bonus.

Your October 2022 Horoscopes Are All About Finding Flow & Alignment

October is a month of balance. With some energy moving direct and some energy moving retrograde, there is a middle ground to find this month between what is unfolding and what you are letting go. The month begins with Mercury officially moving out of retrograde and going direct in Virgo. Mercury this month is cleaning house and sprucing things up after the somewhat tyrant energy it’s brought over the past few weeks. Now that Mercury is direct, there is less interruption when it comes to daily flow and plans, and this is a good month to start setting things into motion.

No one prepared me for how horny I would be in my late 30s. All the elders in my life prepared me for random chin hairs, weight gain, and menopause but no one said a mumbling word about my sex drive. Something happens the closer you get to forty. I went from wanting sex here and there to wanting it all the damn time. Is there a support group for this? I can’t be the only one who has the sex drive of the Energizer Bunny. Upon my research to figure out why I felt like a cat in heat, I discovered several theories surrounding women and our sex drives–including one that says the concept of having a sex drive is a myth altogether.

Da’Vinchi has appeared in many television series such as All American and Grown-ish but it was his role in BMF as Terry Flenory that helped propel his career forward. Since starring in BMF, he made his Broadway debut with Thoughts of a Colored Man and is currently shooting an undisclosed movie in Vancouver. The 26-year-old actor is beginning to see the fruits of his labor and so it’s hard to imagine that he almost went in a different direction. Da’Vinchi spoke with xoNecole’s Dana Blair for our xoMan series about acting, being a sapiosexual, and protecting his peace.

If you have been on social media for any significant amount of time this year you may have come across women saying that they are in their “villain era.” For these women, being a villain means embracing the negativity and judgment from others that comes when you say “no” to people, and living your life unapologetically. For them, being a villain means letting the chips fall where they may when you no longer allow other people’s ideas about you to restrict you from living the life that you want and deserve.

When Niecy Nash-Betts announced she was married to musician Jessica Betts, many people were surprised. The Emmy-nominated actress has a history of dating only men and was even married twice prior to meeting her wife. However, Niecy has become an example of the saying “love is love” and she and Jessica have been open about their relationship ever since.

How Each Of The Zodiac Signs Get Over A Break-Up