From The Hood To Silicon Valley: Rukayatu Tijani On What It Means To Be A First Generation Attorney

There's a billion-dollar industry promising to guide the masses to purpose.

Best-selling books adorn polished store shelves waiting to be read by those starved for answers. Sold-out conferences and seminars convince us to look to their hosts for guidance. Podcasts crash through the glut with episode after episode of anecdotes, interviews, and advice. Everyone's got 'the key' to ultimate success - whatever that may mean today - and we pay them our hard-earned money and our time when many of us haven't spent time examining the course of our lives for the glimpses of destiny we so desperately seek.

The course of Rukayatu Tijani's life made her destiny clear early on. Her path to studying law was set at five years old, when she learned of African-American giants of justice like Thurgood Marshall and Charles Hamilton Houston. Their carefully crafted and executed litigation strategies dismantled structural racism in education and formed the foundation of American integration as we know it today. This narrative intrigued Rukayatu, or "Ruky," as many lovingly call her, and motivated her to forge a path similar to those legal champions whose pictures now grace her office walls.

Creating a career in which she could catalyze equity, inclusion, and the reclamation of dignity was exactly what she wanted to do. But there was no blueprint for a first-generation Nigerian-American girl from the projects of Brooklyn, New York.

So the path to her Juris Doctor would be hers to cut, step-by-step.

"Looking back I'm really grateful that God kept that vision consistent, notwithstanding the context in which I grew up," she says reflectively during our call. "There's a complexity to my upbringing that I've recently brought to light; my 'hood,' where there were crack vials in the staircase and urine in the elevators, formed the foundation, in a sense, of my grit, drive, and tenacity. But it also brought forth feelings of immense pain, torment, and trauma. I never really saw attorneys growing up, so the fact that I can [now] be an advocate, and use my Brooklyn beginnings to inform the work I do, is amazingly powerful, especially as I navigate the Silicon Valley."

"My 'hood,' where there were crack vials in the staircase and urine in the elevators, formed the foundation, in a sense, of my grit, drive, and tenacity."

Ironically, Ruky has had to do a lot of climbing in her 30 years of life to reach the Silicon Valley. Some upward paths found her pushing past fear of failure and survivor's guilt. But through it all, she found her footing, showing up as her authentic self - heels high, locs set, and her signature bright smile, stretching from ear to ear. She learned to navigate life confidently and define for herself what it meant to be a first-generation attorney.

Though her childhood wasn't easy, it isn't a past she wants to bury. Living in the inner city presented hurdles. With no close examples for who she wanted to become, Ruky found guidance and encouragement in sage mentors, her education, and sometimes, her own life. "I consistently say that I grew up in the projects because I'm proud of it. It taught me determination and resourcefulness."

Leaping Over The Bar

From the outside, it would seem that the path to becoming an attorney is fairly straightforward: study law, pass the bar, and land a job at a good law firm.

But this narrative is deceptive. A closer look at the details lays bare the specific ways in which many aspiring lawyers can fall through the cracks. And those details proved challenging for Ruky, as well as many first generation professionals learning to navigate professional spaces; spaces their peers were groomed to navigate from childhood.

"[The hardest part was] not knowing what I didn't know about the application process, including what I needed to do in high school and college and beyond. Just like there's a pipeline for prison, there's a pipeline for law school. From a young age, it's assumed that you're either going to be successful in this space or you're not; so if you don't 'fit' the success metrics, it can be hard to break into the field later on."

She benefited from the counsel of mentors and sponsors and participated in programs like CLEO, LSAC, TRIALS - all of which armed her with information she wouldn't have necessarily been privy to. "They encouraged me to take this journey step-by-step and I got comfortable asking questions. I had a village to help guide me along the way."

From a deep-seated desire to pay it forward, Ruky founded the First Generation Purpose Project, which helps first generation professionals create actionable steps in their workplace, career, and life by utilizing the tenacity and grit they already possess. The idea for FGPP came, Tijani says, from her own road to career success and the lurking feeling of wanting to give up.

"I'm a proud first generation four-year college grad but it was a difficult journey and janky road. I wanted to be a lawyer since I was 5. And while generally, I didn't waver in this sentiment, suddenly, less than two years into my career, I wanted to quit. In fact, I was determined to quit. But I didn't know why. I had to take time to unpack what undergirded my motivations. And after reflection, I noticed that a good number of my colleagues come from lawyer families. I didn't have that network or community to ask questions or figure out things with. I didn't have a community committed to convincing me not to quit."

And then there is the assumption that with a degree in hand or a white collar job secured, there is nothing left to do but enjoy a long stretch on Easy Street. This is not the case for most first generation professionals as they are still, to varying degrees, straddling two very different lives.

"[There is the] psychological difficulty of living between two different worlds. The 'homeless to Harvard' trope conveys that as soon as you get to 'Harvard,' everything is solved and that's just not true," Tijani explains.

"When I graduated from Berkeley (a top 10 law school), I came back to New York City and lived near Harlem. I navigated New York as a young urban professional uptown while my mom was still in the projects in Brooklyn. Although I 'moved up' in a sense, I was still tethered to a background that was, frankly, still under-resourced. I couldn't run away from this, so in order to engage and appreciate both worlds, I felt like I had to do mental gymnastics of sorts - essentially moving in spaces where people paid $500 for a pair of shoes, then returning to neighborhoods where a cab ride was a luxury."

Ruky realized she had to take the time to unpack two crucial questions: 1) Why this was such a hard journey and 2) Why no one else was talking about it.

She decided to start talking.

Through speaker presentations, one-on-one consulting, and telling her own story, Tijani wields the First Generation Purpose Project as a weapon against isolation, impostor syndrome, and intimidation for first generation professionals. Harvesting anecdotes from her own life and data from her research, she speaks to the most prevalent obstacles that first generation professionals face.

"One of the biggest [issues] I've seen is the inability to engage friends and family to 'level one up,' frankly, in career and everyday life. This inability stems from the seeming lack of networks and social capital."

Another challenge comes from the physiological and psychological effects of shifting socioeconomic statuses. This influences budgeting and forming healthy financial boundaries with family members and friends.

"What does it mean to now identify as a person with more means, newfound privilege, and social capital? And what can we do with that?" Tijani asks these questions as she finds answers along the course of her own life. And as a result, she stands as an example. "If we don't see it, we can't be it, so I articulate my story and who I am."

Clear on her grounding principles and practices, Ruky offers that prayer and an array of friends and mentors are important in combating impostor syndrome, survivor's guilt, and wanting to retreat to former comfort zones. "Prayer is the big tool. I also learned to be open to different displays of mentorship, including mentorship from white men who have been so gracious and have taught me a lot of the skills needed to hone my craft."

First Generation Purpose Project is another helpful tool to stay in a profession where she's often encouraged to leave - by friends and foes alike. "My pitch [with the FGPP] is that I'm teaching first generation professionals to navigate the workplace; this encourages me to stay in this space so I give legitimacy to my brand. It motivates me to stay in it for the long haul." 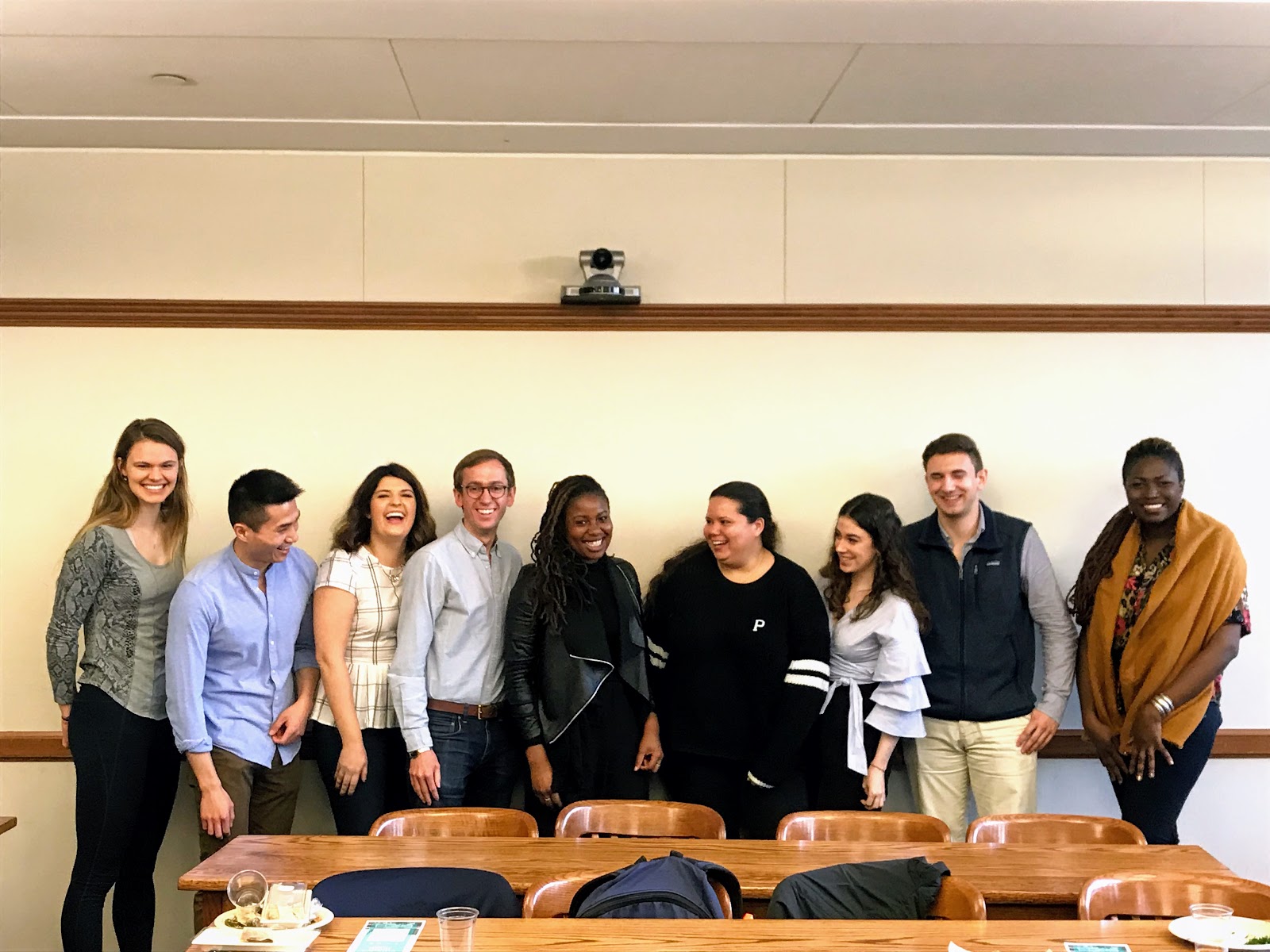 Her recent trip to Yale Law School was her first speaking engagement as founder of FGPP. "It was all student-initiated, which speaks to power students have in how they can shape the institutions they navigate," she recalls. "The night before my Yale presentation, I was creating an elaborate PowerPoint, making sure I incorporated all the bells and whistles. But at the last minute, I decided to chuck the presentation and speak from the heart. I spoke about passing the California and New York State bar exams while my mom was on food stamps. I spoke about the daunting task of leasing a car because I grew up with a Metrocard. I spoke about going to schools like Berkeley but coming home to different spaces in Brooklyn."

And the response to that honesty was overwhelming.

"The students said they'd never heard a talk like this and they were so glad they didn't have to let go of themselves in order to pursue their greatness."

The number one lesson she's learned along her path as a first generation professional?

"Keep going, God is working. If I could go back to my 21-year-old self or even yesterday, I would say keep going. Even if you don't see it yourself, somebody sees it. So it's going to work out, I promise."

You can connect with and learn more about Rukayatu's journey and work with First Generation Purpose Project at www.firstgenpurposeproject.com and on Instagram.

Achieve Your Wildest Dreams With This New Moon Ritual Bath

Guess What? These Foods Will Literally "Feed" Your Nails

7 Types Of Men To Avoid At All Costs

Um, Lori: We Need You To Drop The Skincare Routine, Sis