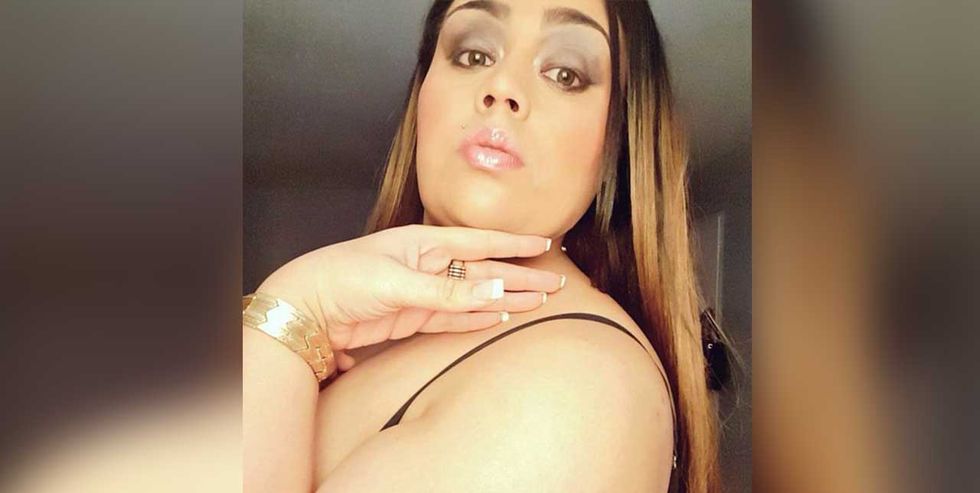 Confessions: I Am A Plus-Size Webcam Girl

The phrase, "Sometimes you have to do what you have to do," get's thrown around. A lot. But when you're stuck in a financial rut, and your choices for getting extra cash is limited, the same phrase takes on new meaning, and goes from "thrown around" to "real talk."

The truth in the "do what you have to do" phrase became real to me three years ago when my unemployment was set to run out. I had searched high and low for a job, and had no luck. I had just enough money left to pay one more month of rent, and a bit of groceries before imminent doom set in.

After running into one closed door after the next, I decided to get creative, and so I Googled "at home jobs." During my very frantic job search, I ran into a webcam modeling advertisement. I paid it no mind at first because there was one problem:

I never thought in a million years that someone would want to pay-per-minute to see me do things to my naughty bits, but curiosity really got the best of me. Not to mention that my bills had to get paid. I can't walk in heels to save my life so stripping was out. After signing up to be a web chat host, I shrugged it off for a few days. I mean who would be interested in me of all people?! Another Google search showed me that there were other plus sized women cam girls. I was already aware of plus sized women in the adult [film] world, just not with webcam. I also learned that there is a huge market for plus sized women doing webcam videos. It's a really diverse industry. I guess you can say I found the tiniest glimmer of hope in a job that kind of intimidated me.

To get my self ready for my first day on the job, I spent what little money I had on a new webcam. In my mind, it was due or die time. The next few days I got dolled up, but I couldn't bring myself to actually take the webcam out of the box and hook it up to my laptop. It hit me at that moment that I was scared.

But I was determined to keep a roof over my head.

The following night, after I dolled myself up again, I logged on to start my first shift as a cam girl. As soon as the site told me I was streaming LIVE, I wrapped my Hello Kitty snuggie around my head and body. I freaked out when I came to the realization that people can actually see me all over the world. Even my neighbor. Mom. Past employer.

As I sat like a deer in headlights someone logged into my chatroom, and asked me what was I doing.... That was a great question because frankly I was wondering the same exact thing. My first shift was 12-hours long. I made a whopping $37. I felt over joyed because well, those $37 were spent on me.

I was too broke to buy toys or lube for my cam shows so I had to make do with what I had. So on my second night, I defrosted my cucumber (you read it right). Looking back I remember the cucumber would defrost and there would be juice all over the place. After each shift I threw it back in the freezer. After about two weeks, it was done for.

It didn't matter anyway, because at that point, I was able to afford toys. I also met someone who would become a very close friend. He taught me how the website worked, what to say or do, and how each feature worked. I am thankful for him, because I probably wouldn't have been able to manage this job on my own those first few nights.

As each shift passed I started slowly growing my fan base, and my paychecks grew a little more as time went on. On my best night ever, I made just under $800 dollars. I made $11 dollars on my slowest night. I've also made $300 in an hour, just like I've made $0 in an hour. It comes with the territory and the nature of the business. I am by no means wealthy or debt free, but I can honestly say I've transformed myself into a confident woman who no longer walks into a room with her head down.

But somehow, my "lucky streak" started to fade away when I had to face one of the biggest hurdles that comes with being a webcam girl - telling my mom what I did for a living. In fact, I did the first two and a half years as a webcam model in secrecy because I did not want to worry my mother, and she already had a ton on her plate. I eventually told mom about my job after I had several setbacks around Christmas 2015. Two of them was the fact that my laptop and Internet were out of commision for an entire week, which meant no webcam and no money being made. I also had no idea how I was going to pay my rent. So I prayed that if a blessing came my way, that I would lead a more honest life. I guess you can say the blessing came in the form of a $700 credit card offer.

Just after I praised the heavens above I got a text from my mom. Somewhere in our text exchange, she asked me, "So what do you do for work? How do you make your money?"

I knew at that point, it was time for me to come clean. After a really long heart-to-heart, she ended the long text conversation with "go make that money honey."

I swear a thousand pounds was lifted off my shoulders. To know that my mom supported me meant the absolute world to me. Even today we joke about my job, and she'll ask me how work went. Everything is different now, even the energy I feel when working. I think because my mom was a single parent of four kids, she can genuinely understand how hard it can be sometimes.

The rough part of this job includes me not having a person who wants to know my spirit instead of my body. Most men claim they would date a cam girl, but when it comes down to it, they can't handle knowing that their girlfriend is off somewhere taking her clothes off for a living. I honestly can't blame a man for not being ok with dating a cam girl. Deep down, I wish men were more accepting of what we do, because the majority of us never meet our customers in person. But I crave human interaction, and the touch of a man's hands. My interaction with people is mostly on social media, where I'm networking, talking with with fans, or performing on webcam. I can tell you that it has been two years since I have hugged a man.

Perhaps being a webcam model is the reason why I'm somewhat afraid to date. A majority of men who I've allowed into my space ended up trying to use me for "freebies" rather than trying to get to know me.

I don't plan on doing this forever; however, it's how I survive right now. It's how I keep clothes on my back and food in the fridge. Plus, I haven't quite figured out what I want to be when I grow up yet. And I may never figure it out. But one thing I refuse to do is feel less than or hard on myself because I've chosen a non-traditional career path for the time being.

I'm still learning a lot about myself, and my hope is to teach women like me that it's OK to not fit society's standard of what beauty is as long as you are kind to yourself as well as others.