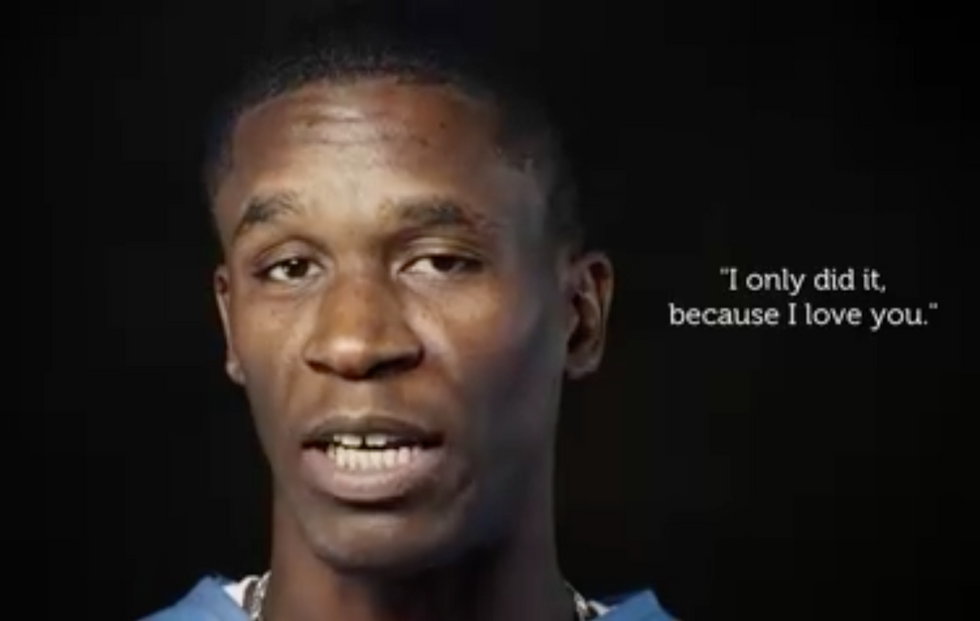 "I Thought Love Was Supposed To Hurt": The Negative Impact of Beating Children

A Black male serving a life sentence for murdering a mother and her son gives us a valuable lesson on finding love where we least expect it.

I remember being spanked as a child, the last one being the most memorable because I had to strip down naked, exposing my bare 10-year-old body to the black leather belt that I had grown to hate. That day I didn’t shed a tear—I was too embarrassed to cry.

Any child growing up in a Black household has probably been whooped a time or two in an effort to be taught a lesson on how to respect your elders, the importance in obeying firmly-stated rules, and that there are consequences to every action. After the lashes were over and the tears stopped pouring down your cheeks, parents often made a point to tell you that they loved you and that they didn’t enjoy dishing out the punishment. As we get older we understand that it was ultimately our wrong actions that led to our pain, and that our parents were trying to protect us from potentially putting ourselves in a situation where someone who doesn't love us could harm us. But at the time, getting hit certainly doesn’t feel very loving, and little do we know that every lash in the name of love could've potentially became a part of the foundation of what we perceived love to be.

In the documentary Human, director Yann Arthus-Bertrand explores the dark side of mankind while shedding light on the best of it in an attempt to answer the universal and ancestral question of who we are and the purpose of our existence.

In one heart-wrenching clip, a Black male serving a life sentence for murdering a mother and her son gives us a valuable lesson on how beating children may communicate the wrong message about love.

“I remember my stepfather would beat me with extension cords, and hangers, and pieces of wood, and all kinds of stuff. After every beating he would tell me, “It hurt me more than it hurt you. I only did it because I love you.” It communicated the wrong message to me about what love was.

So, for many years I thought that love was supposed to hurt, and I hurt everyone that I loved. And I measured love by how much pain someone would take from me, and it wasn’t until I came to prison in an environment that is devoid of love that I began to have some sort of understanding about what it actually was and was not.

I met someone and she gave me my first real insight into what love was because she saw past my condition and the fact that I was in prison with a life sentence for murder, doing the worst kind of murder that a man can do—murdering a woman and a child. It was Agnes, the mother and grandmother of Patricia and Chris, the woman and child that I murdered, who gave me the best lesson about love because by all rights she should hate me, but she didn’t. Over the course of time and through the journey that we took it has been pretty amazing she gave me love. And she taught me what it was.”

Though most of us haven’t murdered anyone physically, many of us have murdered people emotionally, whether we intended to or not.

Many of us lack an understanding of love and in turn hurt others, and ourselves, and then wonder why there’s a deficiency of peace and happiness in our relationships, including with our children. And many times it dates back to the long-lasting scars of our own childhood.

There has been many conversations surrounding "beating" children, and whether it's an appropriate form of discipline or abuse. Opinions vary, but there is no denying that it can have an effect on a child as they transition into adulthood.  As a result, kids may carry that aggression shown by their parents into their own relationships and domestic disputes.

It is time for parents and educators across the U.S. to rethink our use of spanking as a form of discipline. Research clearly shows that spanking is ineffective at teaching children how to behave appropriately in the future. In fact, spanking actually increases children's disobedience, problem behavior and aggression. It also increases their likelihood of developing mental health problems such as depression or anxiety.

A Police One article titled, "Spanking and the Cycle Of Domestic Violence" also referenced a U.S. Department of Justice survey on the Consequences of Intimate Partner Violence, which found that:

While discipline is definitely important in training up a child, it's equally important to keep in mind the long-term impact it may have on the child emotionally and mentally as they grow and develop their own relationships.

Watch the testimony below and let us know your thoughts!

Beyoncé has had a lot to celebrate over the last few weeks after the release of her album RENAISSANCEand now her eldest daughter Blue Ivy Carter can join in on the fun. Blue reportedly has scored two gold RIAA (Recording Industry Association of America) certifications, one for “BROWN SKIN GIRL” from The Lion King: The Gift and “Blue” from Beyoncé’s self-titled album. These gold plaques only add to the 10-year-old’s other accolades.

How To Turn A Hobby Into A Lucrative Business

There's always talk about creating a side hustle and having multiple streams of income, but what happens when you're already super-occupied, booked, blessed, and busy with the 9-to-5 you have on top of other responsibilities like managing a household, pursuing higher education, or loving on bae? Well, one of the best ways to leverage a great side hustle opportunity is to look into monetizing things you already do as hobbies.

Upgrade Your Morning Routine With This Simple Journaling Practice

As a writer, it can be fairly easy to succumb to the dreaded phase of creative block in my process. When the ideas flow, they feel light and airy, and the words leave my mind with little to no effort. And when they don't, I can easily find myself staring at my laptop, both overwhelmed and underwhelmed by the blank page in front of me. Filling the blank space with words no longer feels like second nature, and where there once was ease, there is suddenly resistance. Whether it’s due to burnout or the ideas are just not as free-flowing as I'm accustomed to, brain fog is real. However, through trial and error, I have learned that it is very possible to access creativity by exercising those areas of the mind.

When it comes to power couples in the zodiac, there are instant matches that make for love and financial compatibility. Some zodiac signs work better together than others, and considering financial challenges tends to make or break relationships--finding your money match is important. Not only that but there are certain signs in the zodiac that can enhance your financial world, just by being in it. Planetary energy in certain areas of your birth chart can provide higher success rates and opportunities, and compatibility energy varies by degree.

Halle Bailey won our hearts alongside her sister Chloe when their cover of Beyoncé’s “Pretty Hurts” went viral when they were just teenagers, and from there they have become Grammy-nominated artists as the group Chloe x Halle thanks to albums like Ungodly Hour and The Kids Are Alright. Now, their fans have more to look forward to as Halle will be starring as the Disney princess Ariel in the live-action remake of The Little Mermaid.

Brandee Evans Says The "P-Valley" Finale Brought Her To Tears

The Do's & Don'ts Of Having Sex On The Beach

The Evolution Of Serena Williams

Tisha Campbell Opens Up About Finding Herself Again After Divorce