Why Cancel Culture Should Be #Canceled

In the age of Black Twitter, we have found ways to concisely express our feelings for good and bad behavior. #Goals. Mood. Delete this.

But lately, a new word has come to the foreground with a bitter and terminating consequence: Canceled.

Such and such did this? Canceled. So and so said that? Canceled. These days, we are quick to praise and even quicker to criticize.

Popularized by the hilarious Joanne the Scammer, "canceled" is said more often than not in jest. Even I "cancel" the Starbucks barista everytime my name is misspelled. In that sense, we can relegate it to just another word in the ever-changing and fleeting list of Twitter vocabulary trends. But where it gets tricky is when it's attached to the news of some unfavorable behavior, and most likely by the hands of a celebrity. Those less Twitter-literate will confuse the joke for a verdict.

And all of a sudden, backs are turned, pitchforks are out, and we all become judges in a moral indictment.

A while back, pop singer Camila Cabello was put on the stand. At the 2018 Grammy Awards, kindergartner and music royalty, Blue Ivy Carter, shushed her parents Beyonce and Jay-Z for applauding Camila Cabello after a speech honoring Dreamers. The moment was cute and instantly meme-worthy. But when asked about her reaction, Camila laughingly told BBC Radio 1 that "it was a moment of insecurity" and insisted that "kids usually love her."

Whether Camila genuinely felt insecure by the actions of a child is unclear. She chuckles throughout the interview, yet still has random moments of serious contemplation. Nevertheless, Twitter's reaction was a bit dramatic.

Many were upset that Camila would be "threatened" by a young black girl and argued her response was an example of racism. I'm not sure I would've come to that conclusion and I'm definitely not convinced she deserves to be #canceled. Side-eye, maybe. Eye Roll? Okay. But canceled feels heavy-handed.

In January, Vulture released an interview with Erykah Badu that ruffled more than a few feathers. The neo-soul songstress was uncharacteristically candid about her feelings regarding our culture's tendency to choose sides and cast judgement too quickly. A self-described "empath," she postulated that no one is inherently all-bad and there's humanity in everyone. Her position seemed valid enough until she used Adolf Hitler as a thoughtlessly terrible example.

While her remarks were problematic and gave me serious, serious pause, the subsequent firestorm on Twitter seemed unnecessarily aggressive. Some attributed her explanation to her being "fake woke" or "in the sunken place." Others excused her words elevating her to a higher moral conscious.

But the call to cancel her was loud and intense. 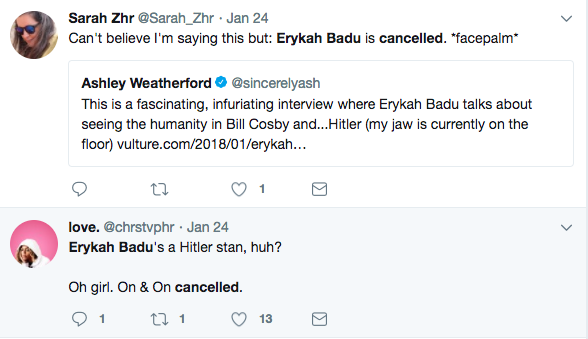 The most complicated story in recent months was that of comedian Aziz Ansari and his infamous date gone horribly wrong.

To summarize, Aziz invited a young woman back to his apartment after a seemingly nice dinner, only for her to experience a series of unwanted sexual advances. The woman, Grace, felt pressured to do more than she was comfortable with due to the apparent power dynamics at play by age and celebrity. The gray area here is understanding whether Aziz's actions were intentional or a true misreading of the situation as he explained to his date via text. Grace herself is unsure whether her verbal and non-verbal cues of discomfort were unnoticed or simply ignored.

It's a delicate situation and the overall reaction by the public was polarizing to say the least. With the unfortunate luck of being published at the height of the #MeToo and #TimesUp campaigns (a movement that Aziz himself is publicly in support of), not only was it a serious blow to his reputation, but it was potentially damaging to his career.

Sexual harassment is a serious and pervasive issue and it is high time we discuss these occurrences often and critically. The culture is shifting rapidly and it's easy to get caught up in the tornado of differing perspectives. But should he be canceled? I think it's fair to raise this question, especially since the story goes against what we know to be true of Aziz. Up until that point, the award-winning actor and writer was known for his feminist views. He co-authored Modern Romance, an investigative book that used research to explore the shifting landscape of dating culture over the past decade. One would hope a person this self-aware would be more conscious of how his actions affect other people.

So, how do we reconcile the dissonance between that story and the person he's proven to be thus far?

We need to learn how to discern bad behavior from a bad person.

We tend to take things at face value without contextualizing the whole picture. I'm not suggesting that everyone should be free from criticism. In fact, the opposite is true. We should all be willing to critique and evaluate. But there are healthier and more productive ways to hold people accountable without writing them off completely. I propose we find funnier, less permanent ways to call out problematic behavior. "Suspended until further review," perhaps? Or we could even put people in "time-out."

Either way, I think we're treading a fine line by policing the morality of others.

Let Camila, Erykah, and even Aziz be conversation starters as opposed to conversation enders. We're all learning and unlearning toxic behaviors and ideas. Let's practice having more teaching moments and less class dismissals.

Anndi Jinelle is a part-time creative and full-time corporate cog in the machine living in Brooklyn, NY. This 20-something spends most of her days going from coffee to wine, moving closer to her truth, and watching way more TV than is humanly possible. Catch her on Twitter @seranndipity.

7 Spiritual Principles About Sex That Married Couples Should Never Forget

You Want To Cheat On Your Husband. How To Fight The Urge.

"Every day I feel like I get smarter and stronger and I have to because I have to take care of me, my son, and my career."

12 Different 2021 Home Décor Trends (That You Can Afford)

What If You & Your Partner Aren't On The Same Level Sexually?