Drake loves him some strippers. That's a fact that's known as much as the answer to 1+1. But it looks like his love for strippers may have gotten him in some trouble because one of his chicks is alleging that he sent some bullies to her door, among other things.

Houston stripper Jhonni Blaze is claiming Drake put a price on her head and got her fired from her job recently after she had sex with the rapper and he thought she was going to go public with the info.

According to a police report filed in Houston, Jhonni alleged that after her fling with Drake, he began texting her "angrily," and several people from his camp came to her house and threatened her life.  She was also fired from her job at V LIVE in Houston after insinuating she may be pregnant.  Earlier in the week, screenshots of Jhonni answering "Maybe" when someone asked her on Instagram if she was pregnant by Drake, leaked onto the web. She also wrote in the message:

We messed around and then he switched up on me messing with everyone. I think he thought I was one of the others that expose him and I didn't so he threatened to send someone for me and guys were looking for me at my job and knocked my door down looking for me at home. Said he put a price on my head smh and I never once exposed him. He got mad because I caught him in a lie and he started doing all of this so I'm calling the police for my safety.

According to Baller Alert who spoke with Jhonni by email, the drama all started after she approached Drake about him seeing Lira Galore, another stripper at her job:

In the Baller Mail Jhonni Blaze tells BA exclusively that she and Drake spent an entire week together where she played the piano for him, partied with him and had deep conversation. She says Drake charmed her and ever since the passing of her ex-boyfriend, she has never had a man be so kind and sweet to her. "If you notice, I'm not like Lira. I didn't post [about us] because I dont need the attention."

They exchanged numbers, Drake giving her his iPhone and Blackberry contact information and before jetting off, he and Jhonni had weekend long sex-capade UNPROTECTED. "I asked him why he messed with me with no condom, what if I get pregnant. He said 'I'm not worried about that, I just want ot give you the best of me'. He wanted to feel all of me. He ate me out. He kissed me. He's a loving sexual person," she tells Baller Alert. Jhonni does admit that she and Drake got into a heated argument in the club on his last night in town, over him talking to another girl while they were together. He later apologized via text messages. This isn't the only time Drake has been accused of arguing with women in the club.

She also says that he made plans to fly her to Toronto later in the month but instead ended up flying her friend out just days later. Jhonni says that when she caught wind of the news that Lira was in Toronto, she confronted Drake about it to which he denied it and tried to make her come off as crazy. She says that he called her a b****, told her that she was going to look stupid when the truth came out and to stop contacting him. "My city of Houston tore me apart on the radio like, 'Jhonni didn't know he was a hoe.' I took off a week from work and I'm the topic of my city, they're laughing because I'm walking around with this fool. He was kissing me in my job, made the DJ switch the song to my name, I have a video of us playing piano together, this is embarrassing," Jhonni explains. She also says that Drake even went as far as having her talk to his mother to validate his side of the story. That was until he posted a photo of he and Lira having drinks, then there was no more denying it. Once the pics were posted, Drake's tune changed and he assured Jhonni that Lira was only in town to film a music video and that he never had sex with her.

Drake and Lira (posting photos from the same restaurant in Toronto)

According to a few other girls who've had their dealings with him, the music video thing is sort of his M.O.

Ever after the news broke, Jhonni took to her instagram page several times to acknowledge her hurt and embarrassment, as well as reiterate that she had no intentions of putting him on blast -- despite what she likely would have done in the past. That's when things got messy. According to Jhonni, Drake wasn't buying it and instead, made threats on her life.

Jhonni explains to Baller Alert that Drake made calls and sent men to her place of employment in an attempt to shake her up. Jhonni was not working that night and when they could not find her, instead sent their threats through her friend. The goons warned that Jhonni was going to "catch an issue." According to Blaze, Drake put a price on her head. According to Jhonni they even went as far as kicking down the door to her apartment where she, a female friend and a 10 month old child were staying. Jhonni said she feared so much for her safety that she went to the police and filed a police report.

Jhonni also leaked a few text exchanges between her and Drake: 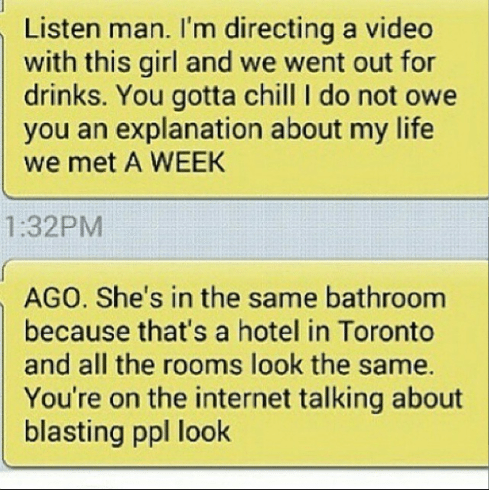 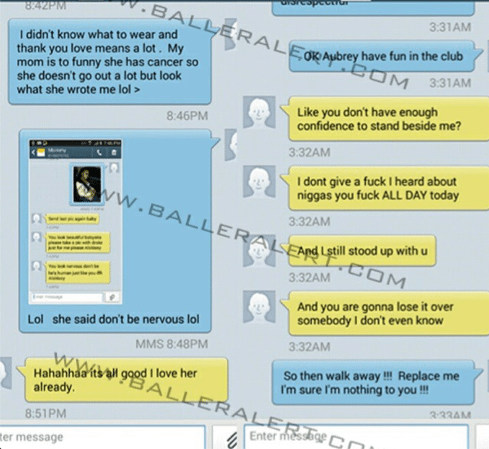 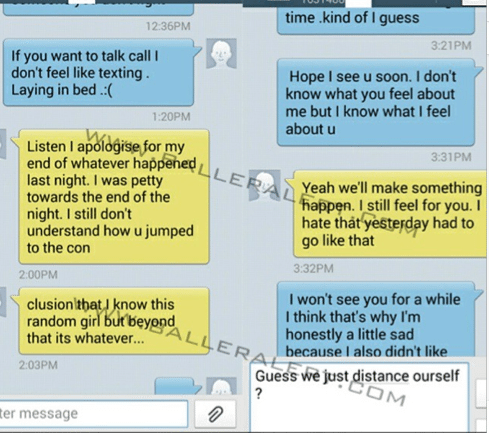 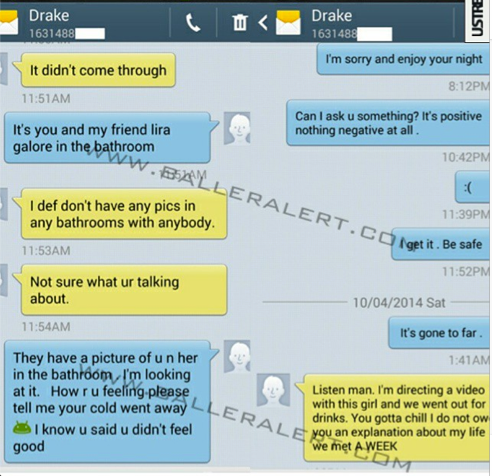 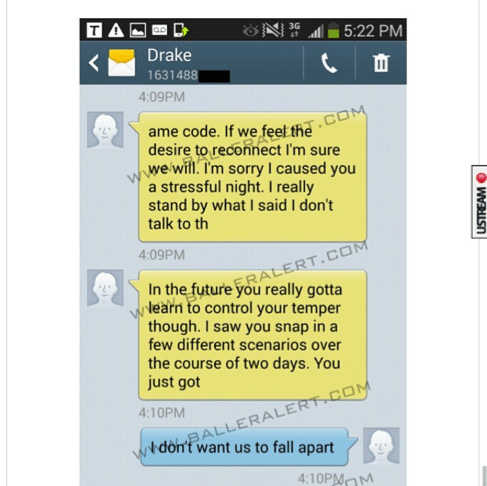 This is all incredibly messy.

Back in November, Drake allegedly visited V LIVE in Houston with Rihanna and the pair spent $15,000.  Johnni Blaze herself told E! News that she made $10,000 after giving the pair lap dances for over three hours that night.  It's unclear if she met and exchanged numbers with Drake that night or when he visited the club at a later date.

Meanwhile, Jhonni did an interview (or phone call rather) with the folks over at ATLNightspots to clear up a few rumors, and she says that she is not pregnant by Drake.  She only said "maybe" to a fan's pregnancy question because she can say "whatever the f-ck she wants."  She also said she only messed around with him for a weekend.

Long story short, if Drake (or famous folks in general) don't want their private business all over the block, perhaps they may want to think about reevaluating the type of women they are dating. Till this day, Rihanna still hasn't claimed or mentioned Drake.  Now that's discreet.

Bless Up: 8 Scriptures To Remind You That God Sees You

‘The Photograph’ Is A Visual Sanctuary Where Dark Skin Women Are Extolled As Soft, Vulnerable And Deserving Of Love

What Is A Super Orgasm & How Can I Have One?

"I feel like a woman could bring substance into my life. She could be my foundation. She could recharge me when I need it and we recharge each other."

Michelle Obama Gets Real About Confronting Her Insecurities & Self-Doubt

This Is How To Naturally Treat Premature Greying

9 MCMs Give Their Thoughts On Casual Dating, Courtship & Commitment

Opening Your 7 Chakras Can Transform Your Mind, Body & Spirit